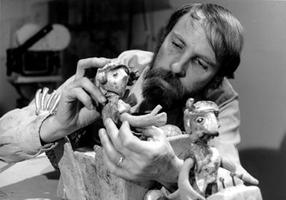 Jacobus Hoedeman, "Co," director of animated films (born at Amsterdam, Holland 1 Aug 1940). Trained in photography, Jacobus Hoedeman made his first animated film in 1956. He immigrated to Canada in 1965 and soon joined the NATIONAL FILM BOARD OF CANADA. Two years later he directed his first film. While studying in Czechoslovakia in 1971, he learned the technique of animating puppets, an art in which he has since become a master. Later he animated several Inuit legends. In 1977 Hoedeman produced Le Château de sable, for which he won an Oscar. He revived the characters from this film in Le Trésor des Grotocéans (1980).

Hoedeman revised his methods and style in Mascarade (1984). In Charles et François (1987), he touched on the theme of old age and in La boîte (1989) on that of apprenticeship and discovery. In this fable, he mixes puppets, real action shots and computer-generated images. L'ours renifleur (1992), co-directed with aboriginal inmates of a pentitentiary, deals with the problem of intoxication caused by gasoline sniffing in FIRST NATIONS communities. As soon as he completed Le jardin d'Écos (1997), he began Ludovic - Une poupée dans la neige (1998), which aims the cinema directly at the young by taking up the theme of the relations between a child and his favourite toy. By inverting the traditional framework of the story (it is a bear cub that plays with a doll), Hoedeman captures all the charm of the child's universe, full of mystery and magic. In his films, Jacobus Hoedeman shows himself to be a story-teller articulating a vision of the world in deceptively transparent fables.