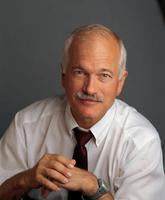 Son of Robert Layton, a former prominent Québec Liberal who later became a Conservative MP and cabinet minister, Jack Layton graduated in political science from McGill University with a BA (1970) and from York University with an MA (1971) and a PhD (1984). His PhD thesis dealt with globalization. Layton taught at Ryerson Polytechnic, York University and the University of Toronto. Along with Olivia Chow, his wife and fellow councillor, Layton served as a Toronto city councillor (1982-1991 and 1994-2003) and was part of a coalition of NDPers and progressives. Layton placed second in the Toronto mayoralty race in 1991 and ran unsuccessfully as a federal NDP candidate for Parliament in 1993 and 1997. He served on the federal board of the Climate Change Protection Program (1998-2001) and as president of the Canadian Federation of Municipalities (2001-2002).

Despite having no seat in Parliament, Layton entered the 2003 federal NDP leadership race and won a convincing first-ballot victory over 5 rivals, including 3 sitting MPs, subsequently replacing Alexa McDonough as leader on 25 January 2003. Confirming his reputation as a coalition builder, he won strong support from both the party's left wing and so-called establishment. His victory signalled a desire by party members to move the party more to the left, to be more attentive to social movements, to give greater attention to issues confronting large urban centres and to have a leader who could attract greater publicity for a party in fourth place in Parliament. 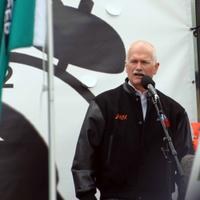 Leading up to the 2004 campaign, the energetic Layton attracted media publicity, and the party rose in the polls. In the 2004 election the NDP recorded its best vote count in over a decade (almost doubling its votes to 15.7%), although the number of seats won increased only to 19, significantly less than the party had anticipated. Layton was personally elected as MP in his Toronto riding of Toronto Danforth, but his wife, running elsewhere in Toronto, was not. In the minority Parliament of 2004-2005, the NDP was able to play a key role. The NDP's amendment in the spring of 2005 to the Liberal government's budget generated more spending for infrastructure and social programs. The NDP also successfully lobbied the Martin government to resist involvement in the US missile defence system and to pass the same-sex marriage legislation.

Layton's constructive role amidst the turbulent minority Parliament contributed to the growth in his profile and positive assessment by the public. In the 2006 election, the NDP, under Layton, continued to make gains and rose in percent vote to 17.5% and in seats to 29. With the election of his wife to Parliament in 2006, Layton and Chow were a powerful and charismatic couple in national politics. In the leadership convention that followed, Layton received an approval rating of over 90% from party members, and his party continued to make strides in the areas of peacekeeping overseas, environmental issues and amendments to the Clean Air Act, and in the issue of residential schools, which resulted in an apology from the federal government in June 2008.

The election of 2008 returned Layton and the NDP to Ottawa with a stronger team to take on the larger Liberal opposition party and to exert pressure against the Conservative government led by Stephen Harper. Layton pushed the Conservatives on issues that included health care wait times, global warming, jobs and affordability. In May 2010, the House of Commons passed Layton's Climate Change Accountability Act, which aimed to make Canada the first to adopt scientific targets to cut climate-changing emissions by 80% before 2050.

Following the 2008 election, the Conservative government opened Parliament with an announcement of temporarily suspending federal employees' right to strike and denying monetary subsidies for political parties. The leaders of the other three parties responded by announcing that they could not support such measures. Jack Layton, along with Liberal leader Stéphane Dion and Bloc Québecois leader Gilles Duceppe, negotiated terms to form a coalition to replace the Conservatives in the House. In early December 2008 they signed an accord for an agreement on a coalition government. They were expecting Governor General Michaëlle Jean to replace the Conservatives with the coalition government, rather than dissolve Parliament and call another election. Except for Québec, the nation opposed the coalition. Harper applied to the governor general to prorogue Parliament until January, when he would introduce the new budget; on 4 December Jean granted his request.

In March 2011, the Conservative government was defeated in a non-confidence vote by all three opposition parties on the grounds of contempt of Parliament. Parliament was dissolved and a federal election called. Layton and his NDP team wasted no time getting on the campaign trail; the day after the election was announced they were on the stump, first in Ottawa and later in the day in Edmonton. Layton performed well in the leaders' debates and in Québec, then led the NDP to a landmark victory in the election on 2 May to gain a record number of seats in the House of Commons and become the Official Opposition. Significantly, the party also made a breakthrough in Québec, having entered the race with only one seat in that province and winning 59 of the province's 75 seats, reducing the Bloc to only four seats. 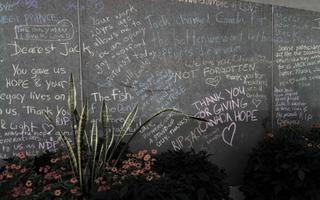 Jack Layton had announced in February 2010 that he had been diagnosed with prostate cancer. He undertook the 2011 election campaign with the same apparent vigour and enthusiasm he had displayed throughout his career. However, in July 2011 he announced that he would be taking a temporary leave from his duties to fight a second cancer. He recommended Nycole Turmel as interim leader, and stated that he intended to be back in the House when Parliament resumed on 19 September. Layton, however, succumbed to the disease only a month later. During his final days he composed a letter to be read upon his death, urging all cancer sufferers to remain strong, his party to continue to work toward its goals, and all Canadians, young people in particular, to remain positive about a better future.