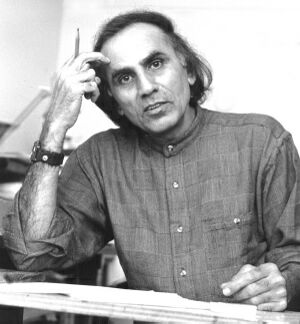 Divine Fate, 1997.
(photo by Lois Siegel)
Ishu Patel, animator, instructor (b at Jalsan, India 20 April 1942). Ishu Patel received a Bachelor of Fine Arts from Maharaja Sayajirao University in Baroda in 1963. He completed his graduate studies in visual communication at the National Institute of Design in Abmedabad, and went on to study advanced graphic design in Basel, Switzerland. With the assistance of a Rockefeller Foundation scholarship, he found a congenial working environment at the National Film Board of Canada (NFB) in the early 1970s. There he created abstract worlds for a brilliant series of films, using beads, intricately designed backgrounds and backlit Plasticine figures.

From his first film for the NFB, How Death Came to Earth (1971), based on Indian creation myths, through The Bead Game (1977), where thousands of beads are painstakingly arranged and manipulated into constantly changing shapes (Oscar nomination for animated short; BAFTA for short fiction film), Afterlife (1978), which offers an impressionistic view of death and dying (Canadian Film Award; Montréal World Film Festival Grand Prize for short film), to Divine Fate (1993) and The Tibetan Book of the Dead: The Great Liberation (1994), Ishu Patel has pursued his project of animating religious/mythical concepts and tales with great beauty and style.

His masterpiece remains Paradise (1984; animated with George Ungar), a stunningly beautiful piece of animation that uses cutouts, multiple exposures and backlit perforated backgrounds to tell a fable with a simple but strong moral message. Within an emperor's crystal palace lives a bird with spectacular plumage. Outside, a blackbird watches enviously and strives to obtain what he covets, only to discover that a golden cage is no substitute for the freedom of the open skies. The film received an Oscar nomination for animated short, the Silver Bear for best short at the Berlin International Film Festival, and the Jury Prize at the International Animated Film Festival in Annecy, France.

In addition to his work with the NFB, Ishu Patel has produced work for NHK of Japan and Channel Four of Britain. He has also created French-language animated segments for the long-running children's program Sesame Street. After leaving the NFB he secured a position as a tenured professor, teaching experimental animation at the University of California in Los Angeles, and opened his own studio in Canada.