The Tlingit (sometimes also known as the Łingít) are Indigenous peoples of the Pacific Northwest Coast of North America who share a common cultural heritage. Tlingit means “people of the tides.” In the 2016 Census, 2,110 people identified as having Tlingit ancestry. 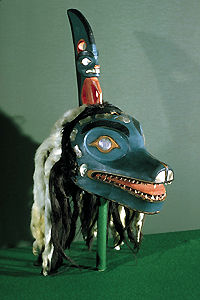 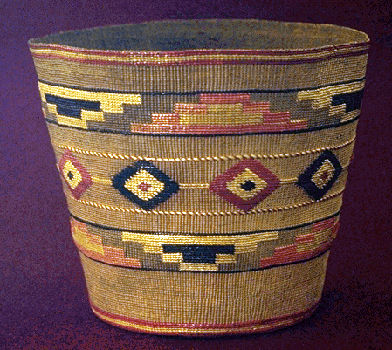 This Tlingit basket was made from spruce roots.
PreviousNext

Tlingit territories are located in the Pacific Northwest and cover parts of present-day British Columbia,  Yukon and Alaska. While some Tlingit traditionally occupied areas along the coast, others made their homes further inland (See also Indigenous Territory). In the 2016 census, 2,110 people identified as having Tlingit ancestry.

The resources of the coastal regions and the boreal forest around the large lakes forming the headwaters of the Yukon River have always been important to the Tlingit way of life. In the 19th century, most of their ancestors, some of whom had come from the coast, lived on the upper reaches of the Taku River that flows into the Pacific Ocean near Juneau, Alaska. Inland Tlingit depended heavily on annual salmon runs in the Taku Basin. They also hunted caribou, moose,  sheep and goats, as well as small game, especially marmots and birds.

The Tlingit are a matrilineal nation divided into moieties (kinship groups). Each group consists of many clans. The clans of the Teslin Tlingit, for example, include Kùkhhittàn (Raven), Ishkìtàn (Frog), Yanyèdi (Wolf), Dèshitàn (Split Tail Beaver) and Dakhl’awèdi (Eagle). Tlingit in other regions may have different clans. These groups structure rank, marriage and naming practices.

Social relations rested on reciprocal obligations between members of clans in opposite kinship groups. The most important of these obligations were associated with death and memorial feasts or potlatches that followed a year or so afterwards and were marked by rich oratory, singing and dancing as well as symbolic visual display. Tlingit living inland or on the coast often married one another. They also intermarried with other Indigenous peoples living nearby, such as the Dene (Athapaskans) and Tahltan.

With authority limited to each clan, there were no band chiefs until after the Second World War, when the Department of Aboriginal Affairs and Northern Development created elected band chiefs and councils (See also Federal Departments of Indigenous and Northern Affairs). Today, the Tlingit in Teslin have their own judicial system.

The Tlingit became increasingly accustomed to European society and culture following an early 20th-century gold rush, the development of mining activity near  Atlin, British Columbia, and the building of the Alaska Highway in 1942. Despite all this, the Tlingit have reclaimed traditional arts and set up commercial businesses, such as canoe and  snowshoe manufacturing.

Tlingit (or Łingít) is the name of the language spoken by the Tlingit peoples. Tlingit is primarily spoken in Teslin and Carcross,  Yukon. Tlingit is part of the Na-Dene (or Dene) language, which is part of the Athapaskan linguistic family. Tlingit is spoken mostly in Atlin in northernmost British Columbia and Teslin in neighbouring Yukon. According to the 2016 census, 255 people identified as Tlingit speakers, with 76.5 per cent living in Yukon and 21.6 per cent in British Columbia.

During the late 1800s, the Tlingit moved to the Yukon to access its rich fur resources, but also because of the Klondike Gold Rush of 1897–99. Their semi-nomadic subsistence way of life allowed them to adapt well to the Yukon. In the Yukon, furs were more numerous, but salmon resources were less dependable. Their technology, like that of neighbouring Athapaskans, such as the Tutchone, was well suited to the hard conditions of the subarctic Cordillera.

The Tlingit sometimes fought with the Tahltan over rights to fish salmon and to control the flow of fine furs from the interior to the coast. Both groups sought fur of the Liard River Kaska, but were themselves dominated by Tlingit living on the coast who controlled access to European fur traders.

In 1995, after more than two decades of negotiations, the federal and Yukon governments’ Teslin Tlingit Council Final and Self-Government agreements came into effect. The agreements govern more than 10,000 km2of Teslin Tlingit territory and include aspects of the traditional clan culture.