The pre-Confederation colonies of British North America included New Brunswick, Nova Scotia, Prince Edward Island, Canada West/Upper Canada (Ontario) and Canada East/Lower Canada (Québec) — British Columbia did not become a Crown colony until 1858. Before 1867, legislation outside British Columbia and Nova Scotia did not explicitly deny the franchise to Indigenous peoples. There were, however, a variety of qualifications for voters, such as age, British citizenship, ownership of specified property and payment of taxes. Status Indians lived on reserve lands owned by the Crown and received annuities from Indian Treaties. These liabilities effectively disqualified them from exercising the franchise.

There were exceptions to the rule. If male Indians in Canada West and Canada East met the criteria set down in An Act to Encourage the Gradual Civilization of the Indian tribes in this Province (1857), and later, An Act respecting Civilization and Enfranchisement of certain Indians (1859), they could voluntarily relinquish their Indian status (a process called enfranchisement). They would then be able to vote, as long as they met existing qualifications. This legislation was in accordance with the government’s pre-Confederation policy of assimilation. Indian peoples were encouraged to give up traditional ways, acquire property and assume the responsibilities and civil rights of British subjects. In the view of government officials, Indian peoples were in the process of becoming citizens.

The Métis faced no legislative restrictions on voting. If they were engaged in the political process, they could vote if they possessed the basic qualifications. The Inuit, however, did not have the right to vote because they inhabited northern lands that were under the direct political control and authority of the Hudson’s Bay Company.

The 1876 Indian Act consolidated laws affecting Indians. Section 86(1) introduced the principle of compulsory enfranchisement, that said any Indian who received a university degree or became a medical doctor, lawyer or clergyman, was automatically enfranchised. The termination of Indian status meant that, if property qualifications were met, an Indian could vote in federal elections. Few Indians met the criteria for compulsory enfranchisement. Therefore, most Indians were still barred from voting federally.

In the spring of 1885, Prime Minister Sir John A. Macdonald introduced the Electoral Franchise Act. Macdonald was prepared originally to extend the federal vote to all Indians — whether they were enfranchised or not — under the same conditions imposed on British subjects. However, after the North-West Resistance, the legislation was amended to exclude all Indian peoples resident in “Manitoba, British Columbia, Keewatin, and the North-West Territories, and any Indian on any reserve elsewhere in Canada who is not in possession and occupation of a separate and distinct tract of land in such reserve, and whose improvements on such separate tract are not of the value of at least one hundred and fifty dollars.” These arrangements remained in effect until 1898, when the Liberal government of Wilfrid Laurier, fearing the vote of Tory Indians (those who supported the Conservative party), reverted to the arrangements that existed before the Electoral Franchise Act.

With the outbreak of the First World War in 1914, many Indigenous peoples volunteered for military service in Canada and overseas. Under the provisions of the Military Voters Act of 1917, Indians serving in the armed forces could vote in federal elections until they were demobilized. There was little pressure on the federal government, either from the general public or Indigenous peoples, to extend the franchise. This situation remained unchanged through the Great Depression.

In 1942, the federal government established a House of Commons Special Committee on Reconstruction and Re-establishment. The purpose of the Committee was to look into the prospective economic, social, and political conditions in postwar Canadian society. The advent of the welfare state in 1942 with the introduction of unemployment insurance also necessitated an assessment of existing policies and programs.

The Committee determined that the most neglected social group in Canadian society was Indigenous peoples. The economic and health conditions on reserves were deplorable, and federally implemented educational and administrative policies were culturally destructive. These were issues that pan-Indigenous organizations such as the League of Indians of Canada sought to address during the interwar years. Indigenous veterans of the Second World War, who served in the Canadian armed forces with distinction and received the federal franchise during the war as a result, returned to Canada seeking social and political change. Some sought to extend the right to vote to all Indigenous peoples (see Aboriginal People: Political Organization and Activism).

In 1946, Parliament established a Special Joint Committee on the Indian Act. Indigenous leaders, representing First Nations and political associations, were called to testify. Indigenous opinion was divided on acquiring the federal vote, fearing loss of Indian status, loss of treaty rights and loss of exemption from taxation. After three years of public hearings, the Committee produced a final report in 1948. The goal of Indian policy was recast from assimilation to integration. In view of the new policy slant, the Committee recommended that Indian peoples be allowed to vote in federal elections.

Politicians were apprehensive about sharing power. In May 1950, Prime Minister Louis St-Laurent consulted his cabinet colleagues concerning Indigenous suffrage. Walter Harris, minister of citizenship and immigration, circulated a memorandum showing the “substantial concentrations of Indians” in certain ridings across the country, including Skeena, Kamloops, Athabaska, Meadow Lake, Churchill, Norquay, Algoma East, Brant-Wentworth, Kenora-Rainy River, Port Arthur, and Châteauguay-Huntingdon-Laprairie. C.D. Howe, minister of trade and commerce, effectively put an end to the voting initiative, fearing that Indians living on reserves in proximity to his Port Arthur riding might tip a federal election in favour of the Co-operative Commonwealth Federation (CCF).

Consequently, status Indians were not eligible to vote in federal elections throughout the 1950s. Their opinion continued to be divided on its perceived benefits. With the election of John Diefenbaker’s Progressive Conservative government in June 1957, the political landscape changed. Diefenbaker immediately appointed James Gladstone, a Kainai (Blood) Indian from the Treaty 7 area of southern Alberta, to the Senate. Gladstone was Canada’s first Indigenous member of Parliament. Diefenbaker then turned his attention to administrative and political reforms.

In 1950, the Inuit were officially qualified to vote in federal elections. However, most Inuit had no means to exercise the franchise because they lived in isolated communities. Until ballot boxes were placed in more Inuit communities in 1962, the Inuit were effectively unable to vote. For this reason, many cite 1962 as the first year in which Inuit gained the franchise. 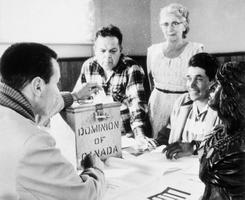 In Hiawatha Council Hall on Occasion of a Federal By-election.

Prime Minister John Diefenbaker, a civil libertarian, and long-time critic of Indian administration, established a Joint Committee of the Senate and House of Commons on Indian Affairs in 1959 to investigate Indian administration. In early 1958, Diefenbaker’s government began drafting the Canadian Bill of Rights. With the Bill of Rights’ emphasis on equal rights for all Canadians, Indians could hardly be denied the right to vote.

On 31 March 1960, portions of Section 14(2) of the Canada Elections Act were repealed in order to grant the federal vote to status Indians. First Nations people could now vote without losing their Indian status.

Politicians were also concerned about the enfranchisement of Indigenous peoples. While they wanted Indigenous peoples to integrate into postwar Canadian society, they feared their political impact. Diefenbaker, like St-Laurent, was no exception. He quietly engaged army veteran Chief Joseph Dreaver of the Mistawasis First Nation to visit reserves in Saskatchewan, supposedly to explain the findings of the Joint Committee of the Senate and the House of Commons on Indian Affairs. However, Dreaver’s real assignment was to assess the electoral strength of the recently formed New Democratic Party (formerly the CCF) among Indigenous peoples. Internally, Indian Affairs Branch officials, as in 1950, examined federal ridings where there was a significant Indian population in an attempt to assess the impact of the new “Indian vote.”

The vote for Indigenous women (First Nations, Métis and Inuit) has been framed by the issues of colonialism and gender discrimination. The process of receiving the vote has been connected to enfranchisement, both voluntary and involuntary, meaning that Indigenous women were afforded political participation and Canadian citizenship rights at the cost of Indigenous rights (see Indigenous Women and the Franchise).

Voting in Provincial and Territorial Elections

As in federal elections, the Métis could vote in provincial elections if they met voter qualifications, such as age and ownership of property.

At various times after Confederation, all provinces except Nova Scotia and Newfoundland passed legislation that in one way or another disqualified status Indians from voting. However, after the Second World War, status Indians could vote in all provincial and territorial elections: British Columbia (1949), Manitoba (1952), Ontario (1954), Saskatchewan (1960), New Brunswick (1963), Prince Edward Island (1963), Alberta (1965), Québec (1969), the Northwest Territories and Yukon (1960).

Inuit became eligible to vote in territorial and provincial elections in the 1950s. In the 1960s, the Inuit were encouraged to participate in local government and administrative structures such as the Government of the Northwest Territories’ regional councils (Baffin Regional Council), town and hamlet councils, and housing authorities. Today, the Inuit form the majority of voters in four northern regions created as a result of comprehensive land claim settlements: Inuvialuit, Nunavut, Nunavik and Nunatsiavut. In addition, the Nunavut territory, which was established by the Nunavut Act in 1993 and became a constitutional entity on 1 April 1999, is another example of the achievements of Indigenous self-government.

Impact of the Charter of Rights and Freedoms (1982)

Universal suffrage at the federal and provincial levels of government is enshrined in Section 3 of the 1982 Charter of Rights and Freedoms, which states, “Every citizen of Canada has the right to vote in an election of members of the House of Commons or of a legislative assembly and to be qualified for membership therein.” This clause applies to First Nations peoples, Métis and Inuit.

Federal Indian legislation in 1869 and 1876 formed the basis for First Nations governance. The powers of chiefs and councils expanded gradually over the years. In recent decades, a variety of Indigenous self-government models have emerged.

According to Indigenous and Northern Affairs Canada sources, approximately 235 First Nations in Canada conduct elections under the Indian Act and Indian Band Election Regulations. Thirty-eight are considered self-governing, while the remaining First Nations select their leaders according to their own community or custom leadership selection process. The First Nations Elections Act came into force in 2015. First Nations are determining whether this new election system suits community needs.

It took 84 years after Confederation for status Indians and other Indigenous groups in Canada to gain the franchise. Today, First Nations, Métis and Inuit peoples not only vote but also participate in federal, provincial, territorial and local politics. The history of Indigenous suffrage in Canada demonstrates how concepts of citizenship, as defined by gender, ethnicity and social class, among other factors, have become more inclusive. It also illustrates that, for many Indigenous peoples, gaining the right to vote has not solved pressing socio-economic and socio-political issues, such as disputes over land titles and control over resources. Indigenous suffrage is part of a larger discussion about Canadian citizenship, Indigenous sovereignty and Indigenous rights.