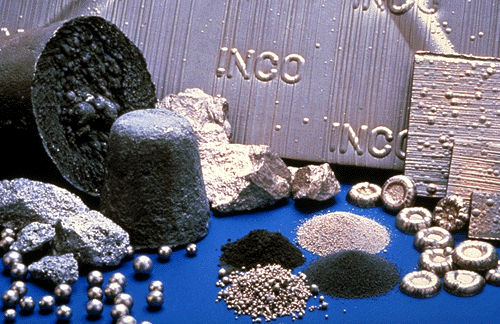 Some of the metals mined near Thompson, Man (courtesy City of Thompson).

Inco Limited was a Canadian mining company and the world’s leading producer of nickel for much of the 20th century. In October 2006, Inco was purchased by the Brazilian mining company Vale for $19.4 billion. The company is now a fully owned subsidiary called Vale Canada Limited; it is based in Toronto and is responsible for Vale’s base metal mining operations worldwide.

Inco grew out of the nickel mines in Sudbury, Ontario, which remains one of Vale’s largest mining projects worldwide. The extraordinary base metal deposits there — the product of a prehistoric meteorite collision — were discovered in the 1880s and extracted in modest quantities throughout the 1890s. The Canadian Copper Company, working in partnership with the New Jersey-based Orford copper refinery, rapidly established a monopoly on Sudbury’s mineral deposits. In 1902, with the financial backing of American banker J. P. Morgan and Charles Schwab of Carnegie Steel, the Canadian Copper Company and Orford merged to create the International Nickel Company, later renamed Inco.

In 1916, when Canada was deeply engaged in the First World War (and the United States was not) the company was accused of selling its Canadian-sourced metals to Germany. In response, the Governor General issued an order-in-council banning any nickel exports outside of the British Empire. Consequently, that year Inco formed a Toronto-based Canadian subsidiary, the International Nickel Company of Canada. Because the company could no longer export the raw material to New Jersey for refining, it opened a refinery in Port Colborne — a town on Lake Erie, approximately 30 km southwest of Niagara Falls.

The company was restructured in 1928, when the Canadian subsidiary became the parent company through an exchange of shares, and additionally acquired its primary competitor, a British firm active in the Sudbury basin called the Mond Nickel Company. Throughout the Second World War, its operations expanded rapidly as it produced hundreds of thousands of metric tonnes of nickel and copper.

By 1950, Inco controlled almost 90 per cent of world nickel production outside the communist states. In the subsequent decades, the company retained its leading position in the nickel market, in addition to its significant market shares in copper, precious metals and cobalt. Through its subsidiaries Inco Alloys International and Inco Engineered Products Limited, Inco additionally became the world’s largest supplier of wrought nickel alloys and a leading manufacturer of specialized forged components made from alloy materials.

In Canada, it expanded its mining operations by opening nickel mines in Thompson, Manitoba, in 1961, and at Voisey’s Bay, Labrador, in 2005. Beginning in the 1960s, the company aggressively expanded its international presence, and by the time of the Vale acquisition in 2006, Inco held operations in Indonesia, the United Kingdom, South Korea, Taiwan, Japan and the Pacific island of New Caledonia.

Relations between the labour movement and Inco (and later Vale Canada Limited) have at times been tense. At company facilities in Sudbury and Port Colborne, nine walkouts occurred between 1958 and 2010. The most significant of these occurred in 1978–79, when workers with the United Steelworkers of America struck for 261 days — the largest strike in Canadian history in terms of lost labour hours (the 2009–10 strike would last longer, but with more people working for Inco in 1978–79, that year’s strike represented a higher loss of working hours). Following a series of major layoffs, the strike was a disaster for Inco’s revenue stream and its public image, and the union made major gains in the final settlement — in particular by winning full pensions for members who had worked for 30 years or more.

Tensions in Sudbury rose once again in April 2009, when the company announced temporary layoffs affecting 4,000 workers. In July, the union began a strike that would last a full year, as negotiations remained at an impasse. The dispute became especially bitter when Vale hired strikebreakers (commonly known as “scabs”) to work in place of the union members.

Historically, the environmental impact of Inco’s operations has also upset communities and governments alike. Throughout the postwar period, the company’s Sudbury operations emitted tremendous quantities of sulphur dioxide, which causes acid rain. Following extensive negotiations with the Ontario Ministry of the Environment, in the mid-1980s Inco agreed to spend approximately $500 million to modernize its refinery and reduce the emissions. Several major environmental problems persist, however, including locals’ elevated exposure to lead, arsenic and airborne nickel, which may contribute to the elevated rates of cancer and respiratory disease in the Sudbury area.

A company in control of a product or service, without competition from others.

A company that controls other companies (called subsidiaries).

A unit of ownership in a company.

A material made by combining two or more metals, or a metal and a non-metal.