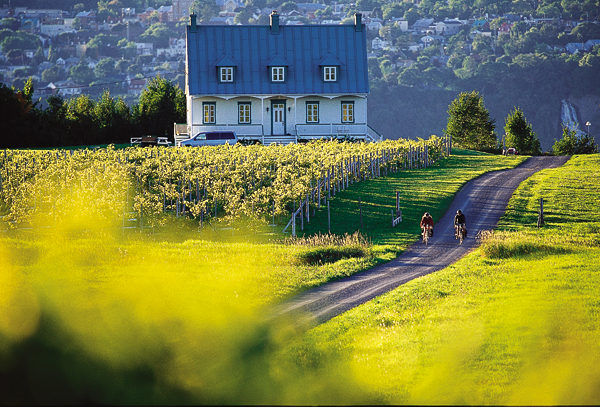 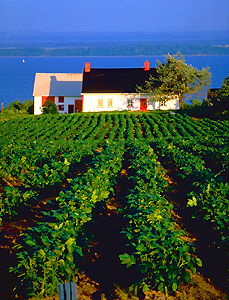 Ile d'Orléans is the largest island in the St Lawrence River after the island of Montréal (photo by Sherman Hines/Masterfile).
PreviousNext
Île d'Orléans, 190 km2, 33.3 km long by 8 km wide, is situated just downstream from QUÉBEC CITY in the ST LAWRENCE RIVER.

Description
The island is connected by a suspension bridge to the North Shore near CHUTE MONTMORENCY. The largest island in the river after Île de Montréal, it is a relatively level plateau, 137 m at its highest point, and is quite steep-sided. It is surrounded by wide tidal flats on the north and narrow flats on the south. The central part is wooded; the island is very fertile and drained by the Maheu, la Fleur, Dauphine and du Moulin rivers.

History
Jacques CARTIER called it Île de Bacchus in 1535 because of the vines growing there, and rebaptized it Île d'Orléans in 1536 to honour the duc d'Orléans. In 1636 the island was granted to 8 associates by the Compagnie de la Nouvelle France. It became Île Sainte-Marie during the HURON settlement of 1650-57. These first farmers, installed on land belonging to Éléonore de Grandmaison at the far upstream end, were massacred in 1656 by the IROQUOIS. Land clearing began again in 1660.

The parish of Sainte-Famille was founded in 1661 and the first church built in 1669 (see RELIGIOUS BUILDING). Jean de LAUSON, governor of New France, fell victim to Iroquois in 1666. The island became the property of Monseigneur de LAVAL, first bishop of Québec, in 1668 (it had 471 inhabitants, as many as Québec). It was ceded as a fiefdom to François Berthelot in 1675, under the name of Île de Saint-Laurent. The parishes of Saint-Pierre, Saint-François and Saint-Jean were founded in 1679. Saint-Paul parish became Saint-Laurent parish in 1698, and a precise map of the island was made in 1689 by Robert de Villeneuve.

By 1725, again under the name of Île d'Orléans, prosperity had returned. In 1759 it was used as a base for British operations against Québec City and was ransacked by the troops of James WOLFE and Guy CARLETON. In 1824 and 1825 a short-lived naval yard at the upstream end of the island built the ships Columbus and Baron Renfrew. A seaport developed at this site and became the Sainte-Pétronille parish in 1870.

Ile d'Orléans has been immortalized in a Félix LECLERC song, "Le Tour de l'Île," which describes the panoramic road around the island. Agriculture still thrives, and the island's beauty, historical buildings, handicraft and horticultural products draw many tourists.