Igloo (iglu in Inuktitut, meaning “house”), is a winter dwelling made of snow. Historically, Inuit across the Arctic lived in igloos before the introduction of modern, European-style homes. While igloos are no longer the common type of housing used by the Inuit, they remain culturally significant in Arctic communities. Igloos also retain practical value: some hunters and those seeking emergency shelter still use them. (See also Architectural History of Indigenous Peoples in Canada.)

Igloo (iglu in Inuktitut, meaning “house”), is a winter dwelling made of snow. Historically, Inuit across the Arctic lived in igloos before the introduction of modern, European-style homes. While igloos are no longer the common type of housing used by the Inuit, they remain culturally significant in Arctic communities. Igloos also retain practical value: some hunters and those seeking emergency shelter still use them. (See also Architectural History of Indigenous Peoples in Canada.) 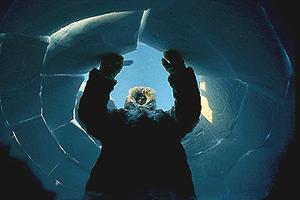 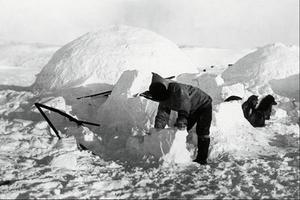 An igloo is a dome-shaped dwelling made of hard snow known as pukaangajuq. Historically, it was used by Inuit families and traveling hunters during the winter season. (In warmer weather, travelling Inuit used tents known as tupiq.)

Commonly, igloos were about 3 to 3.5 m high and 3.5 to 4.5 m in diameter. They often housed a family. Larger igloos could accommodate up to about 20 people. Hunters sometimes made smaller igloos — perhaps about 1.5 m high and 2 m in diameter — to shelter them through the night or during a storm.

Inuit communities had different igloo designs. Some lined the inside of the igloo with animal skins, while others did not. Entrance ways might be flat-topped (as among the Inuinnait), rather than vaulted or domed. Igloos were sometimes arranged in clusters, with a number of living chambers sharing a common entry tunnel or a communal facility, such as a feasting room or a dance house. Some clusters, as among the Iglulingmuit of  Hudson Bay, might have had as many as 10 domed units, each with a different function; for example, a living unit, dog kennel or storage.

Today, Inuit live in permanent houses. While some hunters generally pitch tents when they are out on the land, others still find the igloo a practical shelter.

DID YOU KNOW?
One of the largest igloos ever built in Canada was at Puvirnituq’s 2005 Snow Festival. Participants built an enormous igloo together, measuring 5 m tall and close to 40 m around. It took about a week to build and accommodated more than 400 people.


How are Igloos Made?

Once a solid, flat location with pukaangajuq (referring to snowhouse snow) has been chosen, igloo builders use knives made out of whale bone or metal and other tools to cut out large blocks of snow. These blocks form the inward-leaning walls of the igloo. Builders construct the igloo around this space, in a spiral fashion and from within the soon-to-be snow house.

Narrow passageways, sometimes dug just below ground level, provide entry to the igloo. Snow blocks are used to cover the entrance way, functioning as doors. Windows can be built into the igloo using lake ice or a clear piece of gut skin from a seal. Builders leave a hole at the entrance and at the top of the igloo so that heat can escape.

After construction is complete, the builders fill in any gaps with snow to keep it warm on the inside. The warmth in the igloo, coupled with the cold Arctic air outside, serves to further strengthen the igloo’s structure as any thawing sections are frozen.

DID YOU KNOW?
This is how igloos stay warm: the hard snow walls of the igloo are good insulators that keep in body heat and the heat generated by oil lamps (known as qulliq.) This is why traditional igloos are made out of snow rather than ice. Solid ice does not retain heat as well as blocks of compressed snow. Additionally, some igloo interiors have tiered floors, so that people can sleep above ground, where it is warmer.

Temperatures inside igloos are often just above freezing, although temperatures can get as high as about 15 degrees Celsius, depending on the number of people inside and if there is a heat source, such as an oil lamp.

In the past, Inuit generally kept on their warm, fur-lined clothes while inside the igloo during the day, including boots, jackets, gloves and hats. At night, they would sleep on or wrapped in heavy furs to stay warm. At the centre of social life in the igloo was oil lamp, around which the Inuit cooked, ate, warmed up and socialized.

Igloos hold cultural importance for the Inuit. Some elders teach young Inuit how to build igloos as a part of a larger lesson about living off the land. Many curricula in the North, and particularly in Nunavut, have incorporated traditional Inuit knowledge into various teachings. In 2008, the Nunavut government passed the Education Act, which allows for qualified Inuit elders to teach skills like igloo-building in schools. Various places in the North, such as Iqaluit and Arviat, also hold igloo-building competitions at different times of the year. In these ways, the igloo is not a relic of the past, but an object of cultural value in the present.