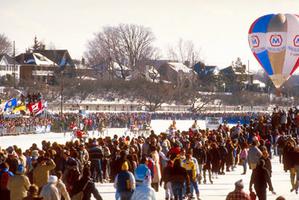 In winter the National Capital Commission maintains the longest skating rink in the world, along the Rideau Canal. The Chateau Laurier is in the background (Corel Professional Photos).

Ice skating probably originated in Scandinavia over 2000 years ago as a means of transportation. It was also practised on the canals of Holland during the Middle Ages. Early references to skating in England date from the 17th century. The first skates were made from the shank or rib bones of elk, caribou and other animals, and the word "skate" likely derives from the early German word schake, meaning shank. As a social and recreational pastime, skating was popular in Britain and France during the 18th century, and the world's first skating club was formed in Edinburgh in 1742.

In Canada, according to legends, the Iroquois used to skate, tying animal shinbones to their footwear with leather thongs; and in Acadia, French explorers were skating as early as 1604. Skating as a sport was introduced into Canada by British garrison officers in the 1840s, and quickly gained a strong following. It was thought especially appropriate for girls and women, and thus became an important social pastime.

Canada led the world in the development of early skating rinks, and the first prepared outdoor commercial rink in the country was opened in Montréal in 1850. The first covered rink in the world was built in Québec City in 1852. The early rinks were built with natural ice; large sheds provided the skater with shelter from the wind and snow. The most famous of these early rinks was the Victoria Skating Rink in Montréal, built in 1862 and at that time the largest in the world. From this rink the game of ice hockey took its standard rink size. The first artificial rinks in Canada were built in Victoria and Vancouver, BC, during the winter of 1911-12, and artificial rinks are now found in most sizable communities. However, Canadians still skate for pleasure on frozen lakes, ponds and rivers. Ice skating is fundamental to the game of ice hockey and competitively takes the form of figure skating, speed skating and ice dancing.

The evolution of the skate to the modern steel blade or tube variety passed through several stages. Skates made entirely of iron were introduced in the 17th century. Steel skates, fastened with screws and clamps to the wearer's shoes, were first made in the 1850s. In 1861, John Forbes of Dartmouth, NS, developed the first spring-skate; adjusted with a single lever, it eliminated the need for screws and plates. Eventually, this style was replaced by the skate with a blade permanently attached to the boot. The 1990s saw the introduction of the clap skate, with the blade spring-hinged at the toe; this innovative design allowed the blade of the speed skater to remain in contact with the ice slightly longer, and resulted in significantly faster times.