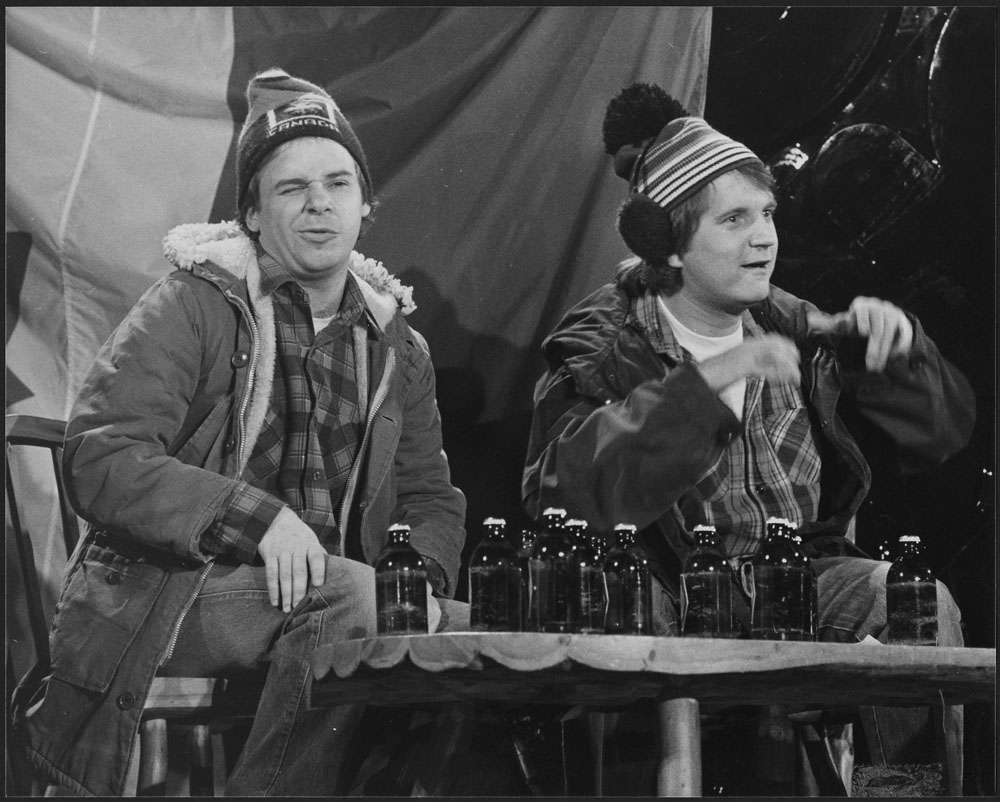 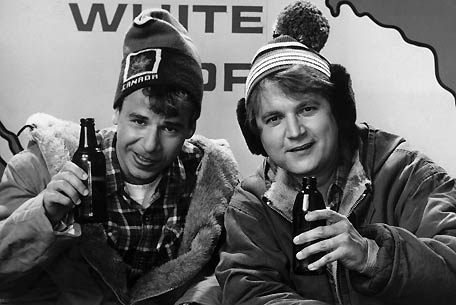 Bob and Doug McKenzie in a promotional still for the movie Strange Brew. The duo is played by actors Rick Moranis and Dave Thomas.  Photo courtesy of MGM.

“Hoser mania is reaching epidemic proportions,” remarked broadcaster Leslie MacKinnon on CBC-TV’s The Journal in the early 1980s. The craze was provoked by fictional brothers Bob and Doug McKenzie, recurring characters on the comedy show SCTV. The program was initially aired in Canada, then migrated to NBC in the United States in 1981. The comic actors Rick Moranis (Bob) and Dave Thomas (Doug) may not have been the first to use the word “hoser,” but they are responsible for making it a well-known expression.


In 1980, after SCTV had left Global Television Network and become part of CBC’s schedule, network executives asked the show’s producers to come up with two extra minutes of “identifiable Canadian content.” Moranis and Thomas invented “The Great White North,” an improvised weekly sketch in which Bob and Doug would each embody the stereotype of an uneducated Canadian: beer-swilling, bacon-loving, doughnut-munching and frequently inarticulate. The brothers’ lack of pretense, zest for life and rough affection for each other made them lovable to viewers despite their obvious limitations.

Originally conceived as filler material, the sketch quickly became the most popular element of the show. The two characters wore parkas, plaid shirts and tuques with earmuffs. They were hosers. Much of the humour in the skits comes from their failure to understand anything outside their little world, and many things inside it too. “If there was a definition of the lowest common denominator, I think that’s it,” Thomas told MacKinnon. From time to time, Bob and Doug would use the related term “hosehead” to insult each other. For example, during one episode, Bob asked a stupid question about a type of beer and Doug replied, “‘Cause it says so on the label, hosehead.”


Where Did the Word “Hoser” Come From?

It’s unclear if the word “hoser” was in use before “The Great White North.” Various claims to this effect have emerged in the years since. An article published in the Globe and Mail in 1982 stated that the term “arose shortly after cars and gasoline-powered tractors came into use on the Prairies.” Out on the farm, a person who siphoned gas from a neighbour’s fuel drum using a length of rubber hose would supposedly be known as a hoser. But in 2010, a writer for the Vancouver Sun declared with equal confidence that, “[t]he term originates from pre-Zamboni days, when the losing team would have to hose down the ice after a hockey game.” These suggestions appear to qualify as “folk etymology,” as there is no proof that either one is correct.

The earliest recorded use of the term “hoser” appears to be in a 1981 Toronto Star interview with Rick Moranis, who defined the word at the time as “what you call your brother when your folks won’t let you swear.” The closeness of “hoser” to “loser” may provide a clue to the word’s true origin. So may the fact that in the Canadian Oxford Dictionary (second edition, 2004), the meanings of “hose,” used as a verb, include “deceive, swindle.” On “The Great White North,” Moranis and Thomas occasionally used “hose” with exactly this meaning. Still, the Collins Canadian Dictionary (2010) makes a distinction between the American meaning of “hoser” (“a person who swindles or deceives others”) and the Canadian (“an unsophisticated, especially rural, person”). The Oxford English Dictionary, meanwhile, notes that as early as the 1920s, “hose” was American slang for a penis, as in the immortal rhyme: “So now kind friends remember before the water flows / Please adjust the distance according to your hose.” This, too, may be a factor in the word’s beginnings.

Hosers are nearly always white men. A hoser is, to a great extent, the Canadian equivalent of American terms like “hillbilly” and “redneck” – though without the overtly racist connotations of the latter word. A parody of the Canadian public service announcement “Hinterland Who’s Who” states that, “The hoser is often found in clusters, in habitats such as the Tim Hortons parking lot, Harvey’s and hockey arenas. Feeding mainly on a diet of smokes, coffee, poutine and beer, the hoser is a colourful animal — and a slob.”


Another video, “How to Know if You Are a Canadian Hoser,” gives its viewers advice along the lines of “Embrace your stereotypes” and “Be a kid. A hoser likes to have fun.” The advice, however, is predicated on a stark fact: “You’re an idiot.” And indeed, in one episode of “The Great White North,” Doug announces that his brother flunked out of grade six.

Laughing at Bob and Doug McKenzie — and emulating their attire and their eh-saying speech patterns — allowed Canadians to celebrate themselves in an ironic yet good-natured way. Had comedians from the United States or any other nation been the ones to come up with the image of a Canadian hoser, the reaction in this country would probably have been very different. “Hoser” is a stereotype, but Canadians invented it and other Canadians have embraced it. For example, many of the male characters in the popular TV series Trailer Park Boys (which aired for 12 seasons, beginning in 2001) could be identified as hosers. The same is true with the more recent Canadian comedy series Letterkenny. By 2010, when Fitzhenry and Whiteside published an updated edition of its Canadian Thesaurus, “hoser” was listed not only as an equivalent of “blockhead, dolt, dope, lout, moron,” but also as a non-formal synonym for a Canadian.

Has the term “hoser” outlived its welcome? The hoser was always an exaggerated symbol of an average white, male Canadian. Given the changes that have occurred in both society and politics in the decades since, the symbol has become arguably problematic. In the 21st century, Canada is a much more urban, diverse and many-cultured country than it was in the early 1980s (see Population of Canada). Hosers are a distorted reflection of an older Canada.

The idea that hosers could stand for all Canadians now brings with it an element of discomfort. “This is a hoser country,” charged the Globe and Mail’s television critic, John Doyle, in a 2013 article titled “Rob Ford and the triumph of the new hosers.” “We admire hosers, we have sympathy for them and, sometimes, we just let them run things.” Doyle suggested that Rob Ford, then the mayor of Toronto, was “a total hoser” who “talks hoser and acts the hoser lifestyle.” Similar opinions were expressed in publications such as the Los Angeles Times, the Guardian, Salon and Maisonneuve. The image of the hoser once seemed to unite Canadians in laughter; today it may be dividing them in annoyance.