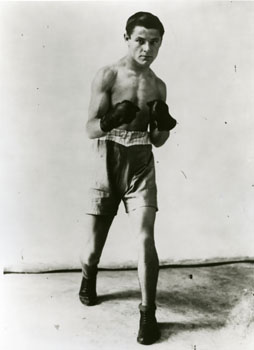 Boxer Lefty Gwynne. At the 1932 Olympics in Los Angeles Canadian boxer Horace "Lefty" Gwynne won the Olympic gold medal match against German Hans Ziglarski knocking him down in the second round. Immediately after the Olympics he turned professional.

The son of a bricklayer, Gwynne left school after Grade 8, weighing 65 lb (29.5 kg). When he started going through a growth spurt, he began working out in Stokley’s Gym in Toronto to lose weight in order to become a jockey (see Thoroughbred Racing).

At age 19, he won the Canadian amateur flyweight championship in London, Ontario. He entered the 1932 Olympic trials as a bantamweight, a class permitting up to 118 lb (53.5 kg); he weighed 117 at a height of 5’1.5” (156 cm). Despite having fought only 15 bouts, he won the Canadian amateur bantamweight title, which sent him to the 1932 Olympic Summer Games in Los Angeles.

Gwynne beat Vito Melis of Italy and Jose Villeneuve of the Philippines before facing Hans Ziglarski of Germany in the gold medal match. The smart, tactical and hard-hitting Gwynne knocked Ziglarski down in the second round and easily defeated him on points. “I can't remember a darned thing about the final bout,” Gwynne told the Toronto Star in 1984, “except we never knew who our opponent was until we got in the ring. So we couldn’t plan things the way they do now. And the referee was outside the ropes, shouting instructions at is [sic].” In the words of Toronto Star sportswriter Lou Marsh, Gwynne “had the German boy completely at sea and looking for a lifebuoy when the final gong rang.”

Gwynne turned professional immediately after the Olympics, agreeing to a five-fight, $1,000 contract with Conn Smythe to fight at Maple Leaf Gardens. He won the Canadian professional bantamweight title in 1938 and held it until 1939. He retired that year with a career record of 39–8–2 with six knockouts.

Gwynne returned to horse racing as a jockey agent and then ran several community centres. He worked his way up to the position of recreation supervisor for the City of Toronto before retiring in 1973. He was part of the inaugural class of inductees into Canada’s Sports Hall of Fame in 1955.