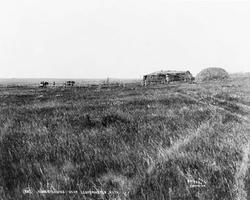 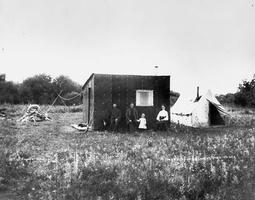 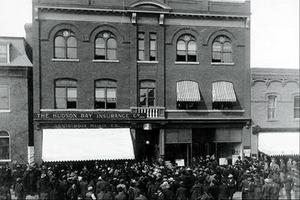 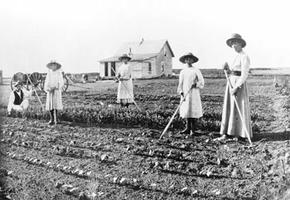 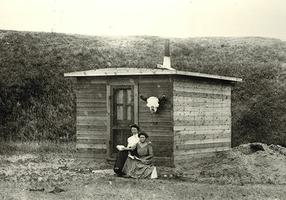 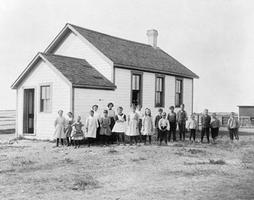 Homesteading, a late 19th- and early 20th-century phenomenon in which immigrants were attracted to the Canadian West by government advertisements of "free" land. Under the DOMINION LANDS POLICY, 160 acres cost only $10, but the homesteader had to build a house, often of log or sod, and cultivate a specified area within 3 years. A new homesteader required basic agricultural implements, and since horses were expensive, most used oxen to clear and break the land. A fireguard to protect farm buildings had to be ploughed, and a vegetable garden planted and game hunted to supplement the food supply. If the water was of poor quality, homesteaders had to collect rainwater or melt snow. In many areas a homestead had to be within 15 km of a railway to be farmed economically; the reservation of land for the Hudson's Bay Co or railways within this belt was a source of frustration, for the poor or latecomers were forced to settle away from markets and towns. The railroads did provide employment for homesteaders until their farms began producing.

Homesteaders and their families were often separated from friends and relatives, and many suffered years of hardship and loneliness. One of the greatest difficulties was the absence of roads and bridges. Most trails were impassable when wet. In the autumn homesteaders waited until the ground was frozen before transporting their produce to the railhead. Farm accidents often resulted in permanent injury or, because doctors were rare, death. Drought ruined those who settled in the arid Palliser Triangle. For many the price of homesteading was too high; they cancelled their claims and moved away. Adversities, however, bound homesteaders together. Prejudices were lessened as people helped one another. Building and quilting bees were common (seeQUILTS). Doors were kept unlatched and lanterns hung at night to guide travellers. At first, recreation was confined to the lonely homestead, but as communities grew there were sport days and a variety of entertainment at the community halls. Homesteading on the Prairies declined after WWI as IMMIGRATION fell off and movement toward the cities increased.