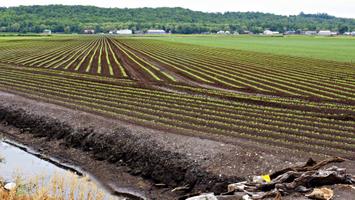 Holland Marsh, 2900 ha of organic (muck) soil, is located near Bradford West Gwillimbury, Ontario, 50 km north of Toronto. Draining to the northeast by the Holland River (which empties into Cook's Bay, an arm of Lake Simcoe), the marsh is a flat, level area lying in a shallow basin (oriented in a northeast-southwest direction) that was an arm of glacial Lake Algonquin. As the lake level dropped and the land rebounded when the glaciers receded, a marsh was formed containing sedges, bullrushes, various marsh grasses and some trees. Dead vegetation accumulated at about 30 cm per 500 years, forming a layer of organic material overlying a clay pan in the basin. In this natural state the marsh and river were home to many species of fish, small animals and birds.

The first human use of the marsh was by local Indigenous people (latterly the Huron) as a source of food. Early European settlers (about 1825) also fished and hunted here. Around 1900 the Bradford Mattress Factory used marsh grasses as stuffing for mattresses. The marsh takes its name from the Holland River, which was named after the surveyor Samuel Holland.

In 1904 Dave Watson, a Bradford grocer, persuaded William H. Day, professor of physics at the Ontario Agricultural College, Guelph, to investigate the possibility of draining the marsh. Day tested the soil and experimented successfully in growing vegetables. In 1925 drainage operations began and a canal and dikes 28 km long and 2 m deep were constructed around the marsh to divert the Holland River. Pumps were installed to control the water table within the dikes. The project was completed in 1930. In 1931 and 1934, 18 Dutch families came to the marsh and formed the nucleus of an expanding and prosperous agricultural community. After World War II, more immigrants from Holland, as well as from other European countries and Asia, settled here. The marsh today is a market garden for the Ontario and foreign markets, producing carrots and onions in particular, as well as lettuce, potatoes, celery, parsnips, cabbage, cauliflower and beets. There are some greenhouses in which tomatoes, cucumbers and commercial flowers are produced. 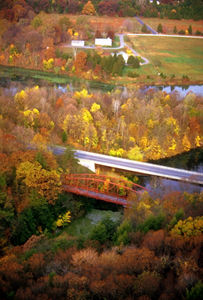