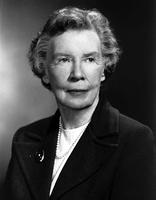 Hilda Marion Neatby, educator (b at Sutton, Eng 19 Feb 1904; d at Saskatoon 14 May 1975), sister of Kenneth NEATBY. Best known as author of So Little for the Mind (1953), a critique of Canadian education, Neatby was also an influential member of the Massey Commission (seeNATIONAL DEVELOPMENT IN THE ARTS, LETTERS AND SCIENCES, ROYAL COMMISSION ON), a historian of Québec and a professor at University of Saskatchewan. In her 1953 study, Neatby called for a return to basics in primary education and an emphasis on traditional education for the best students in high school. She presented her ideas forcefully. These were strongly criticized by educational bureaucrats and widely debated throughout Canada. She published Quebec, The Revolutionary Age, 1760-1791 (1966). The following year she became a Companion of the Order of Canada.
×