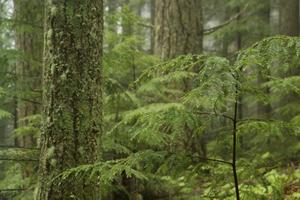 The Hemlock is an evergreen conifer, genus Tsuga, of the pine family (Pinaceae). Early settlers named the hemlock after a European flowering weed (Conium maculatum) because the odour was similar when needles were crushed. Ten species are recognized: 6 in eastern Asia, Japan and Taiwan, and 4 in North America. Of the latter, 3 occur in Canada: eastern hemlock (T. canadensis), in southern Ontario, Québec and the Maritimes; western hemlock (T. heterophylla) and mountain hemlock (T. mertensiana), on the West Coast from Alaska to northern California.

Hemlocks are tall, stately trees with slender, usually drooping, leader and branches. Leaves are needlelike but blunt. Cones are nonwoody and small, about 2 cm long (up to 7 cm in mountain hemlock). Pollination occurs in spring and winged seeds are shed in late summer or fall. The root system is shallow and wide-spreading. Hemlock wood is fairly hard, and these trees are harvested extensively for pulp, paper and lumber.