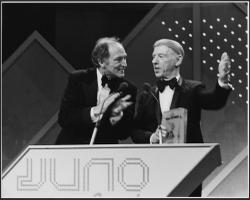 Clarence Eugene Snow, "Hank," singer, songwriter, guitarist (b at Brooklyn, NS 9 May 1914; d at Nashville, Tenn 20 Dec 1999), one of the fathers of Canadian COUNTRY AND WESTERN MUSIC. His singing style, with its clear enunciation, influenced scores of artists in Canada and the US.

Snow ran away to sea as a youth and was soon entertaining crew members with his singing. By 1929 he was singing professionally, and by 1935 he had a radio show in Halifax. In 1936 Snow signed with RCA Victor and recorded his first hits. He tried to break into the US market in the late 1940s, with slight success. But in 1950 RCA released "I'm Movin' On," the song that established his career in the US, and Snow became one of the top stars of country music in the 1950s. He eventually moved to Nashville and became an American citizen, though he still appeared in Canada regularly. He was selected for the Country Music Hall of Fame in 1976 and the Canadian Music Hall of Fame in 1979. Snow was inducted into the Canadian Country Music Association Hall of Honour in 1985 and Canadian Country Music Hall of Fame in 1989. In 1985 "I'm Movin' On" won the Millionaire Award for having been played on the radio 1 million times, an all-time country music record.

Snow received an honorary degree from St Mary's University in 1994. In 1995 Liverpool, NS, held an 81st birthday party to raise money for the Hank Snow Country Music Centre, which opened in 1997.