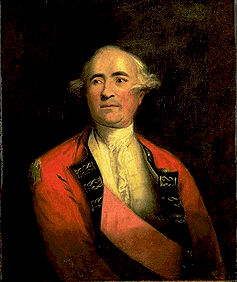 After the American Revolution (1775–83), the Haudenosaunee lost much of their ancestral homeland in upper New York, an area now formally recognized as American territory. Mohawk leader (Joseph Brant), and some representatives of the Six Nations Confederacy, reminded the British government of the Haudenosaunee’s loyalty during the American Revolution, and pressured the Crown to provide them with a land grant in Canada to replace the territory that they had lost as a result of the war. Thayendanegea selected the valley of the Grand River in present-day southwestern Ontario as a place of settlement; in 1784, the governor of the province of Quebec, Frederick Haldimand, agreed to Thayendanegea’s request and made arrangements for the land grant.

On 22 May 1784, Haldimand signed an accord with Mississauga chiefs to cede approximately 385,000 hectares (ha) of land to the Crown for £1,180. The largest portion of this went to the Haudenosaunee, who received a tract of land 10 km deep on either side of the Grand River, beginning at its source to Lake Erie. This area provided the basis of the Six Nations reserve.

These disputes over land title can be seen as part of a larger debate about Haudenosaunee sovereignty. Thayendanegea wanted the Six Nations to be recognized as autonomous Crown allies rather than British subjects. As an independent nation, they would be able to sell their land to whomever they wanted. The British, however, did not see the Six Nations as political entities, but rather as a group that was to receive special consideration, but was still under Crown control.

In 1791, the dispute surrounding the Haldimand Tract was further complicated. In this year, the Canadian government created the province of Upper Canada, adding another bureaucratic layer of government with which the Six Nations would have to negotiate in order to gain the land title they sought. (See also Upper Canada Land Surrenders.)

Upon review of the Haldimand Proclamation, politician and Indian Department official Sir John Johnson noted an error involving the location of the northern boundary of the tract. Haldimand had mistakenly assumed that the headwaters of the Grand River resided within the territory ceded by the Mississauga in 1784. However, this was inaccurate, as it in fact lay outside of the land that the Crown had purchased from the Mississauga.

In order to clarify the boundaries of the tract, the Crown appointed surveyor Augustus Jones to complete a survey of the Haldimand Tract in 1791. In so doing, Jones redefined the borders of the Six Nations’ land parcel, limiting the Haldimand Tract along its northern borders by what is known today as the Jones’ Base Line. In addition, Jones established straight-lined boundaries, rather than sinuous boundaries following every curve in the river, which can still be seen in today’s municipal boundaries.

Thayendanegea and others expected that once the Crown purchased the remaining territory from the Mississauga — which they did in December 1792 — the remaining section to the headwaters of the Grand River would be given to the Six Nations. However, the Crown maintained that the Haldimand Proclamation could only include what could be legally transferred at the time, not what was intended to be transferred. Consequently, the Crown did not transfer these lands as per Haldimand’s original intent.

Frustrated by the reduction in territory, Thayendanegea petitioned John Graves Simcoe, the first lieutenant governor of Upper Canada, in 1792 for control over the Haldimand Tract. Once Simcoe understood the confusion surrounding the errors and the vagueness of the Haldimand Proclamation, he decided to clarify the situation and achieve some form of compromise between the Crown and Six Nations.

Issued in 1793, the Simcoe Patent confirmed the new boundaries as marked by Jones; it limited the Haldimand Tract to 111,000 ha for the exclusive use of the Six Nations. This left the rest of the land available to be leased, surrendered or sold by the Haudenosaunee to the Crown. The patent also stipulated that all land transactions of the Six Nations had to be approved by the Crown. However, a clause in the document ensured that the Six Nations could sell portions of the territory to the government whenever it became absolutely necessary.

Much to the dismay of the Six Nations, the Simcoe Patent did not address the issue of land title to the territories by the headwaters of the Grand River. This remains a source of dispute between the Haudenosaunee and Ontario government.

To Thayendanegea, this patent only reinforced the Crown’s trusteeship interpretation of the title. He and the Grand River chiefs rejected Simcoe’s Patent and claimed that it was not binding on them.

By 1796, the Six Nations began selling and leasing land to settlers, despite the Crown’s initial objections. Thayendanegea reached a compromise agreement with Simcoe’s successor, Peter Russell, whereby the Haudenosaunee could sell and lease the land, so long as they offered it to the Crown first. Thayendanegea sold approximately 350,000 acres of land to the Crown, who then distributed it to private owners, according to arrangements made by Thayendanegea. On 5 February 1798, this land was parcelled out in six large blocks to specific purchasers. These later developed into towns that still exist today:

As settlers began to settle further up the Grand River, in an area known as “Brant’s Ford,” they named their village Brantford, after Thayendanegea (Joseph Brant). It was incorporated as a city in 1877. 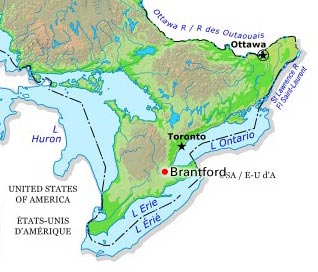 While Thayendanegea received the authority to sell and lease, it came with a heavy cost for the Six Nations, who lost the majority of the territory in the process; by 1828, nearly two-thirds of the Grand River territory was sold, leased or occupied by squatters.

By 1847, the Six Nations occupied the land that is home to the current Grand River community; this land accounts for approximately 4.8 per cent of the original Haldimand Tract. Three years later, the Crown passed a proclamation, setting the extent of reserve lands to about 19,000 ha, which was agreed to by the Six Nations chiefs.

Disputes over the rights to the Haldimand Tract continued into the 20th and 21st centuries. In 1974, the Six Nations created the Six Nations Land Claims Research Office (SNLCRO) to pursue the terms laid out in the Haldimand Proclamation of 1784. Since then, the SNLCRO has submitted 29 separate claims to the Specific Claims Branch of the federal government.

Of the 29 claims, one was settled in 1987: the Canadian National Railway settlement. On 4 November 1980, the Six Nations Council filed a claim with INAC regarding the railway’s unauthorized use of reserve land that ran along the eastern limit of the reserve. After negotiations, the Six Nations Band Council agreed to accept a settlement of $610,000, to be awarded in the form of three parcels of land as an addition to their reserve. In 1987, an Order-in-Council added approximately 104,883 ha to the Six Nations reserve. The Council also retained the right to purchase said railway lands if they were not used for railway purposes and were re-acquired by Canada.

As of January 1995, all of the other 28 claim files were closed, though not fully rejected, by the federal government. The Six Nations Confederacy continues to defend these claims.

The Douglas Creek Estates Dispute brought renewed urgency to the unresolved land claims associated with the Haldimand Proclamation. The dispute began in early 2006 over disagreements about property rights in Caledonia, Ontario. The Six Nations of the Grand River sought to reclaim and halt the development of the Douglas Creek Estates subdivision in Caledonia, which was to be built on land known to some Haudenosaunee as Kanonhstaton, “the Protected Place.” The area was included in one of the original 29 land claims filed — Hamilton–Port Dover Plank Road, Seneca and Oneida Townships. Protestors began a blockade of the area on 28 February 2006. It quickly attracted national attention and caused tension between the residents of the town and the Haudenosaunee.

According to the province of Ontario, the legal owner of the land was Henco Industries Limited. Henco was therefore successful in obtaining a court injunction prohibiting the Haudenousaunee’s encampment in the subdivision. Early in the morning of 20 April 2006, Ontario Provincial Police raided the camp, leading to several violent arrests. However, many protestors remained on site and continued their occupation of the land; they also blocked the main road and highway bypass through Caledonia. Two months later, the Ontario government paid Henco Industries for the property, ended the court injunction and stopped development. However, the ownership of the land remained in dispute.

In 2013, the dispute resurfaced after negotiations with the government seemed to be put on hold. Protests and blockades spread south from Caledonia to Hagersville and west of Brantford. In November 2014, members of the Haudenosaunee Confederacy Chiefs Council (HCCC) completed construction of a fence and gate surrounding the Douglas Creek Estates. An HCCC spokesperson said the blockade was erected for safety and security reasons, to prevent trespassing on the disputed piece of land. The Haudenosaunee continue to seek resolution through negotiation, and to demand formal accounting of land leases and sales from the government.

Since 2007, the Ontario government has spent more than $1.6 million in connection with the Douglas Creek Estates dispute. Most of that money has gone to the county of Haldimand, in lieu of property taxes that cannot be collected on the subdivision. The failed housing development was purchased by the provincial government.

In the summer of 2020, tensions heightened again as Six Nations people protested the McKenzie Meadows housing development they argue is on unceded land. After the OPP arrested some of the protesters, Six Nations members set fires to train tracks and construction vehicles, and constructed barricades. While the main blockade was removed by late August, arrests and court injunctions continued into the fall.

The McKenzie Meadows dispute is also referred to as 1492 Land Back Lane. 1492 references the year explorer Christopher Columbus travelled across the Atlantic Ocean from Spain to the Americas. It also refers to the subsequent colonization of Indigenous peoples by European powers in those territories.

1492 Land Back Lane is part of a long-standing issue between the Haudenosaunee, settlers and the government over land rights in Caledonia, dating back to the Haldimand Proclamation.

For hundreds of years, the Haldimand Proclamation has been a source of dispute between the Crown and the Haudenosaunee. The resulting Caledonia dispute is one of the longest and most violent land-claim disputes in Ontario history. Though the primary issue of contention is about land claims and land title, the underpinning issue is about Indigenous rights and sovereignty. These issues are contentious and complex, and are not easily resolved, as they involve multiple parties, including the Haudenosaunee, provincial and federal governments, and current residents of the disputed territories.