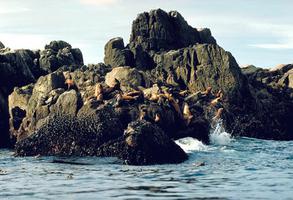 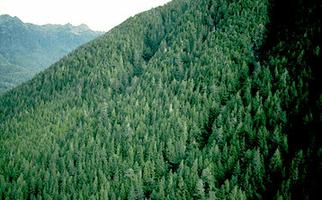 The Haida Gwaii is a group of islands off the north coast of British Columbia. The name means "Islands of the People" in the language of the Haida, who claim the archipelago as their ancestral lands. Captain George Dixon named this group of islands the Queen Charlotte Islands in 1787 after one of his ships, which in turn was named for the wife of King George III, and this was its official name until 2010 when Haida Gwaii was accepted.

The Haida Gwaii include about 150 islands in a scimitar-shaped archipelago 250 km long. Graham and Moresby Islands comprise the bulk of the 10 000 km2 area. Separated by 48-140 km of open water (Hecate Strait) from the mainland islands, the Haida Gwaii are among the most isolated islands in Canada. Also unique is the absence of a continental shelf off the steep western ramparts of Moresby Island.

History
Archaeological evidence indicates human occupation of the Haida Gwaii for at least 6000 to 8000 years. Juan Pérez was the first European to sight the islands (1774). They were visited by James Cook in 1778. At that time the Haida nation populated the islands and probably numbered 6000 to 8000. European diseases drastically lowered the Haida population to about 588 individuals in 1915, the most dramatic drop for any tribe recorded in the province. The present population of all peoples on Haida Gwaii is about 5000.

Until recently, most people were loggers, fishermen or miners in the villages of Masset, Port Clements (incorporated 1982), and Queen Charlotte (incorporated 2005), and the communities of Old Massett, Skidegate, Sandspit and Tlell. Today geologists, biologists and recreationists come to study and enjoy the rugged mountain scenery (peaks up to 1200 m) along the western backbone of the islands, spectacular fjords, seabird and sea lion colonies, dark giant Sitka spruce and cedar forests, and remnants of decaying Haida totem poles.

Natural and Cultural Treasures
The Haida Gwaii were formed by the movement of huge plates under the Pacific Ocean from the region of the South Pacific to their present location (see Plate Tectonics). Unlike most of Canada during the last Ice Age, parts of the Haida Gwaii escaped glaciation. This, coupled with the islands' isolation, has resulted in these islands becoming a biologically unique area in Canada. There are numerous plants here that are found either only on the Haida Gwaii or in distant lands such as Japan.

All the native land mammals and 3 kinds of birds are subspecifically unique, with the black bear being the largest in North America. Unfortunately, introduced species have been taking their toll on many native plants and animals. Several species of seabirds are now at risk because of the threats posed by introduced predators (rats, squirrels and raccoons).

The old Haida village of Ninstints (SGang Gwaay llnagaay), on Anthony Island (SGang Gwaay), has been made a United Nations World Heritage Site. Conservation measures to slow the natural degradation of its spectacular totem poles hope to extend their existence as part of a collection of world treasures.

The cultural and natural features of the Haida Gwaii draw tourists. Naikoon Provincial Park, with its vast beaches and bogs, attracts hikers. The South Moresby area, with its outstanding totem poles, marine life, hot springs, forests and mountain scenery, is unrivalled in Canada as a place to explore by water. In 1993 this area was protected by the creation of Gwaii Haanas National Park Reserve and in 2010, the adjacent marine waters received protection with the establishment of the Gwaii Haanas National Marine Conservation Area Reserve.

How did an ice age determine what animals and insects are only now found on the land we now call Canada? Leah and Falen go way, way back to find the answers. See also: "Ours To Save," a special report from the Nature Conservancy of Canada and NatureServe Canada. Link: https://bit.ly/33dpT6H
Note: The Secret Life of Canada is hosted and written by Falen Johnson and Leah Simone Bowen and is a CBC original podcast independent of The Canadian Encyclopedia.