For several years prior to the standoff, predominantly Secwepemc people from the region participating in a religious ceremony known as the Sun Dance gathered each July at Gustafsen Lake (known as Ts’Peten to the Secwepemc people) on pasture land controlled by American rancher Lyle James. James lived in the area near some reserves and hired Indigenous people to work on his property. The relationship between James and the Secwepemc Sun Dancers therefore began amicably enough. James agreed to allow the Sun Dancers yearly access to the pasture land for the 10-day ceremony provided they did not erect any permanent structures. (See also Religion and Spirituality of Indigenous Peoples in Canada.) 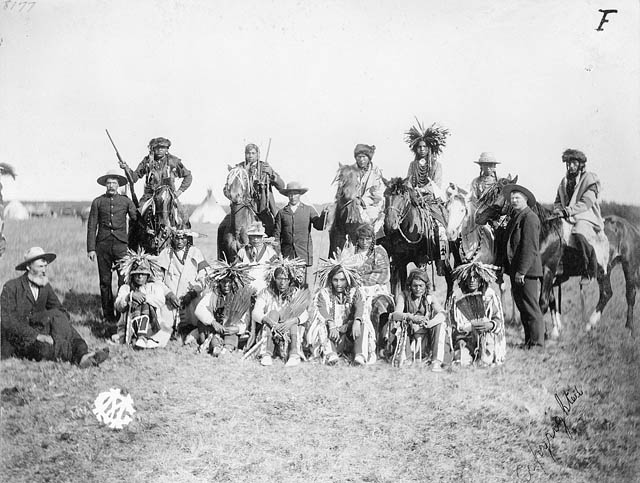 During preparations for the Sun Dance in the summer of 1995, however, this relationship frayed. The Sun Dancers, led by elder Percy Rosette, erected a small structure and a fence to keep James’s cattle out of the sacred site. This angered James and prompted him to deliver an eviction notice in mid-June, demanding the camp of about 20 people leave before the month-long Sun Dance cycle was complete. There were also allegations some of James’s ranch hands harassed the Sun Dancers using racist language, and fired warning shots at the campers.

The Sun Dance ceremonies themselves were held in July without incident, but tensions by then were high between James, his ranch hands and the Sun Dancers, who called themselves the “Ts’Peten Defenders.” Some tribal governments associated with the Cariboo Tribal Council (CTC) did not support the Defenders, claiming few of them were locals. During June and July, there were frequent meetings between representatives from the RCMP, CTC, Defenders and James family to try and negotiate peace, but each side saw the other as illegal occupiers. The Sun Dance campers stayed on the land through August, resisting the eviction notice. Skirmishes between armed campers, ranch hands and undercover RCMP officers escalated throughout August, as did national media attention. (See also Indigenous Political Organization and Activism in Canada.)

By this time, what began as a question of access to a campsite for ceremonial purposes took on broader, though somewhat unfocused, significance. The Ts’Peten Defenders argued that the Secwepemc people maintained sovereign rights to land that were never ceded or surrendered by treaty to the Crown and that Indigenous peoples must protect their exclusive jurisdiction to the disputed land. However, police and BC Attorney General Ujjal Dosanjh argued the standoff was little more than a spat over private property rights that involved “undisputed lawlessness” on the part of the First Nations activists. ( See also Aboriginal Title and Indigenous Territory.)

By early September, political rhetoric in the province was on the rise and negotiations to dismantle the camp had proven unsuccessful, including the intervention of Ovide Mercredi, then the national chief of the Assembly of First Nations. The RCMP began putting into place plans to remove the campers by force, bringing in equipment such as helicopters and several armoured personnel carriers from the Canadian military to surround the site.

On 11 September, a truck driven by two Ts’Peten Defenders near the perimeter of the camp hit an explosive planted by the RCMP. The two activists fled on foot, but a firefight between RCMP and the activists ensued, lasting 45 minutes and involving thousands of rounds of ammunition. One non-Indigenous supporter was shot in the arm, but no serious injuries were sustained by the Ts’Peten Defenders or police. The only fatality was a dog owned by a Defender.

By this time, many of the original campers had agreed to leave. On 18 September, the remaining Ts’Peten Defenders surrendered to police, after advice from an Indigenous spiritual advisor.

In the end, the standoff cost an estimated $5.5 million and involved at least 400 RCMP officers.

Following the standoff, police charged 14 First Nations people and four non-Indigenous supporters with a total of 60 offences, including two counts of attempted murder.  A complex trial got underway in the summer of 1996 in Surrey, British Columbia, and lasted a year. Evidence presented at trial sparked accusations the RCMP had engaged in a campaign of deliberate media disinformation, barring journalists from the site to speak with the activists and “smearing” the First Nations leaders.

In the end, a jury set aside the two most serious attempted murder charges but delivered 21 convictions against 15 people involved in the standoff. Jail sentences ranged from six months to eight years. (See also Gustafsen Lake Standoff: 15 Charged.)

Among the leaders of the armed standoff were William (Wolverine) Jones Ignace, a member of the Secwepemc Nation and a land rights activist. He was involved in the firefight on 11 September and was sentenced to eight years in prison after being found guilty of several mischief, firearms and assault charges. He was released on parole after five years and died in 2016.

Though not the first Indigenous protest or blockade, the standoff served as a cautionary example in British Columbia, particularly related to Indigenous opposition to oil and gas pipeline projects.