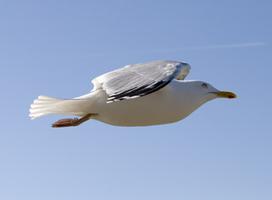 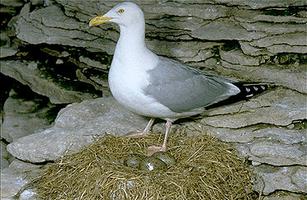 Herring gulls nest on the prairies and on the Great Lakes (Corel Professional Photos).
PreviousNext

All but one species of Larinae have squared-off tails. Most adults are white with grey back and wings, and black wing tips. Most have white heads, but some smaller species have black heads. Nearly all juveniles are brownish, becoming white adults in 2-3 years. They are relatively long-lived (banding records show 20-30 years), breeding from 3 to at least 12 years of age.

Larinae are distributed worldwide; in Canada 23 species of gulls and kittiwakes have been recorded, 18 as breeding. On the West Coast, the glaucous-winged gull (Larus glaucescens) is the common nesting gull. Herring, ring-billed, California and Franklin's gulls (L. argentatus, L. delawarensis, L. californicus, L. pipixcan, respectively) nest on the Prairies. Herring gulls and ring-billed gulls also nest on the Great Lakes. They are joined, in the St Lawrence River and Maritimes, by great black-backed gulls (L. marinus) and by black-legged kittiwakes (Rissa tridactyla).

Most gulls nest on the ground, on islands or peninsulas in wild, rural or urban settings. Franklin's and Ross's gulls nest in marshes; Bonaparte's and less frequently mew gulls nest in trees. In southern Canada, nesting begins mid-late April, progressively later to the north.

Adult gulls swallow their food whole, then fly to the nest to regurgitate it for young. Young gulls fly about 6 weeks after hatching. A pair of adults may raise 1-2 young from 3 eggs. Young gulls die from exposure, toxic chemicals passed into the egg from the female, starvation, or attacks from adult gulls or predators. Deaths often result because young are unskilled at competing for food.