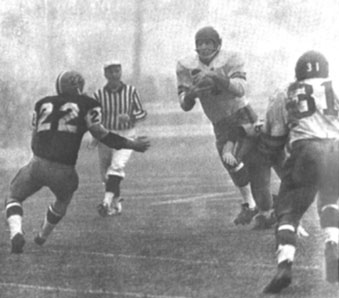 Football was suspended between 1916 and 1918, during the First World War, and in 1919, though there was a season, there was no playoff or Grey Cup game due to a dispute about the rules. Until 1966, the cup was presented to the Canadian champion by various trustees, including, from 1921, the Canadian Rugby Union (CRU). In 1966, the CRU named the Canadian Football League (CFL) trustee. In the early years (1909-24) the university teams were invariably the Grey Cup champions. From 1925 to 1945 the representatives from senior city leagues were supreme, and they continued to contest the cup until the early 1950s, when the professional teams that later comprised the Canadian Football League began to dominate.

In 1948 the Calgary Stampeders and their supporters transformed the Grey Cup game into a week-long carnival of festivities, a national celebration, and the most watched sporting event in Canada. In 1962, hailing the game as an instrument of national unity, Parliament decreed that both major Canadian television networks must make the television transmission of the game available to the other so that all regions could see it. This has been borne out as the game has consistently been the nation's highest-rated television program.

The Grey Cup has been an east-west battle for the Canadian football championship since 1921, when the Edmonton Eskimos (now the Edmonton Elks) journeyed eastward to play the Toronto Argonauts. An attempt was made in 1995 to change the focus to north-south. The CFL expansion into the US in 1993 resulted in a re-alignment in 1995 of a Southern Division of five American teams: San Antonio, Shreveport, Birmingham, Memphis and Baltimore. The Northern or Canadian Division had eight teams: Ottawa, Toronto, Hamilton, Winnipeg, Saskatchewan, Calgary, Edmonton and British Columbia. The object was to build on the successful Grey Cup game of 1994, the first time an American team played in the final. The BC Lions defeated the Baltimore CFLers 26-23. Baltimore, known as the Stallions in 1995, returned to the 1995 Grey Cup final in Regina, where it was being played for the first time, and defeated the Calgary Stampeders 37-20. It was the first time an American-based team had won the Grey Cup. The distinction will probably stand for some time since the Southern Division was disbanded after the 1995 season. Four of the American teams ceased operations while the fifth, Baltimore, transferred its franchise to Montréal, where it was revived as the Montreal Alouettes.

The trophy itself has had a storied past, enduring fire, theft and damage, most recently in 2006 when the BC Lions broke the base during victory celebrations. In 2008 it travelled to Kandahar Air Field in Afghanistan where, on Canada Day, it was passed around by Canadian personnel stationed there.