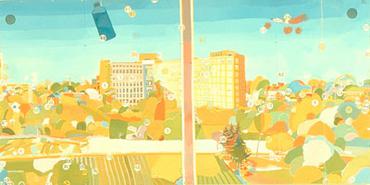 Gregory Richard Curnoe, visual artist (born 19 November 1936 in London, ON; died 14 November 1992 near Strathroy, ON). The most prominent member of the London Regionalism movement and representative of Canada at the 1976 Venice Biennale, Greg Curnoe was among the most innovative and influential artists of his generation.

After completing high school in London, Ontario, Greg Curnoe studied at the Doon School of Art (1956) on the Homer Watson estate in northwestern Ontario, where he was taught by A.Y. Jackson and absorbed the legacy of Homer Watson. In 1957, Curnoe moved to Toronto and enrolled at the Ontario College of Art and Design (now the Ontario College of Art and Design University), where he studied until 1960, before deciding to withdraw from the program just shy of graduating.

After his four years in Toronto, the only time he spent outside his home-town in his life, Curnoe returned to London to start his career as a painter. He began making the representation of his life there, and strategies of local and personal representation, the source of most of his work as both painter and writer. Curnoe’s early work is by turns tormented and playful. Selfchildfool (1959), for instance, is a self-portrait with a monstrous, distorted face.Another well-known piece, Untitled (footless walking woman) (1960), is painted entirely in bright pink and orange Day-Glo paint. While engaging the politics of representing personal subject matter, by the early 1960s, Curnoe had become fascinated with the use of words in art and with collage.

While Curnoe's family, friends and surroundings became subjects of countless paintings, watercolours, collages, drawings and prints, these pieces also became occasions for the artist to explore the way meaning functions in painting through perspective, colour, ornament and narrative. As his career progressed, he became increasingly interested in how words operated in painting, and created a number of text-based works that incorporated large rubber-stamp fonts. Among his last works were a series of rubber-stamp and watercolour "auto-portraits" that reflected on cultural perspectives through depictions of the phrase "It is me" in various European and Native languages. His two encyclopedic writing projects, Deeds/Nations, a biographical directory of the mostly First Nations inhabitants of southwestern Ontario from 1750 to 1850, and Deeds/Abstracts, a history from 8500 BCE to the present of the land on which his studio stood, were published posthumously in 1995.

His most important works include the painting/construction Kamikaze (1967), multi-media series View of Victoria Hospital Second Series (10 February 1969 – 10 March 1971), the 194 drawings illustrating David McFadden's The Great Canadian Sonnet (1970), the watercolour Homage to Van Dongen No. 1 (Sheila) (1979–80), the large watercolours and plexiglas silkscreens of the artist’s racing bicycles, including Mariposa T.T. (1978–79), and the watercolour and rubber stamp Organic Pigments (1987).

Greg Curnoe was killed in a bicycle-truck collision while riding the Mariposa T.T. near Strathroy with his London Centennial Wheelers cycling club.

Greg Curnoe helped found the Nihilist Spasm noise band in 1965, the London Centennial Wheelers cycling club in 1967, and the Forest City artist-run gallery in 1973. Along with Jack Chambers, in 1968 he founded the Canadian Artists’ Representation (now CARFAC), a non-profit organization that advocates on behalf of Canadian artists.