Great Slave Lake is located in the Northwest Territories. It is the second largest lake entirely within Canadian borders, the fifth largest in North America, and the tenth largest in the world. With a maximum depth of 614 m, it is also North America’s deepest lake. Two arms, referred to as the North and East arms, extend from the lake. The name “Slave” derives from “Slavey” — a word sometimes applied to a major group of Dene people indigenous to the region. 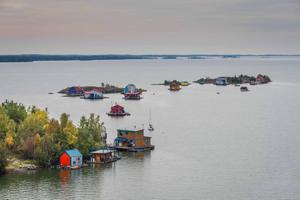 Great Slave Lake formed at the end of the Wisconsinan glaciation, approximately 10,000 years ago. As the glacial ice retreated, sediment filled a former arm of the lake, along the present-day Slave River. The river remains the main source of water draining into the lake, although many smaller rivers and streams also contribute. The principal outflow of the lake is to the west, near Fort Providence (Zhati Koe), into the Mackenzie River.

As with Canada’s other large, northern lakes, Great Slave Lake straddles the boundary between the ancient rocks of the Canadian Shield and the younger Interior Platform (see also Geological Regions). This location influences the character of the lake. The East Arm, which lies in the shield, is distinguished by numerous islands, complex shorelines, and great depths. At 614 m in Christie Bay, Great Slave Lake is deeper than any other glacial lake in North America or Europe. This unique character has influenced proposals to create a national park encompassing the East Arm.

Early fisheries researchers divided Great Slave Lake into three areas based on distinctive fish populations: a central open area, the long North Arm, and the East Arm. The dominant fish species, such as lake whitefish, lake trout, and cisco, are generally found throughout the lake, with some variations. For example, lake whitefish avoid the deepest bays, but thrive in relatively cool, shallow waters. Lake trout and grayling are most abundant in the East and North arms. Shallow, warm, muddy waters on the southern shore and in the tip of the North Arm, near Behchokö, provide rich habitat for goldeye, white suckers, and walleye.

Great Slave Lake lies south of the treeline, within the northern boreal forest, and in the transitional space between woodlands and tundra. Jack pine and spruce are dominant species, with the most thickly wooded areas nearest to the shore. The lake has a moderating influence on the local climate, enabling a longer growing season than in regions farther from its waters. In general, Great Slave Lake begins to freeze over in late November and the ice remains until mid-to-late May. By mid-June the water is open, and mid-summer is the calmest time on the lake. In the fall, stormy weather becomes more common, often blowing in with little warning.

Human occupancy on the shores of Great Slave Lake can be dated back as far as 5,000 BCE. The richest archaeological sites belonged to ancestors of the Dene, known as the Taltheilei people (500 BCE to 1840 CE). These sites are grouped closely together off the eastern shore of the lake. The name of Great Slave Lake refers to “Slavey,” a name that was applied to, and sometimes adopted by, Dene living to the west of Great Slave Lake and down the Mackenzie River to Tulita. 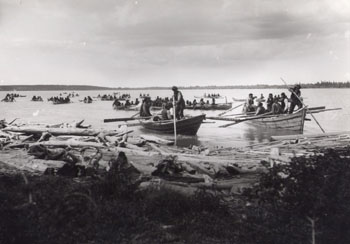 Great Slave Lake is the traditional southeastern boundary of the Tlicho (courtesy Provincial Archives of Alberta/B2211). 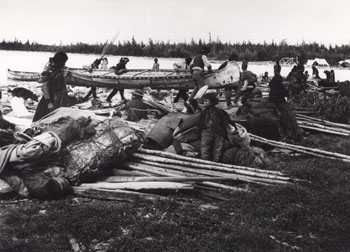 The Tlicho (also known as Dogrib) oral tradition is rich in stories about conflict with the T’atsaot’ine (also known as Yellowknives) on the lands just north of Great Slave Lake, in the 18th and 19th centuries. Around 1825, Edzo, leader of the Tlicho, and Akaitcho, leader of the T’atsaot’ine, made peace. By this time, non-Indigenous newcomers had been visiting Great Slave Lake for several decades. Akaitcho had met with Sir John Franklin at Fort Providence in 1820, initially agreeing to help guide Franklin and his men to the “shores of the polar sea.” Dene traded at North West Company posts, the first of which was established in the Slave River delta in 1786. Subsequent posts were established at the source of the Mackenzie and the mouth of the Yellowknife rivers. After the merger of the North West Company and Hudson’s Bay Company in 1821, Fort Resolution (Deninu Kue) became the principal trading post on the lake.

Social changes for Indigenous people living around Great Slave Lake intensified in the latter half of the 19th century with the arrival of Christian missionaries. The Sisters of Charity (Grey Nuns) opened the North’s first residential school at Fort Providence (1867-1960), while Anglican missionaries opened a residential school at Hay River, which operated from 1895 to 1937. A third residential school operated at Fort Resolution from 1903 to 1957. Children from Great Slave Lake and farther away attended these schools. After the 1950s, the federal government, and then the territorial government in 1969, took over responsibility for schooling in the territories and established student hostels and day schools, which operate in all of the communities on the shores of Great Slave Lake.

The south shore of Great Slave Lake was included in Treaty 8 when, in 1900, at Fort Resolution, Old Man (Emil) Drygeese signed as leader of the T’atsaot’ine from the northeast shore of Great Slave Lake. Chief Sunrise and Councillor Lamalice signed on behalf of the Hay River Dene. The remainder of Great Slave Lake was included in Treaty 11, which was signed in 1921 at Fort Providence by the Tlicho and other Dene groups from the region. During the negotiations of Treaty 11, First Nations groups were assured that they would not lose the right to hunt, fish, and trap on their traditional lands, but it is widely acknowledged that this promise was not honoured by the Canadian government. Métis at Fort Resolution and Fort Providence were not included in the treaties, but were instead issued “scrip” — a one-time payment intended to settle their legal claims with the government.

Prospectors had been looking for minerals in the exposed rocks along the shores of the lake since the late 19th century. In 1934, following the discovery of gold, there was a mining rush on the north shore of the lake. Consolidated Mining & Smelting (later Cominco) dominated gold production on Great Slave Lake with the opening of the Con Mine in 1938. After the Second World War it was joined by the Giant Mine, which opened in 1948. The Con and Giant mines closed within a year of each other in 2003 and 2004, respectively. Pine Point, an open-pit lead-zinc mine on the south shore of the lake, between Hay River and Fort Resolution, went into production in 1963. A town was built to serve the mine. The mine closed in 1988, and the town was abandoned shortly thereafter.

In addition to the mining operations on shore, the immediate postwar period saw the rise of commercial fishing on Great Slave Lake. Biologists working for the federal government surveyed the lake in 1944-45 and determined that its fish stocks could sustain increased harvesting, in addition to that carried out by the long-standing domestic and sport fisheries. As a result, the government established commercial fishing operations at Hay River, and aimed to manage stocks using scientific conservation methods. In the early years, many of the commercial fishers were non-Indigenous settlers or sojourners who travelled to the lake only during the short summer and winter fishing seasons. Local Dene and Métis fishers made up a greater proportion of commercial fishers in later decades. Lake whitefish and trout were the most important commercial species. Although sold locally and regionally in Western Canada, the most significant markets were in the United States.

Notwithstanding the federal government’s scientific oversight, the initial years of commercial production seriously strained the fish stocks in Great Slave Lake. Some species, like lake whitefish and lake trout, recovered. Others have had more complicated histories. Seasonal inconnu runs declined dramatically in the Yellowknife area in the 1940s and on the south shore of the lake near Buffalo River in the 1970s, but have been making a comeback around Yellowknife since 2000.

Pollution from local mining activities and long-range contaminants has been found in lake-bed sediments, fish, and other aquatic species. The biggest single source of pollution is the arsenic trioxide waste that was generated by the Giant Mine, 237,000 tonnes of which is now stored in underground chambers. During the life of the mine, arsenic tailings spilled into Back Bay, contaminating the water supply for the mine and the city of Yellowknife, as well as for the surrounding communities. The city’s water supply was relocated but contamination in Back Bay and Yellowknife Bay continued, primarily affecting the Dene communities of N’dilo and Dettah. Arsenic is currently found in higher concentrations in fish near the former mine site than elsewhere on the lake.

Climate change is contributing to changes in water levels on Great Slave Lake, although it is not the only factor. The construction of the W.A.C. Bennett dam on the Peace River in the late 1960s influenced water levels on Great Slave Lake, as the Peace-Athabasca system feeds the Slave River, and the Slave River in turn feeds the lake. While the Bennett dam tends to lower water levels, increased precipitation in the watershed (the result of climate change) raises water levels. Changes in the timing of high water can lead to unpredictable flooding along the lake shores, while lower water levels influence water quality, fish and animal habitats, and transportation. Climate change is also influencing ice cover on the lake, shortening the spring hunting period as a result of hazardous thin ice. 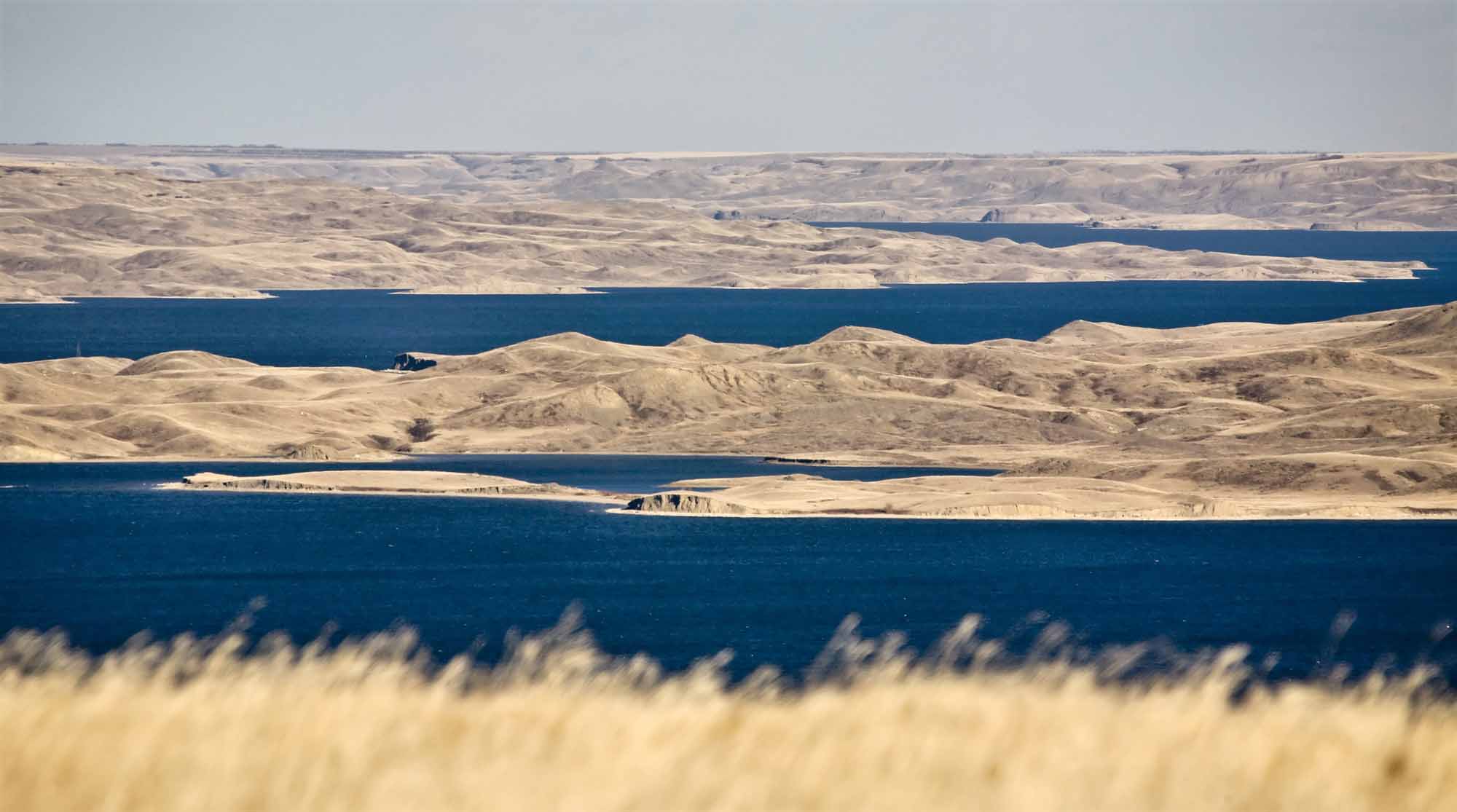 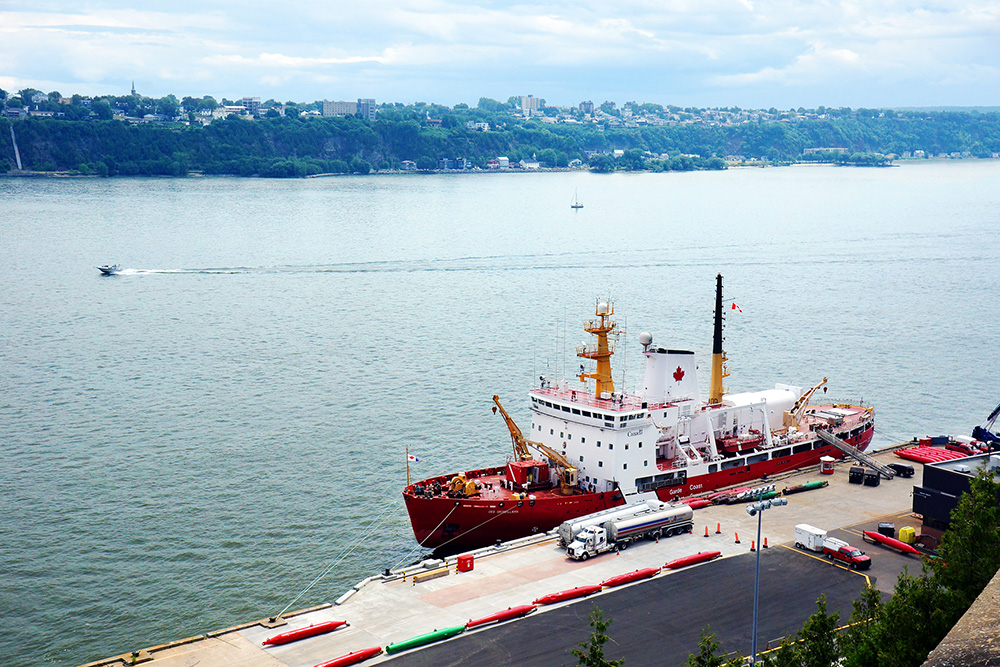 The Evolution of the Welland Canal