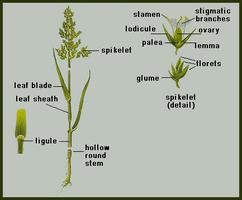 Grasses are among the most familiar and important flowering plants. They are used primarily as foodstuffs. Humans consume grasses directly as CEREALS (eg, wheat, corn, barley, rye, oats) or as sweetening (eg, sugar from sugar cane, molasses from sorghum). Most meat and dairy products are derived from grass-eating domesticated animals. Many wild animals are also grass eaters. Grasses contribute to the aesthetic environment as turfs gracing playing fields, golf courses and lawns, and as ornamental garden grasses. They stabilize soil and prevent erosion.

Emergence of Grasslands
Grasslands began to appear about 25 million years ago, changing the face of much of the world and providing food for grazing animals. Grasses and grazers evolved together. Grasses benefit because grazers control the growth of competing species and provide fertilizers. Grasses owe their success largely to peculiarities of their structure. They consist of vegetative structures (roots, stems and leaves) and reproductive structures (flowers and associated modified leaves).

Structures
Although most grass parts are like those of other flowering plants, certain structures are unique. Usually, the stems (culms) are hollow, except at points (nodes) where leaves are attached. However, some well-known grasses do not have hollow internodes, eg, corn (Zea mays) and big bluestem (Andropogon gerardii) of the Canadian prairies. The characteristic grass leaf consists of a sheath (basal portion of the leaf) surrounding the stem for some distance above the node. The part of the leaf that diverges away from the stem is the blade. At the junction of sheath and blade, there is often a small structure (ligule) forming a continuation of the sheath. Sheaths of grass leaves may be open (with edges overlapping but not fused) or closed (with fused edges). Closed sheaths are less common but are found in the widespread bluegrasses (Poa) and bromegrasses (Bromus).

Life Cycle
Grasses range in size from 3 cm (eg, Aira praecox of Vancouver Island) to 2 m (eg, Elymus cinereus of BC and Alberta). Their life cycle may be completed in a single year, as in many annual crop plants, or they may survive for hundreds of years, as do native prairie perennials. Canadians usually associate grasses with prairie vegetation, although they occur in all habitats except in the densest woods. Some grasses (eg, 3-awn grass, Aristida longiseta) are found in arid regions of British Columbia, others (eg, wild rice, Zizania aquatica) in eastern Canadian lakes. Certain genera (eg, Arctagrostis and Arctophila) are native to the Canadian Arctic.