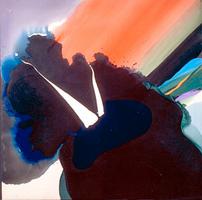 Gordon Rayner, painter (born 14 June 1935 in Toronto, ON; died 26 September 2010 in Toronto, ON). Renowned for his manipulation of painting materials, Rayner has been called "the carpenter" of contemporary Canadian art.

Gordon Rayner learned his craft from his father, a landscape painter, and worked in various commercial art firms, including Wookey, Bush and Winter with Jack Bush. An exhibition of William Ronald’s work at Toronto's Hart House turned his attention to abstraction. Rayner's early 1960s work, with its juxtaposed materials, experiments in canvas shape and sense of humour, reflects the neo-dada mood then prevalent in Toronto. In time he became a sumptuous painter of Canadian landscape, especially the area around Magnetawan, Ontario, in the Muskokas. His cityscapes reflect his home on Toronto's Spadina Avenue. Rayner's work boldly ricochets from one concern to another, even within the same painting, though his inventions are united by his broad touch and spectacular sense of colour.

The work Rayner produced during the last phase of his career was less oriented toward aggressive experimentation with material and techniques as it was sumptuous and painterly, often addressing emotionally potent and even spiritual themes. By the 1990s, Rayner’s style of painting (and painting in general) had gone out of fashion, and Rayner had largely withdrawn to Magnetawan and Mexico. Between October 1993 and June 1994, Rayner lived in Oaxaca in southern Mexico, creating what has come to be known as the Oaxaca Suite. While Rayner’s earlier work often evokes the sublimity and vastness of the Canadian landscape in a way familiar to the work of the Group of Seven, his work in Mexico was at the intersection of the very human and the divine. In Warrior Dancer (1993), for instance, there is a man wearing a deer head holding a hunting rifle sitting on a giant frog; in A Quick Shine Before the Dance #1 (1994) there is a man who resembles Rayner donning a ritual mask and a feather headdress reading the paper while he gets his shoes shined.