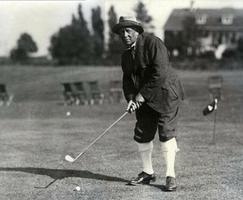 Golf is an outdoor game played with a small hard ball and a set of clubs with iron or wooden heads. The object of the game is to make one's way round a specially laid out course in as few strokes as possible, hitting the ball from certain starting points, or tees, to specific targets, which are holes set in the ground. Most golf courses have 18 holes. The name "golf" probably derives from the German kolbe, meaning "club."

The game's ancestry is obscure, but golf as we know it was first played in Scotland in the last half of the 15th century, although the Scottish Parliament by 1491 had passed 3 edicts ordering that it be banned, reasoning that interest in it kept people from more practical pursuits and interfered with military activities. Golf spread, nonetheless, and when native Scots emigrated to Canada, they took what came to be known as the "Royal and Ancient Game" with them.

The first golf club in Canada was the Montreal Golf Club, founded in Nov 1873 by Scotsman Alexander Dennistoun; he was also the first president and the captain of the club. He was joined in his efforts by John G. and David D. Sidey, Scottish brothers who had immigrated to Canada. The first course for the Montréal club was over property called Fletcher's Field, owned by the city of Montréal. In 1884, Queen Victoria, through the earl of Derby, bestowed upon the club the "Royal" prefix. The Quebec Golf Club (now Royal Quebec Golf Club) was founded in 1874. Play was over Cove Field between the Citadel and the Plains of Abraham. Canada's third course belonged to the Toronto Golf Club, founded in 1876.

The fourth was the Brantford (Ont) Golf Club, begun in 1879. One of its members, Ralph H. Reville, began Canada's first golf magazine, Canadian Golfer, in 1915. The magazine continued under Reville's direction through 1932 and became the primary source for early Canadian golf history. Canada's first 18-hole course was the Victoria Golf Club, started in 1893; until then golfers had played over 9 holes. In 1894 the Winnipeg Golf Club was founded, followed by the Calgary Golf Club in 1895 and the Halifax Golf Club and the Edmonton Country Club in 1896. By the turn of the century, golf was firmly established in Canada. The first municipally owned and operated golf course was opened by the city of Edmonton in 1912, and within a short time there was hardly a town in Canada that did not have a golf course. Today, Canada has numerous outstanding courses, with the National Golf Club in Woodbridge, Ont, and Glen Abbey Golf Club in Oakville, Ont, generally considered the best championship courses.

Seeking competition and camaraderie, club members began to play against one another. The first interclub match was held on Cove Field in Québec City in 1876 and the host team defeated Montréal by 12 holes. The first interprovincial match took place in 1882 when Québec played Ottawa at Montréal. The Canadian Golf Association, later to become the Royal Canadian Golf Association (RCGA), was formed in 1895, spurred on by the efforts of A. Simpson, secretary to the Royal Ottawa (formerly Ottawa) Golf Club. The RCGA aimed to promote and develop golf in Canada, to protect the mutual interests of its members, establish consistency in the handicapping, or rating, of golfers, and to conduct national championships. In 1895 it conducted the first Canadian amateur championship, at the Royal Ottawa course. The winner was Tom Harley, a Scotsman who had moved to Kingston, Ont.

At first, the RCGA conducted national championships for men and women. The first Ladies' Championship of Canada was held in 1901 at Royal Montreal and was won by member Lily Young. In 1913, Florence Harvey, a member of the Hamilton (Ont) Golf Club, founded the Canadian Ladies' Golf Union. She had recently competed in England and, observing the good work of the Ladies' Golf Union there, saw no reason why a similar organization could not exist in Canada. By 1924 the CLGU, now the Canadian Ladies' Golf Association, was ready to take over its own championship and the RCGA relinquished control. The CLGA adopted similar objectives in women's golf to those of the RCGA in men's.

As more novice golfers joined clubs across Canada, the need for instructors was met by the many Scots who had been working at Canadian clubs and were adept at golf. They brought a knowledge of the game's principles and transmitted them to their members. By 1911 there were so many club professionals that they formed the Canadian Professional Golfers' Association. Their inaugural championship was held in 1912 at the Mississauga Golf Club, near Toronto. Earlier, the first Canadian Open had been conducted by the RCGA in 1904. It was won by J.H. Oke, an Englishman who had spent some time in Canada, but 8 of the next 10 Opens were taken by professionals firmly ensconced at Canadian clubs. George Cumming, professional to the Toronto Golf Club 1900-50, brothers Charles and Albert Murray of the Royal Montreal and Outremont (Qué) clubs, and Karl Keffer of Royal Ottawa starred in that decade of tournaments. It became obvious that professionals could both teach and play golf. Eventually these roles were divided, as memberships swelled and competition became so fierce that anybody who wanted to play for a living had to be devoted to practice and competition.

At the same time, Canadian amateurs were also busily engaged in their sport. George S. LYON, a former cricketer who played golf at the Rosedale and Lambton clubs in Toronto, won the Canadian amateur title 8 times between 1898 and 1914, as well as the 1904 Olympic golf event. C. Ross (Sandy) Somerville of the London Hunt Club won it 6 times 1926-37; and Ada MACKENZIE, founder of the Ladies' Golf and Tennis Club in Thornhill, Ont, won the Canadian ladies' amateur title 5 times 1919-35. They were later joined as top amateurs by Marlene Stewart STREIT, 11-time ladies' amateur champion, ladies' British Open amateur champion (1953) and US women's amateur champion (1956); and Gary Cowan of Kitchener, Ont, winner of the US men's amateur in 1966 and 1971. During Somerville's tenure as Canada's top amateur (he also won the US men's amateur in 1932), the interprovincial team matches for the Willingdon Cup had been inaugurated in conjunction with the Canadian amateur. The matches began in 1927 when Governor General Viscount Willingdon presented the cup to the RCGA. Four-man teams have competed annually for the trophy after emerging from provincial playdowns. As the top golfers edged into middle age, senior championships arose to fill the need for competition and Lyon himself took the first 6 events held by the Canadian Senior Golf Association from 1918 to 1923.

On the professional side, the Canadian Open became one of the most sought-after titles in golf as players from Canada, the US and around the world competed for prizes that rose to $2.2 million US by 1999. From 1920 to 1935 the Open was played for the Rivermead Cup; from 1936 to 1970 the Seagram Gold Cup was at stake; and after 1971 competition was for the Peter Jackson Trophy. On the US men's pro tour, Canadian Stan LEONARD won 3 events 1957-60, while George KNUDSON had won 8 by the time he turned to teaching in the late 1970s; he had also won the 1968 World Cup with Al Balding. On the women's tour, Sandra POST of Oakville, Ont, won the Ladies Professional Golf Association championship on her first year on the tour and won more money than any Canadian professional, male or female. In 1980 Dan HALLDORSON and Jim Nelford won the World Cup of professional golf for Canada; that same year Halldorson won on the US tour and in 1981 Dave BARR of Kelowna, BC, did the same. In 1984 Nelford, Halldorson and Barr were all among the top 100 money winners on the US tour.

Today, Canadian professionals play around the world on the Asian, European, and US Tours with considerable success, including 3 different Canadian winners on the LPGA Tour in 1992 and one, Richard Zokol, on the lucrative PGA Tour. Revitalization of the Canadian PGA Tour occurred during the 1980s. The Tour now has over 15 events with over $2 million in prize money. Young professionals from all over the world come to play the tour and many graduate to the US PGA Tour.

More than 1300 clubs belonged to the RCGA by the 1980s. Junior golf had been strong since the first Canadian junior was held in 1938. The best junior women golfers had competed for the Canadian junior girls' championship since 1955. Stimulated by the prize money available in golf around the world and encouraged by the RCGA, the CLGA, and provincial golf associations, junior golfers began to look to golf as a career and to attend college on golf scholarships. In 1979 the Canadian Golf Foundation, an arm of the RCGA, was founded to act as a clearing house for Canadian golf information. In 1982 the foundation offered scholarships for eligible Canadians to attend college.

The long tradition of golf as a participant sport, the pleasant environment in which it is played, and the long life of the sport for individuals ensure that it will remain a popular hobby. There is something in golf that keeps people interested - perhaps the personal test of ability - and despite severely increasing land costs, escalating fees for play, and the undeserved reputation of the game as a sport exclusive to the leisured and moneyed class, golf has endured for centuries.