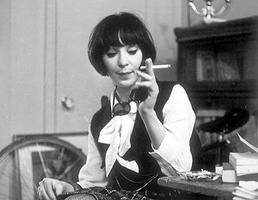 Gilles Groulx, film director (b at Montréal 30 Aug 1931; d 21 Aug 1994). In 1956 Groulx joined the NFB as a film editor and co-directed with Michel BRAULT the celebrated documentary Les Raquetteurs (1958). After directing numerous documentaries, he turned to feature films and produced the now classic Le Chat dans le sac (1964). He pursued his interest in cinema, politics and aesthetics with energy, directing 3 feature films in the next 3 years.

In Où êtes-vous donc? (1968), Groulx held back from a direct exposé of Québec politics, employing instead a fragmented and lyrical script which related image and commentary in the esoteric manner of Jean-Luc Godard. Harping on revolt and revolution and citing Marxist ideas, he leaned heavily on media and advertising in Entre tu et vous (1969). After this fictional approach to political commentary, he pursued the same agenda through documentary, but 24 Heures ou plus... (1972-76) was deemed too politically controversial and was suppressed for 5 years.

Groulx left the NFB in that period but returned in 1977 to participate in a series of documentary co-productions between Canada and Mexico. Primera pregunta sobre la felicidad/Première question sur le bonheur (1977) gives a voice to peasants and aggressively promotes the cause of land reform. In 1980 he began production of a film opera, Au pays de Zom, with a score by Jacques HÉTU and starring the singer Joseph ROULEAU. A serious car crash and resulting injuries prevented his completing this until 1982. An operatic satire with a social message, Au pays de Zom requires cerebral analysis from spectators and confirms Groulx's reputation as a demanding filmmaker. He was awarded the Albert-Tessier Prize in 1985.

Groulx did not go back to filmmaking. He ended life forgotten and poverty-stricken.