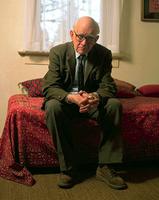 George Woodcock, author, editor, humanitarian (b at Winnipeg 8 May 1912; d at Vancouver 28 Jan 1995). A prolific writer, George Woodcock appears as author or editor on some 150 books and pamphlets, plus numerous radio and TV scripts and documentaries, while thousands of letters remain unpublished.

As George Fetherling points out in his biography The Gentle Anarchist (1998), Woodcock's life divides along the lines of the two countries in which he resided. Though born in Canada, Woodcock saw his immigrant family return to the UK within two years of his birth. Building a literary career there, Woodcock would not return to Canada until 1949. The London literary marketplace could still furnish freelance writers and reviewers with a living, and Woodcock's loose associations with the writers and journalists converging around the district known as Fitzrovia provided him a habitat for his writing. Fugitive journals flourished amid the ferment of ideas there, and Woodcock's work then included editing such periodicals as Now (1940-47), War Commentary and Freedom. His own philosophical and political leanings had by then cohered into philosophical anarchism; he held conscientious objector status during the Second World War. These beliefs led to one of his most enduring works, Anarchism (1962), which still functions as a guidebook to this movement. His professional relationship with George Orwell (author of Animal Farm and 1984) during those Fitzrovian years lay behind another of Woodcock's major works, the Governor-General's Literary Award-winning biography, The Crystal Spirit (1966).

Woodcock returned to Canada in 1949 a seasoned writer, enduringly partnered with Ingeborg Linzer Roskelly, who shared and influenced every aspect of his life, personal and professional. The failure of the couple's attempts to subsist on Vancouver Island as market gardeners led to their permanent move to Vancouver in 1955. It was there, at the University of British Columbia, that Woodcock's most distinguished contribution to Canadian culture took root and flourished.

The first issue of the quarterly Canadian Literature appeared in September 1959 under Woodcock's editorship, which would continue for 17 years. Unlike most academic journals, Canadian Literature fostered close ties with the contemporary writing community, academically-based and otherwise. A reader could find in its pages valuable critical work produced for both a general and an academic audience, in addition to original poetry and personal memoir. The periodical at once stimulated and reflected the growth of interest in Canadian writing. It contributed to a cultural climate which would establish institutional support for the Canadian literary enterprise. Canadian Literature appeared at what seems in retrospect the perfect time, during which writers, critics and scholars alike collaborated in insisting that Canadian writing merited serious attention. To Woodcock belongs the credit for creating a forum for discussion more inclusive than any offered by the typical academic journal. Such an outlook solidified the growing conviction that Canadian literature deserved what our culture now assumes to be any body of writing's safest means of enduring: a presence in school classrooms. Woodcock also wrote many widely accessible introductions to new Canadian books that interested him. His guiding vision during the 73 issues that he produced as Canadian Literature's founding editor was part of the same thrust: the contention that a critical engagement with Canadian literature could attract both a professional and a lay audience. His editorial tenure came as close to realizing this vision as any Canadian literary periodical has ever managed.

Woodcock's editorial duties did not slow his production of essays and full-length books; his masterpiece Gabriel Dumont (1975) appeared during this time. In the Métis rebel captain Woodcock found a subject who matched his own requirements for greatness: a figure at once self-effacing, vastly competent and the representative of a stateless community heroically resisting the encroachments of an overweening state, in this case the emergent Canadian one. The biography depicts in detail the buffalo hunt - with its democratic customs and communally-regulated laws - that formed the basis for the prairie Métis economy. Woodcock's account also analyses Dumont's disastrous reverence for the book-learned and mystical figure of Louis Riel, whose impractical ideology ensured initial victory and final defeat for the cause of his people. Gabriel Dumont, Anarchism and The Crystal Spirit stand as Woodcock's most enduring books. All of them deal with individuals or groups whom history views as free spirits. Three volumes of memoirs trace the growth of Woodcock's own spirit. His several volumes of poetry are memorable chiefly for the imaginative account they offer of the cross-cultural experiences gained from his travels.

An inveterate traveller and curious observer, it was typical of Woodcock to write a ground-breaking survey of West Coast aboriginal art and culture soon after his arrival in BC (Ravens and Prophets, 1952). His 1979 The Canadians demonstrates his hold on the homeland he reclaimed in maturity. Woodcock's detailed and purposeful journeyings also led to his role as a humanitarian. Impressed by the collective strength of the Tibetan exile community that he and his wife encountered during a visit to India, the Woodcocks formed a friendship with the Dalai Lama. This in turn led to the establishment of the Tibetan Refugee Aid Society, sustained by tireless activity on the couple's part. Similar labours resulted in the Canada-India Village Aid foundation. The couple also donated their life savings to the establishment of an emergency fund for distressed Canadian writers.

Ever true to his principles, Woodcock turned down membership in the Order of Canada, but accepted a number of other honours that he considered to have been awarded by his peers rather than by the state. The recipient of six honourary degrees, he also accepted the 1972 Molson Prize from the Canada Council. The city of Vancouver declared 7 May 1994 George Woodcock Day. At the time of his death, he was at work on a translation of Marcel Proust's seven-volume sequential novel, À la recherche du temps perdu.