Ontario is divided by three of Canada’s seven physiographic regions. These three regions are the Hudson Bay Lowlands, the Canadian Shield and the St. Lawrence Lowlands. Agriculture, as well as most of the population, is concentrated in the south. Despite the tendency to divide the province into three regions, there are distinct areas within these broad classifications. Geology, climate, soil and vegetation combine to create these distinct areas.

Ontario is divided by three of Canada’s seven physiographic regions. These three regions are the Hudson Bay Lowlands, the Canadian Shield and the St. Lawrence Lowlands. Agriculture, as well as most of the population, is concentrated in the south. Despite the tendency to divide the province into three regions, there are distinct areas within these broad classifications. Geology, climate, soil and vegetation combine to create these distinct areas.

Ontario has the most varied landscape of any Canadian province. Two-thirds of the province lies under the Canadian Shield. The Canadian Shield covers most of the North, with the exception of the Hudson Bay Lowlands. To the east lies the eastern Ontario plain, between the Ottawa and St. Lawrence rivers. To the west, from  Kingston on, there are belted rolling hills and plains. Extreme southwestern Ontario is comparatively flat. The Niagara Escarpment extends from Niagara north to Tobermory, and through Manitoulin Island in Georgian Bay. 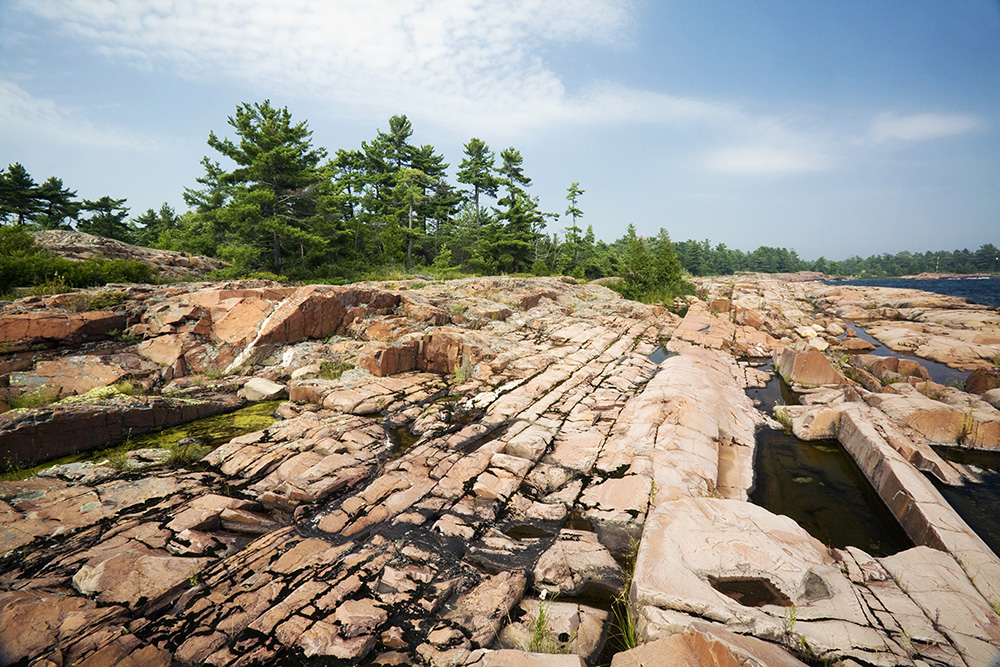 An outcrop of the Canadian Shield on the shores of Georgian Bay, Ontario.

The rocks of the Canadian Shield are among the oldest on Earth. They date from the Archaean and Proterozoic eons of the Precambrian era (542 million to 4 billion years ago). These formations contain the large mineral deposits that are so important to the economy of Northern Ontario.

The sedimentary limestone, shale and sandstone underlying Southern Ontario are more recent than the Shield. These rocks date from the Paleozoic era. They are generally of the Ordovician, Silurian and Devonian periods (485 to 359 million years ago). Except for the Niagara Escarpment, outcrops of these rocks are rare.

All of Ontario was, at one time or another, covered in ice. As recently as 11,000 years ago the last ice sheet covering the province receded. As the ice receded it carved the many lakes in the North. It also created the beginnings of the Great Lakes along Ontario’s southern and western borders. These early Great Lakes were considerably larger than their present descendants. As they evolved, they left behind a sand base. Many of the province’s first roads were located along this sand base. The rivers that once drained the lakes, such as the Grand River, now flow through broad valleys.

The effect of the ice age is still apparent. Scattered across Southern Ontario are rocks left behind by the glaciers. Systems of moraines, marking the edges of stalled glaciers, run across the province. The Oak Ridge Moraine, forming the height of land between Lake Ontario and Georgian Bay, is the most prominent. The Horseshoe Moraines parallel the eastern shore of Lake Huron to the base of the Bruce Peninsula and southeast along the escarpment, then southwest toward Lake Erie. Other deposits, called drumlins, are especially frequent in the Peterborough region. 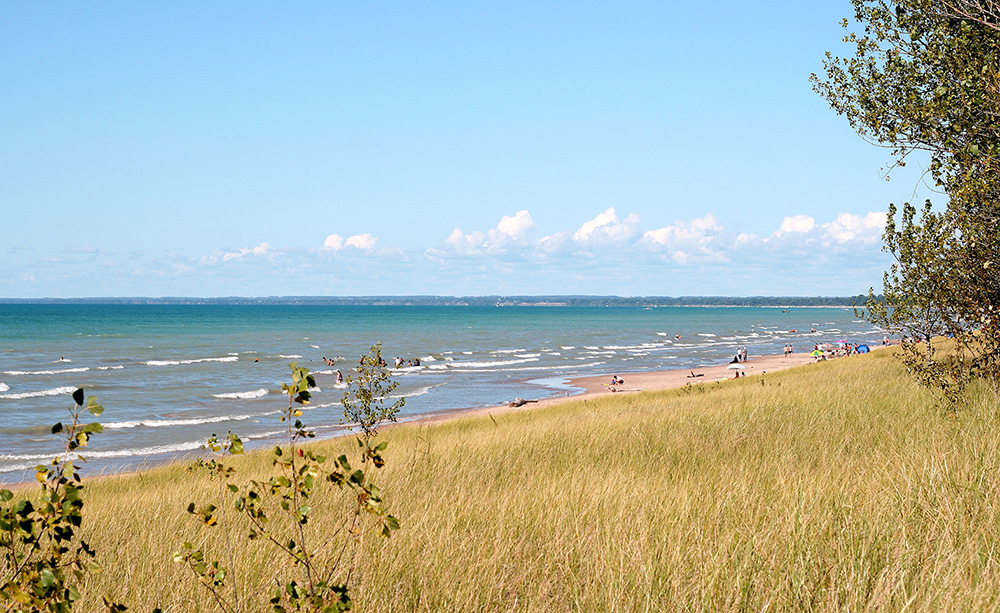 The shores of Lake Huron in Pinery Provincial Park, Ontario.

Ontario has over 250,000 lakes, which contain approximately one-fifth of the world’s fresh water supply. Except for Lake Michigan, Ontario includes a portion of all the Great Lakes (i.e., lakes  Superior, Huron, Erie and  Ontario). Other major lakes include Lake Nipigon (4,848 km2), Lake of the Woods (3,150 km 2 and spanning the Minnesota and Manitoba borders) and Lac Seul (1,657 km 2).

Ontario also has many rivers. Rivers in Southern Ontario flow into the Great Lakes and the St. Lawrence River system and eventually to the Atlantic Ocean. In Northern Ontario, rivers drain into James Bay and Hudson Bay. Major rivers headed for the Atlantic Ocean include the Ottawa River, which rises in western Quebec and forms a natural border between Ontario and Quebec. Major rivers flowing into James Bay and Hudson Bay include the Severn and the Albany.

Ontario has a wide range of climates. The temperature can reach above 30°C in the summer and dip to -40°C in the winter, with regional variations in temperature throughout the province. In the North, a bitter subarctic climate prevails. Here, there are mean daily temperatures of 16°C in July and -22°C in January. Winter temperatures are highest along the Great Lakes in southwestern Ontario and below the Niagara Escarpment. In this part of the province, January mean daily temperatures range from -3°C near Windsor to -3.7°C in Toronto. In July, the area between Chatham and Windsor is warmest (22°C).

The winters are severe and stormy through much of the province. The areas receiving westerly winds off the Great Lakes are often called the “Snow Belt.” For example, the areas south of Owen Sound, around Parry Sound and west of Sault Ste. Marie receive snowfall in excess of 250 cm. By comparison, the areas around Toronto and Hamilton are in the partial rain shadow of the Niagara Escarpment. As a result, they receive less than 150 cm of snow annually. 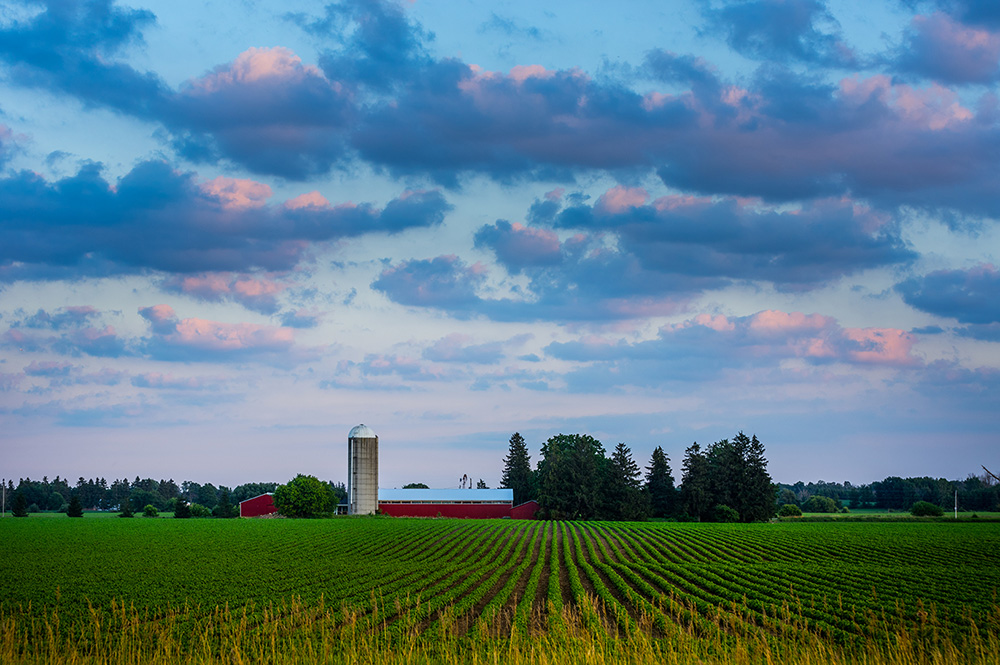 The Canadian Shield is generally unsuitable for agriculture. The podzolic soils in this northern region are extremely thin and low in fertility. However, they are still sufficient enough to support boreal forests (see Soil Classification). There are only a few areas, such as the clay belts in northeastern Ontario or the Rainy River area in the northwest, where enough farming is possible to suggest an agricultural landscape.

Northern Ontario’s forest cover is not uniform. In the extreme north, stunted willows and black spruce struggle to grow in bogs. Farther south, spruce, aspen and jack  pine dominate the northern Canadian Shield. Farther south again, to the east and west of Lake Superior, the Shield is covered by a mixed forest, known as the Great Lakes–St. Lawrence forest region.

In the early 19th century, magnificent stands of white pine, the foundation of the central Canadian forest industry, as well as hard maples, were found in eastern Ontario. However, logging dramatically reduced the number of white pines in northern Ontario.

The grey-brown luvisolic soils of southern Ontario are reasonably fertile. They developed under forest vegetation from till and glacial deposits. Deltas, left behind from the ice age, form sand plains, especially to the north of Lake Erie.

Ontario is home to 334 provincial parks and six national parks — Bruce Peninsula, Georgian Bay Islands,  Point Pelee, Pukaskwa, Thousand Islands and Rouge. Rouge, located in the Greater Toronto Area, is Canada’s first national urban park. The province’s oldest provincial park is Algonquin, established in 1893. The remainder of the provincial parks range from Rondeau Provincial Park on Lake Erie in the south to Polar Bear Provincial Park in the north. At approximately 2.4 million hectares, Polar Bear Park is Ontario’s largest park and is accessible only by air. 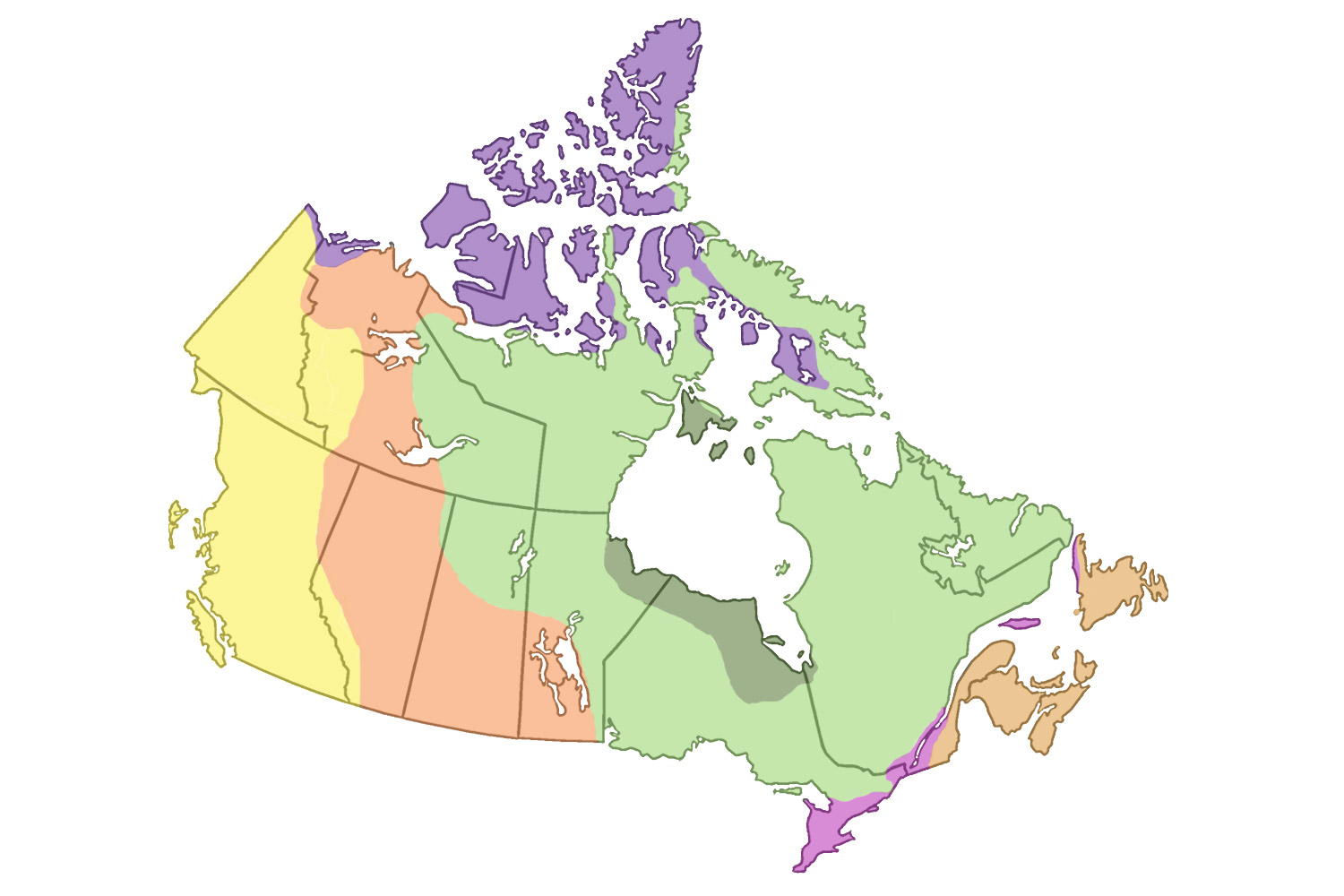