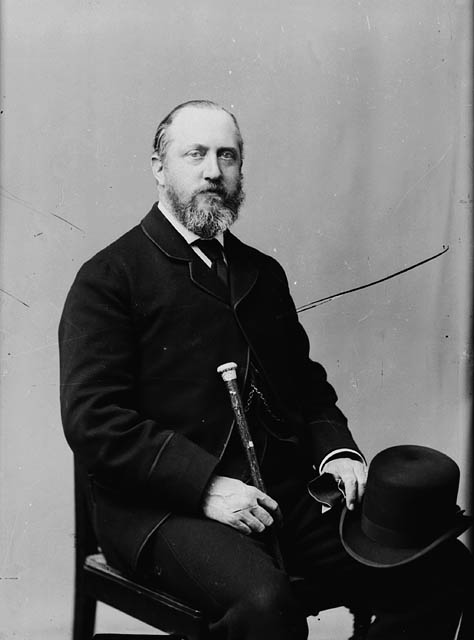 Frederick Arthur Stanley was the second son of Edward Stanley, 14th Earl of Derby and prime minister of the United Kingdom in 1852, 1858–59 and 1866–68, and Emma Caroline Bootle-Wilbraham, the daughter of Edward Bootle-Wilbraham, 1st Baron Skelmersdale and Member of Parliament.

The Stanley family is descended from Thomas Stanley, 1st Earl of Derby, who played a decisive role at the Battle of Bosworth Field in 1485. He reputedly found King Richard III’s crown on the battlefield and placed it on the head of his stepson, the first Tudor king, Henry VII.

Frederick Arthur Stanley received his secondary education at Eton College in Windsor. He joined the Grenadier Guards regiment in 1858 and retired as a captain in 1865, when he was elected Conservative Member of Parliament for Preston, a constituency near his family’s estates in Lancashire. He served in a series of government posts, including Lord of the Admiralty (1868), Financial Secretary to the War Office (1874–77), Financial Secretary to the Treasury (1877–78) and Secretary of State for War (1878–80). In 1885–86, Frederick served as Secretary of State for the Colonies and corresponded with Canadian prime minister John A. Macdonald. He was also president of the British Board of Trade (1886–88). Stanley was a close friend of the future King Edward VII and hosted the future King George V at Rideau Hall in 1890.

In 1886, Frederick Arthur Stanley received the title of Baron Stanley of Preston. On 1 February 1888, British prime minister Lord Salisbury offered him the position of governor general of Canada. He arrived in Quebec with his wife and four of their children in June. Lady Stanley wrote to her sister that “[Frederick] has made a very great and good impression by his French.” In addition to their official residences in Ottawa and Quebec City, the family purchased property for a country house, Stanley House, on the Cascapedia River in Quebec. Stanley enjoyed his time in Quebec, as he was disappointed with his official residence in Ottawa and described it as “the unsightly and unhealthy patchwork building known as Rideau Hall.” As governor general, Stanley was patron of the Royal Canadian Yacht Club, Royal Society of Canada and Rideau Curling Club. He received an honorary doctor of laws degree from Queen’s University at Kingston in 1889.

Stanley was committed to the political impartiality of the governor general’s office and refused to interfere in the passage of controversial legislation. This included the Jesuits’ Estates Act of 1888, which offered the Roman Catholic Church a financial settlement to incorporate former Jesuit lands as Crown lands, a measure opposed by English Protestant public opinion. Stanley developed a strong rapport with Sir John A. Macdonald and hesitated to appoint a successor when the prime minister died in 1891. After Macdonald’s funeral, Stanley invited John Abbott to form a government, concerned that the other potential candidate, Sir John Thompson, would not have the support of Ontario Protestants because he had converted to Roman Catholicism at the time of his marriage. When Abbott resigned due to ill health after 17 months as prime minister, Stanley invited Thompson to form a government in 1892. 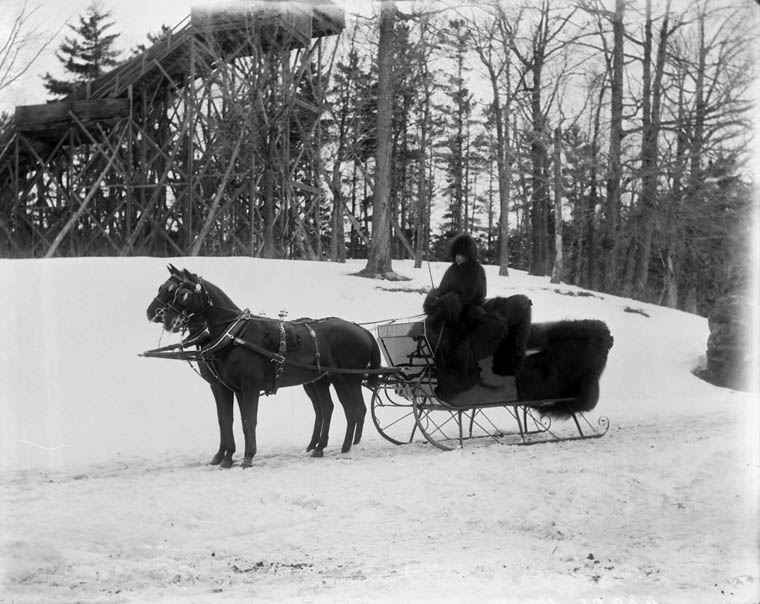 In 1889, Lord and Lady Stanley and two of their children, Edward and Isobel, toured western Canada. In Victoria, British Columbia, Stanley praised the provinces that he had visited so far, stating in his speech at Government House, “In all parts of the Dominion, I have been met by kindness so spontaneous and overpowering that each place I have visited I would like to make my home. I lost my heart to Quebec, I am thoroughly content to remain in Ottawa once I reached there, pronounced Manitoba a splendid place for a man to make his home, and find British Columbia unequalled among them all.” During the tour, Stanley met with First Nations leaders and travelled on the recently completed Canadian Pacific Railway, which he considered “unrivalled in the world as a marvel of engineering triumph.” He also opened Stanley Park in Vancouver and dedicated the park to “the use and enjoyment of people of all colours, creeds and customs for all time.” In 1890, Stanley toured the Atlantic provinces and visited an industrial exhibition in Saint John, New Brunswick.

Stanley was expected to remain in office as governor general until September 1893. However, he became the 16th Earl of Derby upon the death of his childless elder brother in April of that year and had to return to the United Kingdom. He departed Canada for the United Kingdom in early July, writing to Thompson that “I cannot say how deeply I shall feel the severance of my connection with Canada.” In his farewell address to Parliament, Stanley stated, “I assure you that Lady Stanley and I will always look back upon our five years stay in Canada as the happiest period of our lives.”

Frederick Arthur Stanley and his family assumed a leadership role in the development of ice hockey in late-19th-century Canada. Stanley attended his first hockey game at the Winter Carnival in 1889, which the Montreal Gazette described as “one of the finest exhibitions of the Canadian national winter game.” He later commissioned a rink on the Rideau Hall grounds and helped finance the Ottawa Hockey Club. Three of Stanley’s children became amateur hockey players and influenced his decision to donate the Stanley Cup. Arthur and Algernon organized and played on the Rideau Rebels team, along with James Creighton, who organized the first recorded indoor ice hockey game in Canada in 1875, and members of the Coldstream Guards. Isobel participated in the first recorded women’s ice hockey match, which took place on the Rideau rink on 10 February 1891.

On 18 March 1892, Stanley announced the donation of the Dominion Hockey Challenge Cup in a message read by his aide, Frédéric Lambert (Lord Kilcoursie), a member of the Rideau Rebels team. The announcement was made at the Rideau Club, where the Ottawa Hockey Club was celebrating winning the championship of the Ontario Hockey Association.

Stanley’s message stated, “I have for some time been thinking that it would be a good thing if there were a challenge cup which should be held from year to year by the champion hockey team in the Dominion of Canada. There does not appear to be any such outward sign of a championship at present, and considering the general interest which matches now elicit, and the importance of having the game played fairly and under rules generally recognized, I am willing to give a cup which shall be held from year to year by the winning team.” 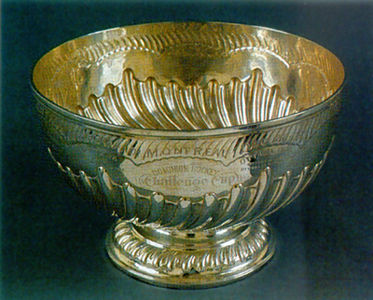 Originally known as the Dominion Hockey Challenge Cup, the trophy began to be known by its donor's name by the mid-1890s.
(courtesy Canadian Sports Hall of Fame)

The new trophy was a silver bowl, engraved with the words “Dominion Hockey Challenge Cup” and “From Stanley of Preston” and displaying the Stanley family’s crest. Stanley hoped that the cup would bring together various provincial hockey associations and encourage competition across Canada. The Stanley Cup, as the trophy became known, was the de facto championship trophy for the National Hockey League (NHL) in 1926. The NHL received control of the Stanley Cup in 1947.

Following his return to the United Kingdom, the new Earl of Derby became the lord mayor of Liverpool from 1895 to 1896, the first chancellor of the University of Liverpool in 1903 and president of the British Empire League in 1904. He devoted much of his time in his later years to philanthropy and horse racing. He died of heart failure in 1908.

Stanley was honoured by the Hockey Hall of Fame in 1945 as an “honoured builder” of the sport in Canada. The Stanley Cup is the oldest trophy awarded to a professional sports team in North America. The National Women’s Hockey League’s championship trophy is the Isobel Cup, named in honour of Stanley’s daughter, Isobel, and her participation in Canada’s first recorded women’s hockey game.

There are many places across Canada that are named in his honour, including Port Stanley, Ontario; Stanley Park in Vancouver, British Columbia (which contains a statue of Stanley that was unveiled in 1960); Stanley Peak in the Rocky Mountains; Stanley, Nova Scotia; Stanley, New Brunswick; and the Rue Stanley in Montreal.