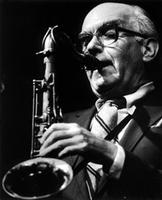 (John) Fraser MacPherson. Tenor and alto saxophonist, flutist, clarinetist, b Winnipeg 10 Apr 1928, d Vancouver 27 Sep 1993. Raised in Victoria, BC, he played clarinet as a youth under the influence of traditional New Orleans jazz, and then took up alto and tenor saxophone, adopting for the latter a mainstream style in the lineage of Lester Young. Living after 1948 in Vancouver, except for a period 1956-7 when he studied in New York with Vincent James Abato (saxophone) and Henry Zlotnick (flute), MacPherson worked for 20 years in local nightclubs, among them the Palomar (1950-4, in turn with the bands of Chuck Barber, Bob Reid, and Lance Harrison) and the Cave (1961-3 with Chris Gage, 1964-70 leading his own band). Concurrently he was a first-call studio musician (saxophone, flute, and clarinet) and on occasion, beginning in 1958, played saxophone with the Vancouver Symphony Orchestra.

For many years MacPherson pursued his jazz career largely on CBC radio and TV, initially as a member ca 1951 of the Ray Norris Quintet and later as a featured sideman with Gage, Bobby Hales, Ian McDougall, Doug Parker, Dave Robbins, and others on such shows as 'Jazz Workshop.' He was heard on alto saxophone as the leader of a nonet in the so-called West Coast style on 'Jazz Workshop' and 1963-4 with a string orchestra in a CBC series of his own. In 1975 MacPherson formed a trio with Oliver Gannon (guitar) and, initially, Wyatt Ruther (bass). Its first LP, drawn from a CBC broadcast that year at the MacMillan Planetarium, was issued under MacPherson's own West End label and sparked wider interest in his controlled, elegant tenor style, leading to a belated, if modest, career on the international jazz stage.

In 1978, under the aegis of Overture Concerts, he made the first of an unprecedented four tours in the USSR; the others followed in 1981, 1984, and 1986. MacPherson also performed under RCI sponsorship in Europe in 1979. In Canada he made several national club and/or concert tours and performed at most of the major festivals - eg, the FIJM in 1982 and 1984, Jazz City in 1984 and 1986, and regularly at the du Maurier Ltd International Jazz Festival Vancouver. He also appeared on occasion in the USA and in 1986 performed in Australia. Until 1993, he appeared frequently in Vancouver, at Salt Spring Island, and other BC venues. He recorded his album In the Tradition (CCD-4506) in November 1991 with his quintet.

MacPherson remained a favourite on CBC radio jazz shows, among them 'Jazz Radio-Canada' and 'Jazz Beat,' and was host in the summer of 1977 for the former program's series devoted to the history of jazz. He also taught at Douglas College, New Westminster, BC, and at the Vancouver Community College. MacPherson shared a Juno Award in 1983 with Oliver Gannon for best jazz album (I Didn't Know about You) and was made a Member of the Order of Canada in 1987. In 1993, at the FIJM, he was awarded the Prix Oscar Peterson for lifetime contribution to jazz. The Pacific Music/Fraser MacPherson Music Scholarship Fund assists young instrumentalists.

Mark Miller has noted that, as the first Canadian to record with the Concord Jazz label, and through his tours of the USSR, MacPherson contributed much to awareness of Canadian jazz musicians outside Canada's borders.