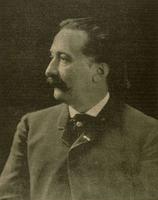 The grandson of Belgian organists, he began studying the violin at four with Nicholas Servais and was admitted the following year to the class of François Prume, his mother's brother, at the Liège Cons. (After the latter's death in 1849 Jéhin added Prume to his own name.) He then enrolled at the Brussels Cons in the class of Hubert Léonard and studied harmony under Fétis. While taking courses in science he continued studies or consultations with such notable violinists as de Bériot, Wieniawski, and Vieuxtemps.

After appearing as a soloist 1852-4 in Brussels, Liège, and Spa, Jéhin-Prume embarked upon his first European tour, 1855-7, playing in Germany, Poland, Austria, and Russia. His success brought him many honours as well as another tour in Germany and Russia, where he stayed from 1857 to 1858, performing in Moscow and St Petersburg at concerts in which such celebrities as the Rubinstein brothers, and Jenny Lind also participated. He returned to Belgium in 1858, resumed his studies in harmony and devoted himself to composition. He gave numerous concerts 1860-2 in Holland, France, and Belgium and in 1862 was appointed concertmaster at the Théâtre royal in Liège, but retained the position for only a few months. That same year he made another tour in Germany (Meyerbeer accompanied him at the piano in his Potsdam recital), followed by concerts in Scandinavia and Holland. On his return to Brussels in 1863 he was appointed by Leopold I 'violinist of the king's own music,' succeeding Charles de Bériot.

In 1864 Jéhin-Prume accepted an invitation to Mexico from the Emperor Maximilian, who had married Princess Charlotte, the daughter of Leopold I. He gave several concerts at the Imperial theatre and for four months continued to perform in the country despite the constant political strife. After a short stay in Brazil and a visit to Havana he arrived in New York early in May 1865.

Shortly afterwards he visited Canada to fish and hunt, at the invitation of his fellow countryman, the violinist Jules Hone. At the request of the Jesuits, he donated his services for a charity concert in the Salle du Gesù in Montreal. His piano partner for the occasion was R.-O. Pelletier. Subsequently, D.H. Sénécal and Gustave Smith, representatives of the musicians of Montreal, visited the artist and made him promise not to leave the country without performing at another concert. This took place 1 June in the Nordheimer Hall with the participation of several Montreal musicians, including A.J. Boucher and Calixa Lavallée. Such was his success that, by popular demand, he gave a third concert 8 June at the Mechanics' Hall.

A few days later, at a reception by the mayor, J.-Louis Beaudry, he met the singer Rosita del Vecchio, whom he was to marry 17 Jul 1866 and who bore him a son Jules in 1870. In the summer of 1865 he performed in Quebec City and several cities in Ontario (Ottawa, Kingston, Toronto, Hamilton, London) as well as in Detroit and in New York City and later that year gave other concerts in Quebec, the Maritime provinces, and the USA. In New York he was soloist 16 Dec 1865 in the 101st concert of the Philharmonic Orchestra.

Jéhin-Prume and his wife gave numerous concerts in Canada and the USA, including one at the White House in January 1867, and later they appeared in Cuba and Belgium. With the singer Carlotta Patti and the pianist Theodore Ritter they toured Canada and the USA 1869-70, giving 111 concerts in 59 cities.

With the fall of the Mexican Empire and the death of Maximilian (1867), and in view of his own marriage, Jéhin-Prume decided to settle in Montreal and become a Canadian citizen. He and his wife were to play a leading role in the development of musical life in Montreal.

In the early months of 1871 he gave 'six classical chamber concerts' at the Mechanics' Hall. With colleagues he performed quartets by Haydn, Mozart, Beethoven, and Mendelssohn, some overtures, and, on two occasions, Beethoven's Pastoral Symphony. He himself played concertos by Viotti, Mendelssohn, Beethoven, and Vieuxtemps. He became the friend and collaborator of Calixa Lavallée after 1875 and prepared the choir and served as concertmaster of a 58-piece orchestra for 18 memorable performances of Barbier's Jeanne d'Arc with Gounod's incidental music in 1877 featuring his wife in the title role, conducted by Lavallée. He was president of the AMQ 1877-8.

Remarriage and Brief Return to Europe

The untimely death of his wife 11 Feb 1881, a few days after giving birth to a child which did not survive, dealt the artist a heavy blow, according to contemporary sources. Nevertheless he was remarried 24 Mar 1882 to Hortense Leduc, a young singer. Following tours in Ontario, Quebec, New Brunswick, and Manitoba he went back to Europe in 1882 with his new wife, for a final tour of Belgium and France.The winter 1883-4 marked the birth of a second son, Gaston, of whom all trace has been lost.

In 1885 he returned to Montreal for good, to devote himself mainly to teaching. With several Montreal musicians, however, including his brother Erasme (also a violinist, b Spa 2 Jun 1845, d 1905), who had arrived in Canada in 1888, the violinist and violist Robert Gruenwald, the cellist Jean-Baptiste Dubois, and the pianist Maria Heynberg, he founded in 1892 the Association artistique de Montréal, the first professional chamber music society in Quebec. By its last concert, in May 1896, the association had presented a total of 31 events.

In addition to his many concerts in Quebec with Lavallée, Jéhin-Prume in 1877 had participated as concertmaster of the orchestra in the first concert of the Montreal Philharmonic Society and in 1887 had been soloist in the Mendelssohn Concerto with the same society. At the height of the Association artistique's success, Jéhin-Prume's health began to fail, and he was forced to reduce his activities. He gave his last public concert 16 May 1896 with Victoria Cartier. He nonetheless continued teaching until his death. Among his pupils were François Boucher, Alfred De Sève, Béatrice La Palme, and Émile Taranto.

Jéhin-Prume devoted himself zealously to composition. According to Une Vie d'artiste, whose author is presumed to be his first son, Jules, the list of his 'major' works comprises 88 opus numbers, stretching from 1857 to the year of his death. Many of his works are for violin, including two concertos (Opus 14 and 31), fantasias, polonaises, mazurkas, caprices, studies, a sonata with piano (Opus 64), and cadenzas for concertos by Viotti, Beethoven, and de Bériot. He also wrote songs and ballads for voice and piano, various isolated pieces and transcriptions, some choral works, and an Oratorio dédié à Léon XIII, composed in Nicolet, Que in 1885. Some works were published by Schott, but most remained in manuscript and have not survived. Of the 95 or so works that can be attributed to him, only about 20 are presently available. The National Library of Canada (now Library and Archives Canada) in 1977 acquired five manuscript compositions, four in his own hand. Other material about and relating to him can be found through their website and that of the BAnQ.

The Baker, Riemann, and Thompson dictionaries state that Jéhin-Prume was one of the teachers of Eugène Ysaÿe, but the latter's son, Antoine, who was the director of Les Éditions and La Fondation Eugène-Ysaÿe in Brussels, vigorously denied this claim in a letter to Gilles Potvin dated 28 Jan 1971.

Frantz Jéhin-Prume was the first musician of international reputation to choose Canada as his country of adoption, and he remains one of the most accomplished artists in the annals of Canadian music. Along with such colleagues as Calixa Lavallée, Dominique Ducharme, Maria Heynberg, R.-O. Pelletier, Guillaume Couture, and Paul Wiallard, he was one of the leaders of Quebec's artistic life. One of his friends was the poet Louis-Honoré Fréchette.

Endowed with a prodigious technique, he also was a musician of solid and refined taste. 'The one possible reproach,' wrote Frédéric Pelletier, 'is that he made concessions to the fashions of the day... But those who knew him intimately - and I am honoured to have been among them - recall how deeply artistic was the soul of this musician and how well he understood the glorious masters of his art'. In An Encyclopedia of the Violin (New York, London 1925; New York 1966), Alberto Bachmann wrote: 'He was endowed with a superb technique and a sweet, pure tone'.

Jéhin-Prume's son, Jules (b Montreal 17 Jun 1870, d New York 1947), studied elocution and singing in Europe but then pursued a career in medicine. He was a throat specialist and oculist in Paris and in Montreal. He was the author of a comedy, Si bémol, performed in 1901 at the Monument national, and a drama, Vitrix, premiered in 1902 at the Théâtre national.