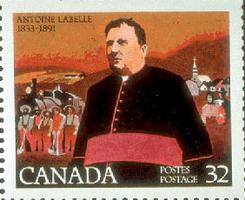 François-Xavier-Antoine Labelle, Roman Catholic priest (b at Ste-Rose, Qué 24 Nov 1833; d at Québec C 4 Jan 1891). One of the best-known and most popular figures in Québec at the time, Curé Labelle was instrumental in promoting colonization of the Ottawa Valley. Appointed parish priest of St-Jérôme de Terrebonne in 1868, he dreamed of a francophone and Catholic reconquest of northern Canada, from Montréal to Winnipeg, through the establishment of a chain of colonies. A remarkable orator and assiduous lobbyist in Québec City and Ottawa, the huge priest devoted most of his energy to the first stage of this project: the settlement and agricultural, commercial, mining and manufacturing development of the area northwest of Montréal.

An ardent supporter of building the CPR in 1872, he was sent as an envoy to Europe by the Canadian government in 1885 and the Québec government in 1890. In 1888 Premier Honoré MERCIER appointed him deputy minister of agriculture and colonization. Although Labelle encountered innumerable obstacles over the years and saw his most grandiose dreams crumble, he contributed to the establishment of some 20 parishes.