Hydraulic- or hydro-fracturing uses water (hydro), mixed with additives, and pumped at extremely high pressure into oil- or gas- bearing rock formations, to create minute fractures through which hydrocarbons can flow more easily than they would through solid rock. The effect has been described as similar to striking a windshield with a hammer: the layer of rock stays put, but it is webbed with small fissures. Oil wells “stimulated” this way produce 75 per cent more crude than untreated wells. The process is also routinely applied to release the gas held in shale (i.e., sedimentary rocks formed at the bottom of ancient water bodies and now widely distributed), and may need to happen multiple times before the well begins production. In the Horn River area of northeastern British Columbia, for example, wells have been fractured 20 or more times before natural gas is collected. In the latest hydrocarbon rush — beginning around 2005 — fracturing has made it feasible to release natural gas hidden in microscopic pores in rocks 50 times less permeable than solid concrete. More than 2.5 million wells have been fractured worldwide, and as many as 200,000 in Canada, more than three-quarters of which are in Alberta.

First demonstrated in 1947, fracturing has become more powerful and more precise over the decades. In the 1950s, the process employed pumps with less power than a pickup truck to push a few thousand litres of water and sand into the bottom of a vertical well. Today, the power of six train locomotives may be harnessed to drive 50 million litres of water at a time down a hole. Sophisticated additives make the water more slippery, prevent bacterial growth, or prop open the thousands of fissures — up to 3 mm wide and 100 m long — that open in the shattered rock more than a kilometre underground.

Fracturing became a game changer in the first decade of the 21st century when it began to be applied on a large scale in combination with another practice known as “horizontal drilling.” Horizontal drilling means that wells no longer go straight down through a layer of gas-bearing shale. Instead, the drill is turned sideways to run for kilometres through the middle of a deposit. Multiple wells drilled this way fan out underground like daisy petals, allowing companies to fracture hundreds of hectares of shale from a single wellpad.

Increasing precision in horizontal drilling, combined with advances in the technologies used to control the location of individual fractures, transformed the economics of shale gas recovery.

Political and business leaders in Canada and the United States herald the surge in natural gas supply. US leaders see a burgeoning domestic energy source that has reduced that country’s dependence on foreign oil and, in replacing coal as a fuel for generating electricity, lowered emissions of both ground-level and climate-changing pollutants. In Canada, Prime Minister Stephen Harper includes natural gas among the resource assets that make Canada an “energy superpower,” while British Columbia Premier Christy Clark has framed her province’s economic strategy around natural gas exports. Several provinces, including New Brunswick, issue permits for companies to explore for gas shales, while China, Poland, and other countries are exploiting shale deposits on their territories. The International Energy Agency has declared a new “golden age of gas.”

Industry’s rush to fracture shale for oil and gas has released large amounts of both to the North American market since the turn of the millennium. Previously worked-over fields in Texas and Alberta have been rejuvenated, and new ones developed in Ohio, Pennsylvania, North Dakota, and British Columbia. So much gas is now being recovered from fractured shales that persistent oversupply reduced North American prices for the commodity by half between the first and second decades of the new century. Oil produced using the technique in the US Plains has overwhelmed pipeline capacity, leading producers to ship it to market by rail (the runaway train that exploded in Lac Mégantic, Québec, in July 2013, was carrying oil from North Dakota’s Bakken Shale).

Companies that provide hydraulic fracturing services insist that the practice poses no threat to freshwater typically found less than 300 metres below the surface. Thousands of metres and layers of impermeable rock separate that groundwater from petroleum pay zones, leaving little chance that hydro-fracturing a deep shale formation will, by itself, contaminate a water well on the earth’s surface, most assessments suggest.

Nonetheless, critics found it troubling that companies were allowed to keep secret the identity of chemicals they mix with water in fracturing fluid. What had been merely a customary protection was formalized in the United States in 2005, when Vice President Richard (Dick) Cheney, who before his election was the chief executive officer of Halliburton Co., the world’s leading provider of hydro-fracturing services, exempted the practice from disclosure requirements in that country’s Safe Drinking Water Act. Researchers trying to penetrate industry secrecy, however, have identified hundreds of compounds in frac fluid samples that could potentially pose risks to human health.

Fracturing rock, moreover, is only a small part of the months-long, round-the-clock activity of drilling an oil or gas well, let alone the intense, years-long development of a major resource field. People living near active gas developments have complained of dizziness, headaches, rashes, nosebleeds, trouble concentrating and sleeping, as well as the noise and dust kicked up by heavy truck traffic. Ranchers have blamed livestock deaths on nearby fracturing operations. Seismologists suspect a link to earthquakes in places where waste frac liquids (more than half the mixture pumped into a well during a frac comes back up again afterwards) has been disposed of underground. Gasland, a 2010 documentary about the impact of gas developments on neighbours and communities, whose accuracy the industry challenges, was nominated for an Academy Award.

In 2011, biologist and former oil-field consultant Jessica Ernst sued Alberta’s energy regulator and Encana Corp., a Calgary-based gas company. She blamed them with lax oversight of shallow gas-well fractures near her home and for contaminating her well water with flammable gasses. Ernst backed her accusations with dramatic demonstrations of flame erupting from well water.

In October 2013, five police cars were set ablaze and 40 people arrested near Rexton, New Brunswick, during what was described as an “anti-fracking rally” and “shale gas protest” against gas exploration in the province. A month later, Canada’s largest private-sector union, UNIFOR (formerly the Canadian Auto Workers, and the Communications, Energy and Paperworkers Union of Canada), representing more than 300,000 members, called for a national moratorium on fracturing. The group’s concerns included chemical and gas pollution of groundwater, greenhouse gas emissions, the impact of oil and gas infrastructure (e.g., roads, pipelines and drill-pads) on landscapes, and worker safety under “gold rush” conditions.

The industry and its regulators have begun to respond to critics’ concerns. Service companies are turning to non-potable and recycled water instead of fresh, and phasing out toxic additives for others that are also used in hospitals, homes, and even as food additives. State and provincial regulators (in neither Canada nor the US do federal governments regulate hydro-fracturing) have required more disclosure of frac-fluid contents. Similarly, the Canadian Association of Petroleum Producers has released guidelines for fracturing companies, which include public disclosure of chemical ingredients.

Such improvements may do little to soften critics. Industry and regulatory sources concede that chemicals or gas can leak out when wells are improperly “cemented”— or sealed — at the top, allowing contaminants to reach the surface in the space between the steel well casing and the walls of a drilled hole. Pressure to keep costs down in an era of low gas prices — in part the ironic result of the glut of gas from other fracked wells — can encourage shortcuts. In addition, provincial and state agencies are seldom on-site to require best practices. With health, environmental, and safety concerns unresolved, provincial moratoria have been placed on fracturing in Québec and Newfoundland and Labrador. 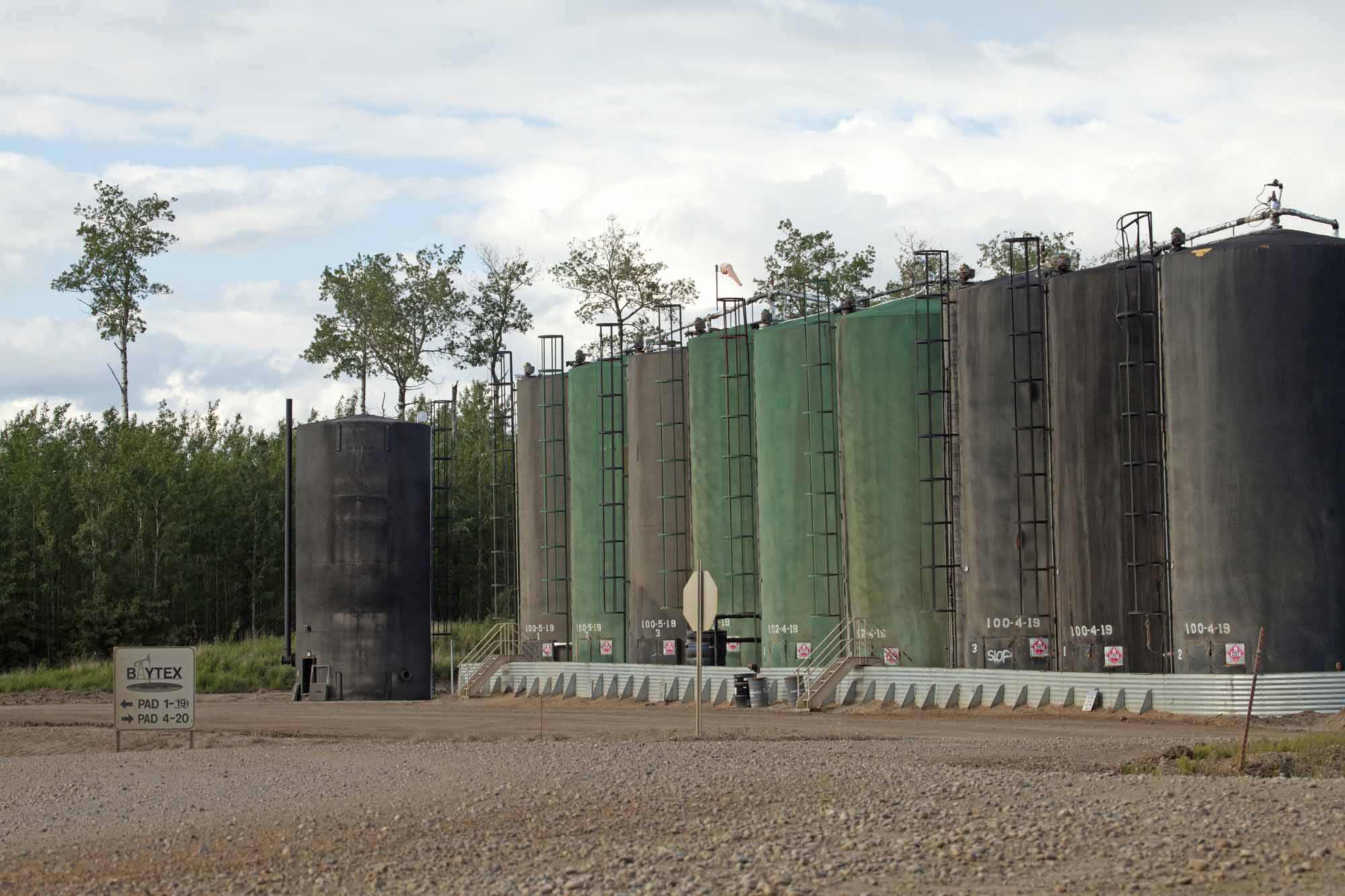