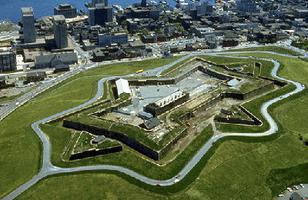 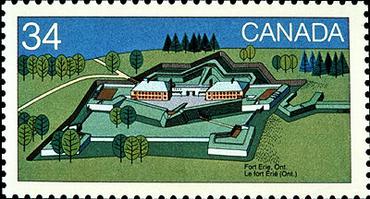 Fortification, a barrier thrown up between a defender and his assailant, its sophistication depending mainly upon the skills of the defender and the weapons available to the assailant, and whether the structure is permanent or a temporary defence. The earliest fortifications probably consisted of felled trees, interlaced thornbushes or stones rolled together. Fortifications of this type were built by the Huron and other Iroquoian groups before the arrival of the Europeans. Among Europeans these primitive forms eventually developed into walls of earth, timber, stone or baked brick.

Although the barrier posed by these walls was sometimes increased by setting a ditch below their outer faces, fortification did not progress beyond this rather simple conception until the 16th century. The chief reason for the lack of innovation is that the main agent of assault continued to be infantry, to which a good wall was a formidable barrier, while such infantry-support weapons as the battering ram or machines for throwing stones posed relatively little threat to solid walls. The technological breakthrough of the late 15th century was artillery, and the early modern revolution in fortification was a response to this new threat. Gunpowder first appeared in Europe in the 14th century, but it was not until the 15th century that tubes using it to launch projectiles were effective. From the late 15th century, when several Italian fortresses fell to French artillery, defensive designs changed rapidly.

Early modern fortresses used elements of medieval defences but builders covered them against artillery fire by sinking the complexes into the ground. A deep ditch in front of a low wall remained a barrier to infantry while offering a smaller target to artillery. The earth from the excavation was piled on the outer side of the ditch in a long slope which further reduced the target area of the wall and also slowed charging infantry. Although there were refinements, these were the basic elements of the new fortifications, and the star-shaped designs of the central complex allowed every point of the fortified perimeter to be swept by the defenders' guns.

Both medieval and early modern fortification styles were built in Canada, the choice depending upon whether a place would have to face artillery. Artillery was used only by Europeans, and - because of the cumbersome nature of early guns - the only fortifications built for defence against artillery were normally those near water transportation routes accessible to Europeans. Thus, the Port-Royal habitation built by Champlain in 1605 in Acadia - the earliest European fortification in America N of the Spanish settlements - is but a few connected buildings huddled around a court, presenting solid blank walls on the outside. However, the small complex is embellished with a little walled battery for light guns facing the water. Champlain built a similar structure at Québec in 1608. The choice of style was determined more by location than by the period during which construction took place: simple palisaded strongpoints were constructed well into the 19th century in the West, whereas Louisbourg, built on Cape Breton Island in the second quarter of the 18th century, is the most highly developed example of early modern fortification in North America.

In New France most forts were built on the Lake Champlain-Richelieu River invasion route (see Fort Chambly), although fortified trading posts were built deep in the interior (see Fort Duquesne); later, in Upper Canada, the focus was on the threatened Niagara frontier (see Niagara Historic Frontier). Around 1800 the British built high, round stone towers to strengthen the ports of Halifax and Saint John (see Martello Tower). In the Northwest, simple wooden palisades sufficed except at Prince of Wales Fort on Hudson Bay and at Upper and Lower Fort Garry (see Fort Garry, Lower and Fort Garry, Upper) on the Red River, where stone walls were built as protection against attack.

The War of 1812 ended in a stalemate, thanks in part to British naval power on the Atlantic and Lake Ontario, and the Rush-Bagot Agreement of 1817 severely limited warships on the Great Lakes and Lake Champlain. Because the US, with a 10-to-one population advantage over British North America, had a greater potential to build ships in the interior, the British government built the Rideau Canal so that gunboats could be rushed from the Atlantic to vital Lake Ontario; and elaborate stone forts in sunken star-shaped patterns were built at Kingston [Fort Henry], where the Rideau Canal would reach Lake Ontario, at Île-aux-Noix where the Richelieu River flows out of Lake Champlain, at oft-besieged Québec City (see Québec Citadel) and at Halifax, the Royal Navy's North American base (see Halifax Citadel).

A technological revolution in warfare in the mid-19th century upset long-established assumptions about the relative strengths of attack and defence. Ironclad enemy steamships, firing conical shells from rifled cannon, might suddenly destroy the Royal Navy in its bases. Britain reacted by overstressing coast defences, first at Portsmouth and Plymouth and then in British North America. When the American Civil War briefly renewed the possibility of war with the US, the British government undertook major new forts in Bermuda and Halifax and at Lévis, opposite Québec City.

With a half dozen new batteries, Halifax harbour was fortified on a scale to resist the combined fleets of the world. An example shows the rapid evolution of the fort-maker's art. In the early 1860s the lower (and thus more vulnerable) battery on Georges Island was remodelled to give its rifled, muzzle-loading cannon protection behind iron-shielded, stone portholes in thick earthworks. In the late 1880s York Redoubt's guns were remounted in circular concrete pits to permit all-round fire and placed behind gently sloped parapets designed to deflect, rather than to resist, incoming shells. In the early 1890s Halifax began the changeover to breech-loading guns, and a complete rearmament took place 1898-1906.

In 1905-06 the Canadian government took over the British fort at Halifax and a similarly defended one at Esquimalt, BC. As the 20th century progressed, the range of artillery batteries became but one element in an integrated harbour-defence system which included mines, submarine nets and aircraft. During WWII Canada built a new system of modern coastal forts at Esquimalt, Prince Rupert, Vancouver, Halifax, Sydney, Saint John and a number of Newfoundland ports. Since WWII self-propelled missiles and atomic warheads have created a technological revolution necessitating another reappraisal of techniques of defence.