Fort Amherstburg and the War of 1812 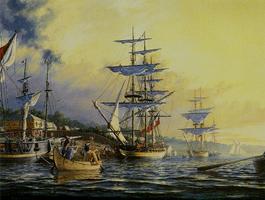 Britain's Upper Lakes Naval Base just before the Battle of Lake Erie. In the midst of supply shortages, the crew of the new flagship HMS Detroit is seen fitting a sail borrowed from the HMS Queen Charlotte anchored on the right. After their defeat on the Lake, the British abandoned this site, and located their new Upper Lakes naval base at Penetanguishene, on Lake Huron (\u0093Sunset at the Amherstburg Navy Yard\u0094 by Peter Rindlisbacher).

A key site for controlling the western theatre of the War of 1812, Fort Amherstburg (now Fort Malden) owed its existence to the shifting boundaries on Lake Superior in the wake of British and American diplomatic and military disputes. Before 1796, Detroit had been Britain's chief outpost on the economically valuable west end of the Great Lakes. Fur trading had made the area a hub of activity for both American and British interests. But in 1794, the British and American authorities signed Jay's Treaty and Detroit was surrendered to the Americans.

To prepare for this contingency, the British had begun construction of a new fort to protect their interests. A survey of the land where the Detroit River emptied into Lake Erie was conducted in 1788. Strategically, a fort here would command both channels, and was easily made into a dock and wharf for moving trade. As there were few land routes available north of the lake, the waterways of the Great Lakes were integral to moving material and information. In short, they were the main vein of logistics and data for the region.

The Royal Engineers began construction in 1796 and by 1804 most of the fort's key buildings and defences were in place. The diamond-shaped corners were armed with four cannons each. The perimeter was 900 metres. The main gate was also protected by additional defences, including an earthwork known as a ravelin, which acted as a shield and was protected by four cannons. Surrounding the structure was a dry ditch to forestall invaders.

Fort Amherstburg was multifunctional: it served the military as home of the garrison; it served the economy of the territory as a key port of trade on the Great Lakes; and it housed the headquarters of the Indian Department to deal with First Nations concerns and British interests. It also included the King's Navy Yard, run by the Provincial Marine. The Yard produced a variety of vessels, including the brig General Hunter, the ship Queen Charlotte, the schooner Lady Prevost, and the ship Detroit.

It was from Fort Amherstburg that Britain launched its first major victory of the War of 1812. The American vessel Cuyahoga, filled with men and material as part of General William Hull's North West Army, sailed close to the fort on 2 July 1812, unaware that war had been declared. Lieutenant-Colonel Thomas St. George, who commanded the fort, dispatched the provincial marines and First Nations warriors under Lieutenant Frederick Rolette to take the American vessel. The Cuyahoga was boarded and its crew seized, but the stunning prize lay below decks: all of General Hull's private papers, including notes on his coming offensive against Amherstburg. With this valuable intelligence, the forces at Amherstburg prepared for their assault, and the information would be critical to the offensive of Major General Isaac Brock at Detroit. Hull's 2500 men marched on Amherstburg, making short work of the Essex Militia before stopping. Concerned about his exposed supply lines and worried he did not have enough artillery to make a proper siege, Hull called off the advance. The British rallied with harassing action on Hull's supply lines with great success.

With Hull abandoning his initiative, Amherstburg became the scene of the war planning of the two great captains of the war: Brock, and the Shawnee chief Tecumseh. Safe within the walls of the fort, they sketched the plan to take Fort Detroit, the first decisive victory for the British in the war.

But doom lay in wait for Amherstburg as the Americans rebounded to a stunning victory in the Battle of Lake Erie in 1813. With American control of the lake, the British position at Amherstburg was dicey and the order was given to burn the fort and retreat. The guns were spiked and the buildings set aflame. The Americans would rebuild on the ashes, calling it Fort Malden, but in the wake of the war it returned to British hands where it played a role in the Rebellions of 1837.