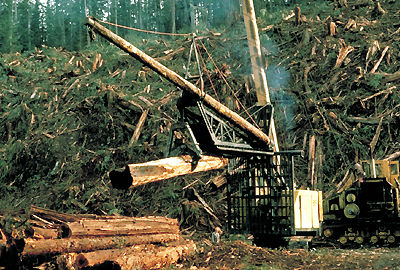 Mechanical felling machines mounted on tractors or excavators, which direct or bunch the tree, are used to fell trees up to 80 cm in diameter (photo by Thomas Kitchin).\n

Forest harvesting involves cutting trees and delivering them to sawmills, pulp mills and other wood-processing plants. Its practical components include road construction, logging and log transportation. Years of planning go into deciding when and which parts of the forest will be harvested and how this will occur, all to ensure that these activities are carried out in a manner consistent with protecting social and environmental values. The specifics of forest harvesting in Canada depend on the region and type of forest. (See also Forestry; Lumber and Wood Industries; Pulp and Paper Industry; Timber Trade History; Lumberjacks.)

In general, two very different systems of forest harvesting are employed in Canada, reflecting the country’s distinct woodlands. The temperate rain forest on the country’s Pacific coast is unique and is generally logged for high-value, large-diameter trees, such as western red cedar. These specimens are often taken out in a highly selective manner, which usually entails expensive harvesting operations. In the rest of Canada’s forests, namely, east of British Columbia’s coastal mountains, it is generally much cheaper to cut trees on a commercial basis. This is the case even when hardwoods (such as yellow birch, red oak and sugar maple) are the species being extracted in the mixed forests that dominate the southern parts of Ontario, Québec and the Maritimes.

Whereas a century ago forest harvesting was driven almost entirely by economic considerations, factors in addition to economics determine how it is conducted today. The main goal of planning forest harvesting operations is to cut the oldest wood first. In addition, industries that require timber are interested in procuring their wood supplies as cheaply as possible. They are able to determine how to meet these two requirements by reviewing forest inventory data that identifies different species and their age and is updated continually.

By the same token, the provincial governments that control most of the land on which forest harvesters operate oblige them to conduct their activities according to a long list of regulations, the most important of which are environmental. Although these conditions vary across the country, in general they compel parties who cut timber to plan their operations far in advance. In doing so, the foresters who draw up these designs are legally required to respect a number of ecological values. Typically, these include leaving buffers (i.e., uncut areas) around places that are considered sensitive (often termed “areas of concern” or AOC) in order to protect them. An AOC can include things such as an osprey’s nest, areas in which moose overwinter and fish-breeding grounds. In addition, forest-harvesting plans usually protect trees that can serve as habitat for wildlife and ensure that the forest is cut in a way that mimics, as closely as possible, a natural disturbance (e.g. fire or a blowdown).

Forest-harvesting plans must also incorporate measures that protect a number of other values. Like environmental protections, these vary across the country, but there are some common themes. Heritage sites, such as old logging camps and areas historically used by Aboriginal people, are often off limits to the tree cutters. The same is true of forested tracts that are valued for recreation. Consequently, regulations often prevent timber harvesting near or around things such as summer cottages and lodges, snowmobile trails, and canoe portages.

The planning process is crucial to forest harvesting in the 21st century. It is intended to allow all stakeholders in a particular forest ample opportunity to voice their views on the plan for cutting. This element in the process was embraced by many provincial governments across Canada after the rise of the environmental movement in the late 1960s and early 1970s in the hope that doing so would minimize conflicts in the woods.

In order to access the trees that are scheduled to be cut, the Canadian forest industry builds thousands of kilometres of logging roads each year. In doing so, professional foresters must balance two conflicting social desires. On the one hand, advocates of wilderness areas push for the forest to remain roadless (i.e., inaccessible to motorized vehicles). On the other hand, certain recreational groups — such as hunters and fisherpersons — are keen to increase the ease with which they are able to access the woods. In any event, many of the kilometres of roads that are built to facilitate timber harvesting are merely temporary winter snow roads and unsurfaced summer roads.

All these roads require planning and surveying. They must be constructed to minimize erosion, protect water quality and cause the least impact on the forest growing site. Permanent roads must be surfaced for all-weather traffic and often include bridges, culverts and ditches

Forest harvesting is carried out using a handful of cutting methods. These range from single-tree selection to clear-cutting. A system of individual tree selection is typically used to thin an overstocked immature forest, to cut hardwood or other species which grow in shade, and to retain the cover along streams and on dry, south-facing areas exposed to the direct sun. 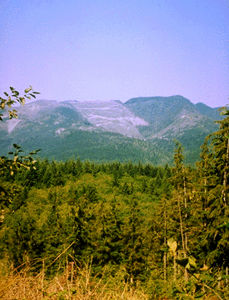 At the other end of the spectrum is clear-cutting, which is commonly practised in forests that have not previously been harvested on a commercial basis. It requires the least amount of initial road construction, permits loggers to concentrate their operations (minimizing costs) and enables foresters to systematically prepare sites and engage in reforestation after cutting. However, large cutover areas are unpopular with the public because they are perceived as being aesthetically unpleasing. As a result, increasingly, irregular-shaped patches of the forest are harvested. This requires more initial road construction and exposes more fringe trees to wind damage. Nevertheless, provincial cutting regulations often require professional foresters to include a certain number of large cutover areas in their plans in an effort to reproduce the conditions created by natural disturbances in certain forest regions. Patch-cutting is normally used for harvesting successive crops from a planted forest.

Even though technology has dramatically improved safety, felling trees remains one of the most dangerous professions in the world. Felling machines using chainsaws or circular saws mounted on tractors or excavators are frequently employed east of the coastal mountains. So, too, are multi-function tree harvesters that are able to cut, limb, and top the trees, then then move them to the roadside, or perform any combination of these functions. Mechanical felling is safer than chainsaw felling, but the machines are expensive and operate best where large numbers of trees can be cut in one location. Hand-held chainsaws are still widely used today, although they are most commonly found on operations that are harvesting high-value, large-diameter trees.

Skidding involves dragging logs or trees to the roadside with a horse, wheel skidder or tractor. Horses and farm tractors are still used on small, private woodlots, but articulated, centre-steering wheel skidders (developed in the 1950s) are used on practically all commercial forest-harvesting operations. In order to minimize damage (i.e., rutting) in the forest, skidders are often equipped with high-flotation tires. Alternatively, sensitive sites can be harvested in the winter, east of the coastal mountains, when the ground is frozen and therefore protected. 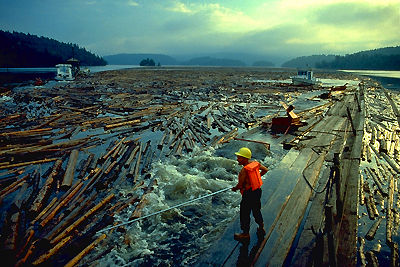 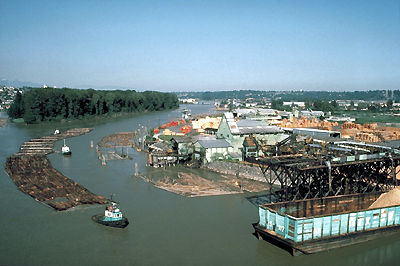 Tugs with booms pass the sawmill on Annacis Island, BC (photo by Thomas Kitchin). 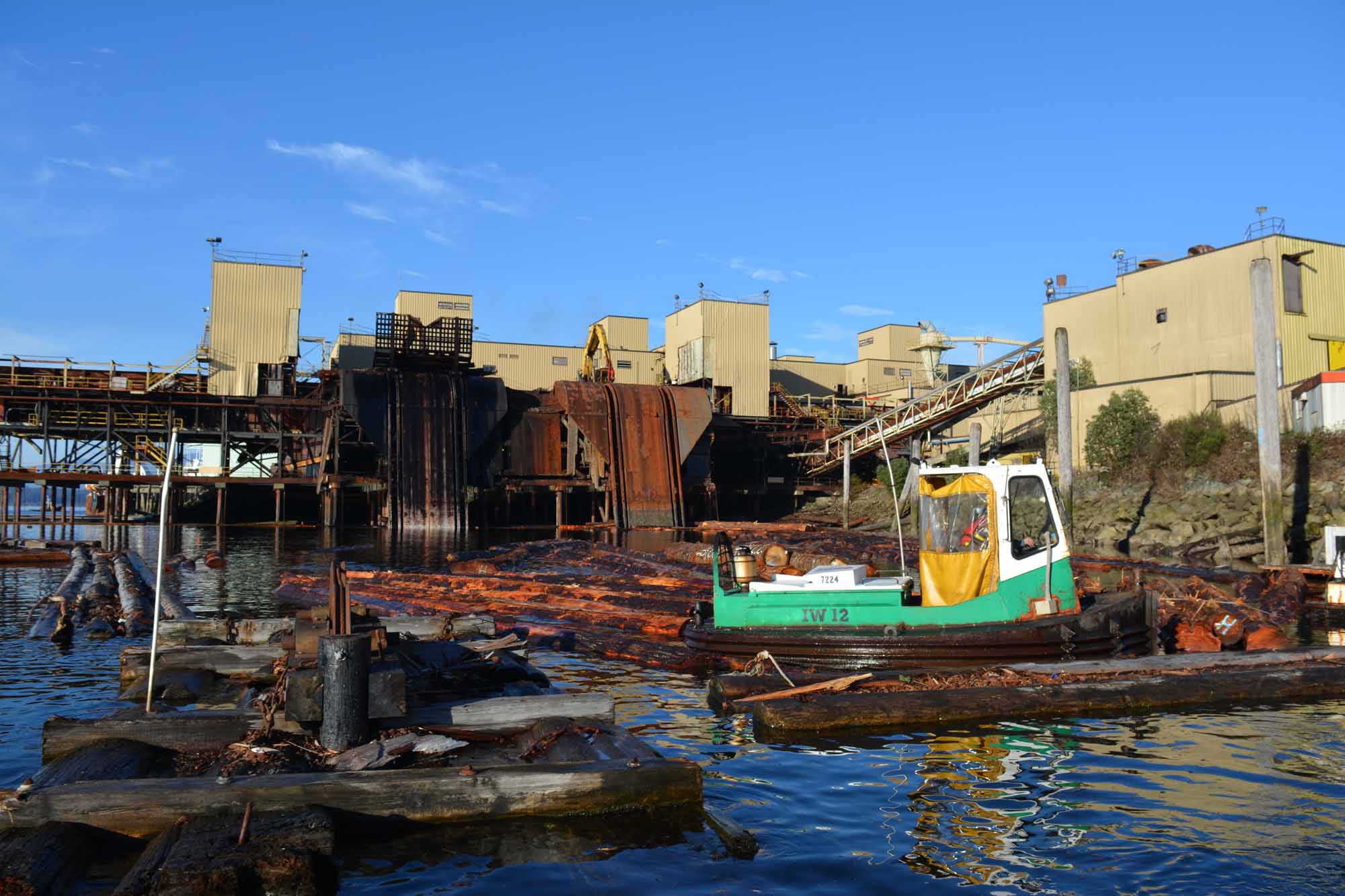 The manner in which logs are transported from the forest to the mills depends on location. Along British Columbia’s coast water transport is common. The logs are either formed into rafts or loaded onto barges, then towed or piloted to the mills. By contrast, in the rest of Canada, trees are almost always moved by truck (and occasionally by rail).