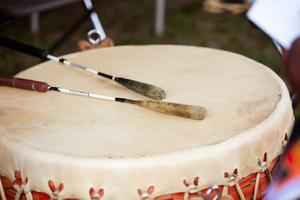 Indigenous people (First Nations, Inuit, Métis) who reside in what is now Canada have diverse cultural traditions that are reflected in the variety of their musical genres and styles. Music is generally seen as an integral part of the daily life and spiritual beliefs of Indigenous people in Canada. The diversity of Indigenouslife and music in Canada has been recognized by scholars who attempted to classify people according to "culture areas," which were also applied to music made by people in each area. Indigenous people have their own distinct musical traditions, repertoire, and meanings. As well, genres of music have emerged that traverse boundaries and are performed by Indigenous musicians across North America. Some generalizations are that traditional Indigenous music is predominantly vocal, with drums, rattles and flutes serving as common instruments. As well, Indigenous musicians have been influenced by non-Indigenous music-making, often adopting other musical styles (such as country music and pop) and instruments (guitars, fiddles).

Despite varying influences from non-Indigenous people, most Indigenous groups in Canada have retained nation-specific musical traditions. Traditional music is often subdivided into social music and ceremonial music, a division that is often paralleled with a public or private performance context. Social music primarily consists of songs that are accompanied by drums and rattles, and which may accompany stylized dances that are performed for gatherings and celebrations, some of which are closely tied to the traditions of a community. Ceremonial music, such as songs sung for sweat lodges, sun dances and Midewiwin ceremonies, is also primarily vocal music with percussive accompaniment, and certain songs are sung for specific parts of a ceremony and may only be performed in the context of that ceremony. Ceremonial music is seen as sacred, and is thus not usually performed in an improper context or for public consumption.

There are two sources for most songs in Indigenous cultures: those that are created or composed by an individual; and those that are received by an individual in a dream or a vision. Songs are typically passed on from one person to the next through oral transmission; although accessible recording technology and the proliferation of commercially produced albums have changed the traditional means of song-sharing and have accelerated the sharing of songs and traditions between Indigenous groups.

Songs are often short, but they may be repeated a number of times during a performance. Singing style varies according to the singers and stylistic preferences of different nations. Most songs have a single melody that an individual or a group sings simultaneously, and specific singing roles are often assigned to women and men. Songs may use words in an Indigenous language or in English or French. They may make exclusive use of vocables (syllables that do not translate to a specific word), or they may use text and vocables in combination. Songs serve a specific purpose and have a particular meaning, and therefore tend to be performed in a designated context.

The drums, rattles and flutes that are used to accompany traditional music are often hand-made, constructed from materials from the local environment, including seeds, tree parts and animals parts. Instruments are often considered animate objects and are therefore treated respectfully and are often given gifts of sacred plants. Likewise, during construction certain rituals may be performed on the instruments, and they may be decorated with symbolic images and colours.

Traditional music is performed for community audiences, while powwows and festivals that feature Indigenous music, dancing and traditions, are open to the non-Indigenous public. These gatherings may include stylized music, dance and clothing, and may also often showcase specific traditions of the hosting community.

Community powwows mainly take place on summer weekends, and people travel a "powwow circuit" to participate and visit with family and friends. Powwows in urban centres, hosted by educational institutions and urban Indigenous organizations, are held throughout the year. Powwows are imbued with symbolic meanings, and special ceremonies and dances are often held to commemorate individuals or to show respect for traditional customs. The music, dancing and dance outfits worn by powwow dancers are stylized and continue to evolve, with new songs and new dance movements introduced each summer. The songs that are performed are typically sung by men, who sit around and strike in unison a large bass drum turned on its side, with women serving in a supportive capacity as back-up singers. The songs are short in length but are repeated four or more times, with overlapping entries that give a continuous sound from one song repetition to the next. Songs are often pitched at the upper extreme end of the singers' range, with an overall descending contour through the duration of the song. The drumming patterns are intricately related to the dance steps and are generally one of three patterns: an even steady beat, a long-short pattern, or a steady beat alternating with a drum tremolo pattern.

The music that has emerged from Indigenous communities is as diverse as the people themselves and has a wide appeal to listeners of various musical genres. Many Indigenous musicians have been influenced by non-Indigenous music, creating their own works in other music styles and genres. In some instances they incorporate texts, narratives, instruments and singing styles that reflect their Indigeneity, whereas other times musicians create music that is not identifiably Indigenous. The recognition of Indigenous popular music genres corresponded with increased awareness of Indigenous social issues by non-Indigenous people in the 1960s and 1970s.

Especially in the 21st century, social commentary has become a feature of some Indigenous popular music. War Party, a rap group from Hobbema, Alberta, used their lyrics to address life on the reserve from the perspective of Indigenous youth. Ottawa-based A Tribe Called Red use their powwow-inspired dance music to counter the appropriation, subjugation and diminishment of Indigenous people in popular culture.

Tanya Tagaq, an Inuit throat singer from Ikaluktuutiak (Cambridge Bay, Nunavut) won the Polaris Music Prize in 2014 for her album, Animism, which combines her traditionally-inspired throat-singing with other musical expressions. The album is overtly political. Tagaq’s song “Fracking” is meant to mimic the environmental damage caused by hydraulic fracking, taking aim at the industry and its supporters.

Beginning in the mid-1970s, various organizations in Canada experimented with communications technology and produced original Indigenous programming. With support from within Indigenous communities and audiences and government funding, communities throughout Canada formed radio stations, airing Indigenous-produced programs that highlighted Indigenous music and culture. Indigenous-owned and operated radio stations, such as CKRZ 100.3 FM in Brantford, Ontario, produce programs that showcase musicians from the local community as well as artists from other regions in North America.

In 1998, Native Communications Incorporated (NCI), a publicly broadcast radio station in Manitoba, began airing a Top 10 playlist of music by Indigenous artists. In 1999, the playlist evolved into an hour-long program featuring Indigenous music from across North America, and in 2000 it was expanded into a two-hour program called The National Aboriginal Top Thirty Countdown. The program was broadcast nationally beginning in 2008, when the Western Association of Aboriginal Broadcasters (WAAB) was formed to unite the interests of provincial Indigenous broadcasters. In 2010, the program was renamed The National Aboriginal Music Countdown; the structure was changed to a Top-40 format that included Indigenous music from across North America, Australia and New Zealand, and a website was launched to publish the weekly lists online.

Several national, annual events take place which showcase the diverse contemporary music-making of Indigenous peoples from across Canada. The Indigenous Music Awards (IMA), formerly the Aboriginal Peoples Choice Music Awards, highlight the vitality, importance and currency of Indigenous music in Canada. The awards program recognizes the variety of genres in which artists are performing, as well as the producers and designers of the recordings. Aboriginal Music Week, held annually in Winnipeg since 2009, is a summer music festival that presents Native, Métis, Inuit, and Indigenous artists performing a wide variety of musical genres.