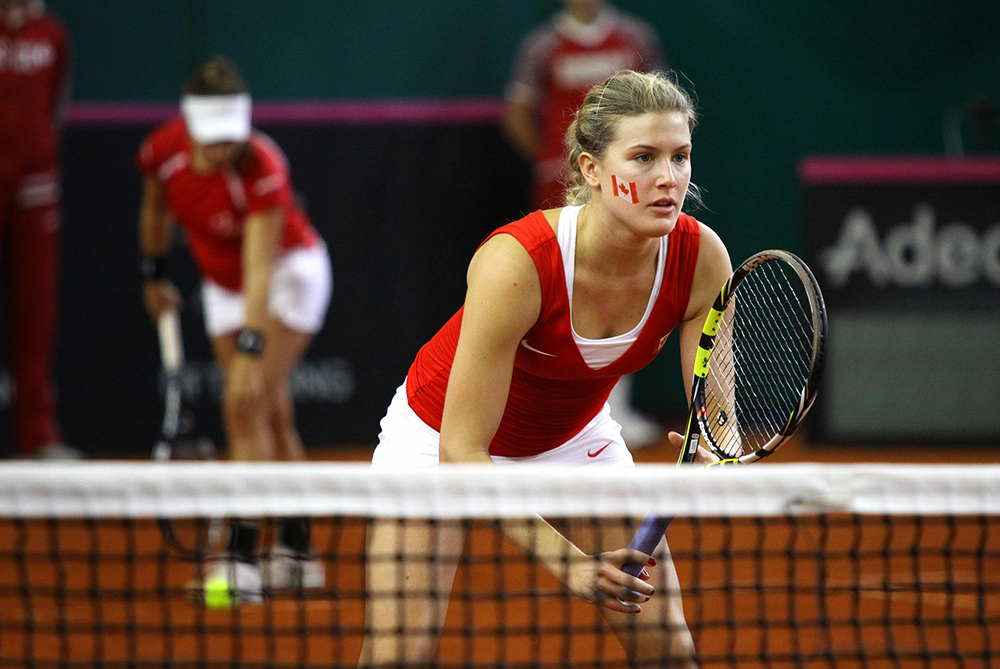 KYIV, UKRAINE - APRIL 21, 2013: Eugenie Bouchard (on the foreground) and Sharon Fichman of Canada in action during BNP Paribas FedCup pair game against Lesia Tsurenko and Elina Svitolina of Ukraine on April 21, 2013 in Kyiv, Ukraine. Photo taken on: April 21st, 2013

Eugenie Bouchard is one of four children of Michel Bouchard and Julie Leclair. She has a twin sister Beatrice and two younger siblings, Charlotte and William. The children grew up in the Westmount neighbourhood of Montréal, where they lived on the same street as former Canadian Prime Minister Brian Mulroney.

At age five, both Eugenie and Beatrice started tennis lessons. While Beatrice quit within a year, Eugenie loved it. When she was six, Eugenie began working with coach Zdenek Bukal at the Nun’s Island Tennis Centre in Verdun, Québec. She also attended the Westmount private girls’ school called “The Study,” where her strongest classes were math and science.

Bouchard was highly disciplined, committed to her sport and her studies. According to her mother, “Genie had this competitive streak and was never satisfied, she just always wanted to hit more balls…She’d come home from school and I’d still be closing the front door and she’d already be in her room doing her homework.”

In 2004, at age nine, Bouchard competed at the Open Super 12 tennis tournament in Auray, France. She had qualified for the tournament by winning an event in Montréal. Her doubles partner for the event was Laura Robson, who would go on to have a successful professional tennis career representing Great Britain. According to Bouchard, the 2004 Open Super 12 tournament “really opened my eyes about what I could do. It was the first time I had ever left North America and I was doing it to go play tennis because I earned my way there. In France, I realized I want to travel the world and play tennis as a career.”

When Bouchard was 11 years old, she met Sylvain Bruneau, then head coach of Tennis Canada’s national women’s team. “I was already impressed, especially by her maturity and work ethic,” Bruneau later told Montréal Ensanté Magazine in 2014. 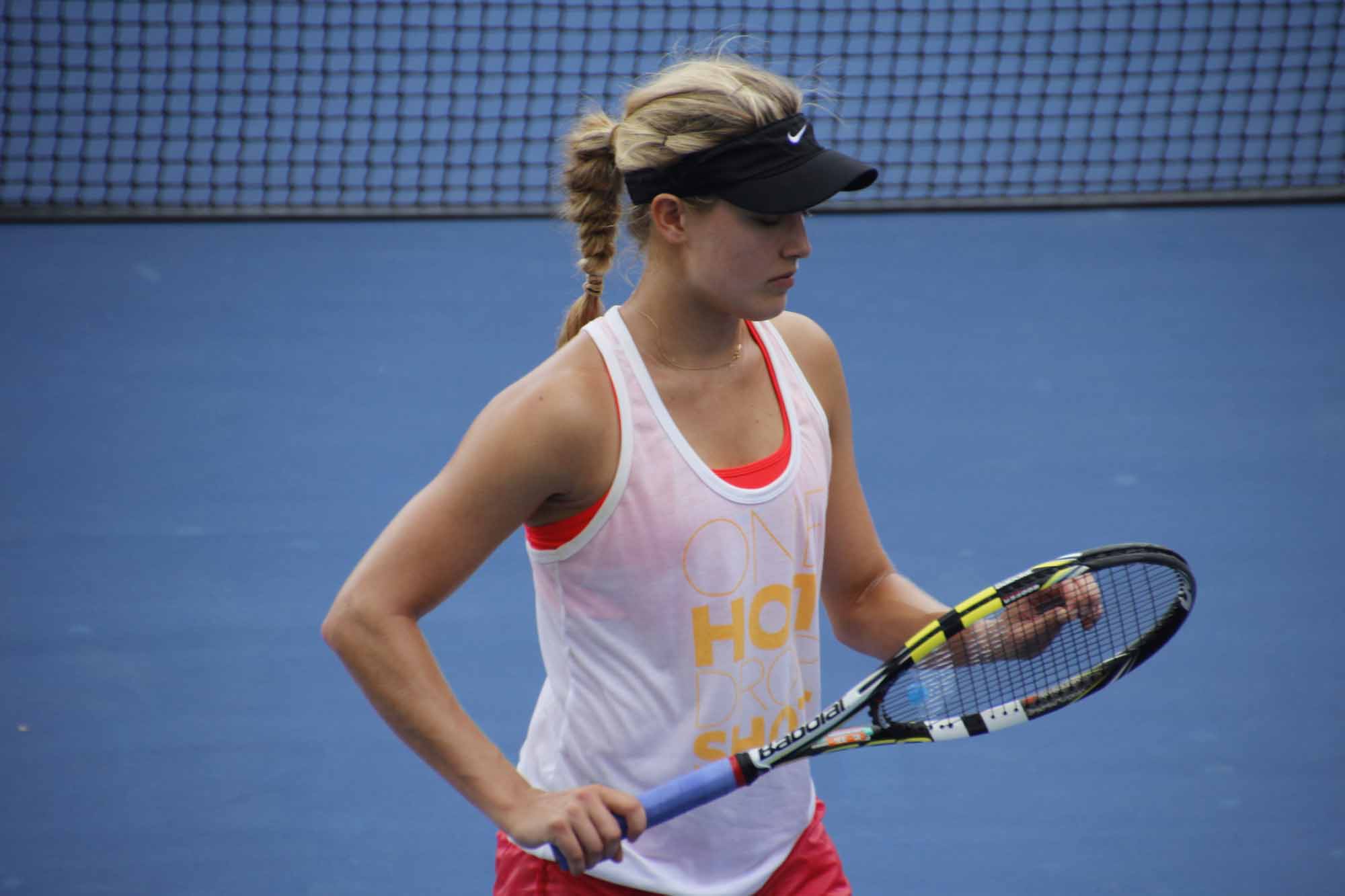 Tennis champion Eugenie Bouchard during a practice session at the 2014 US Open. Photo taken on: August 22, 2014

When she was 12, Bouchard moved with her family to Florida to train at the High Performance Tennis Academy with Nick Saviano, who was also coaching Briton Laura Robson and American Sloane Stephens. According to Bouchard, the move really benefitted her development as a tennis player.

“It was a good move for my career because tennis isn’t as big in Montréal as in Florida,” Bouchard told the Sun Sentinel in 2014. “[In Montréal] I had to play indoors all the time and the variety of players wasn’t great.”

In 2009, 15-year-old Bouchard moved back to Montréal accompanied by her coach, Nick Saviano. She trained at the Tennis Canada National Training Centre, which had opened in 2007. Bouchard’s tournament victories in 2009 included the Canadian Under-18 Indoor Championship in Toronto, the Pan American Closed ITF Championship in Tulsa, Oklahoma, and the Loy Yang Traralgon International doubles tournament in Australia, which she won with Thailand’s Luksika Kumkhum.

In March 2010, Bouchard won an ITF women’s junior singles tournament at the Uruguay Bowl in Montevideo, Uruguay, defeating Ulrikke Eikeri of Norway in the final, 6–7, 6–3, 6–1. She also teamed up with Eikeri to win the Uruguay Bowl junior girls’ doubles title.

Success on the Junior and Professional Circuits (2011)

In 2011, Bouchard won her first victories on the ITF professional circuit and the WTA Tour, while continuing to win matches at the junior level.

Bouchard also had two victories on the ITF professional circuit in 2011. On 5 February, she beat Saisai Zheng of China 6–4, 6–3 in Burnie, Australia, and on 10 April, she defeated Jessica Ginier of France 6–2, 6–0 in Sibenik, Croatia.

She also won her first career match on the WTA Tour in 2011, defeating Alison Riske of Pittsburgh, Pennsylvania, 6–3, 6–2 in the first round of the 2011 Citi Open in College Park, Maryland. 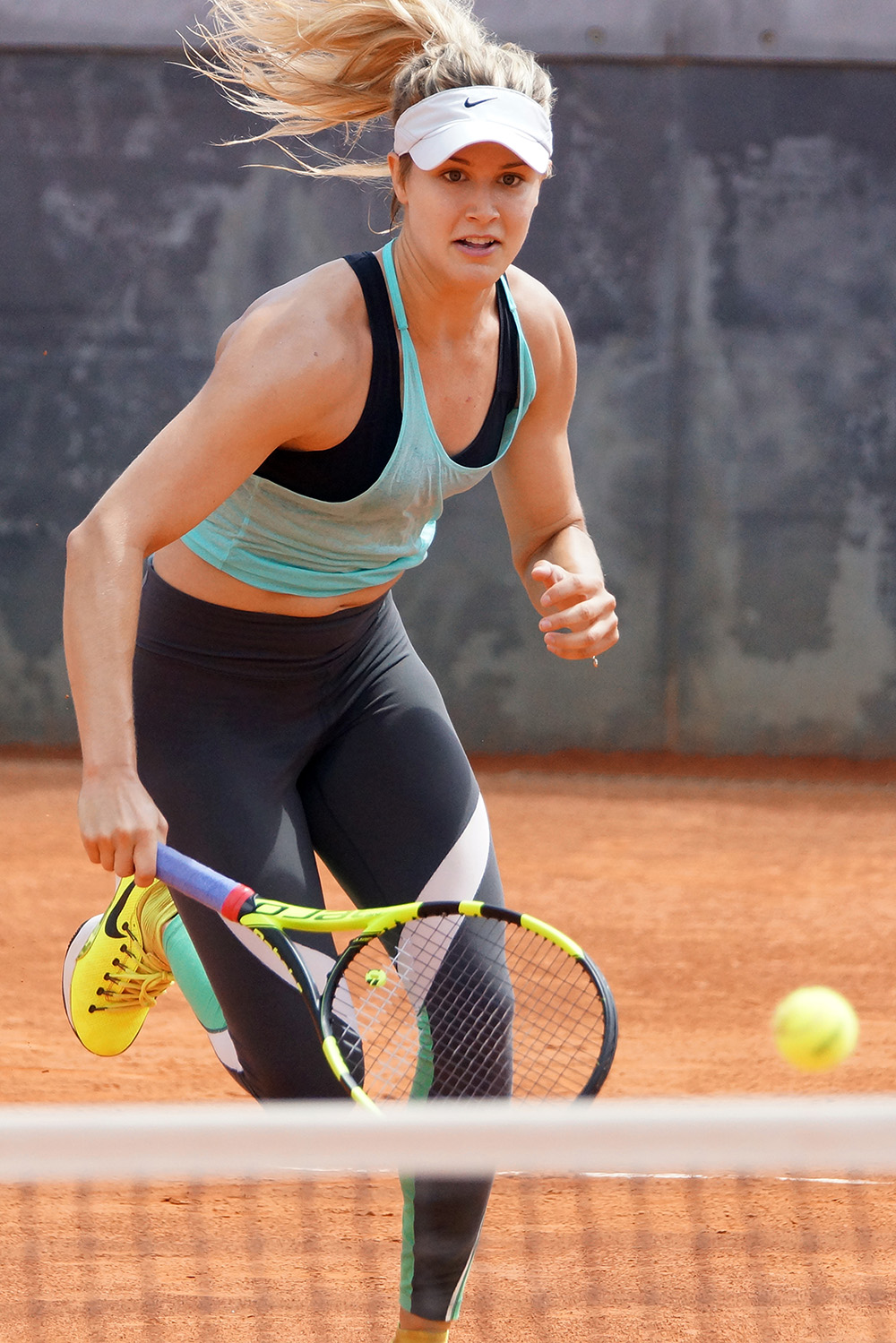 Bouchard also won four ITF events in 2012 — two in Sweden and two in Canada (beating Stephanie Dubois of Laval, Québec, in July and Sharon Fichman of Toronto, Ontario, in November).

On the WTA Tour, Bouchard advanced to the quarterfinals of the Citi Open and recorded her first career win at the Rogers Cup, defeating Shahar Peer of Israel in the first round in Montréal. At the end of the season, Bouchard was named Tennis Québec’s top athlete. It would be the first of four consecutive years that Bouchard would win the award.

In 2013, Bouchard participated in the WTA Tour full-time. The highlight of her season came in October, when she advanced to the final of the Japan Open in Osaka (she lost to Samantha Stosur of Australia).

Bouchard also advanced to the semi-finals of Strasbourg, France, and Québec City, and won three singles matches in the Grand Slam events. She defeated former French Open champion Ana Ivanovic in the second round of Wimbledon and former Wimbledon semi-finalist Tsvetana Pironkova of Bulgaria in the first round of the French Open.

At the end of the season, Bouchard was named the WTA Newcomer of the Year and received the Bobbie Rosenfeld Award, which is presented to Canada’s top female athlete of the year. She moved from 144th to 32nd in the WTA world rankings.

At Wimbledon 2014, Bouchard became the first Canadian singles tennis player to reach the final of a senior grand slam event. (Although Canadian-born Mary Pierce reached the final of the French Open in 1994, she represented France her entire career; similarly, Canadian-born Greg Rusedski reached the final of the US Open in 1997, but represented Britain at the time). Although Bouchard lost to Petra Kvitova 6-3, 6-0 at Wimbledon 2014, in the process she made Canadian sports history. The final drew a huge television audience: more than 3.6 million viewers tuned in to watch at least part of the match on TSN or RDS, with a peak audience of 1.7 million in the final minutes. 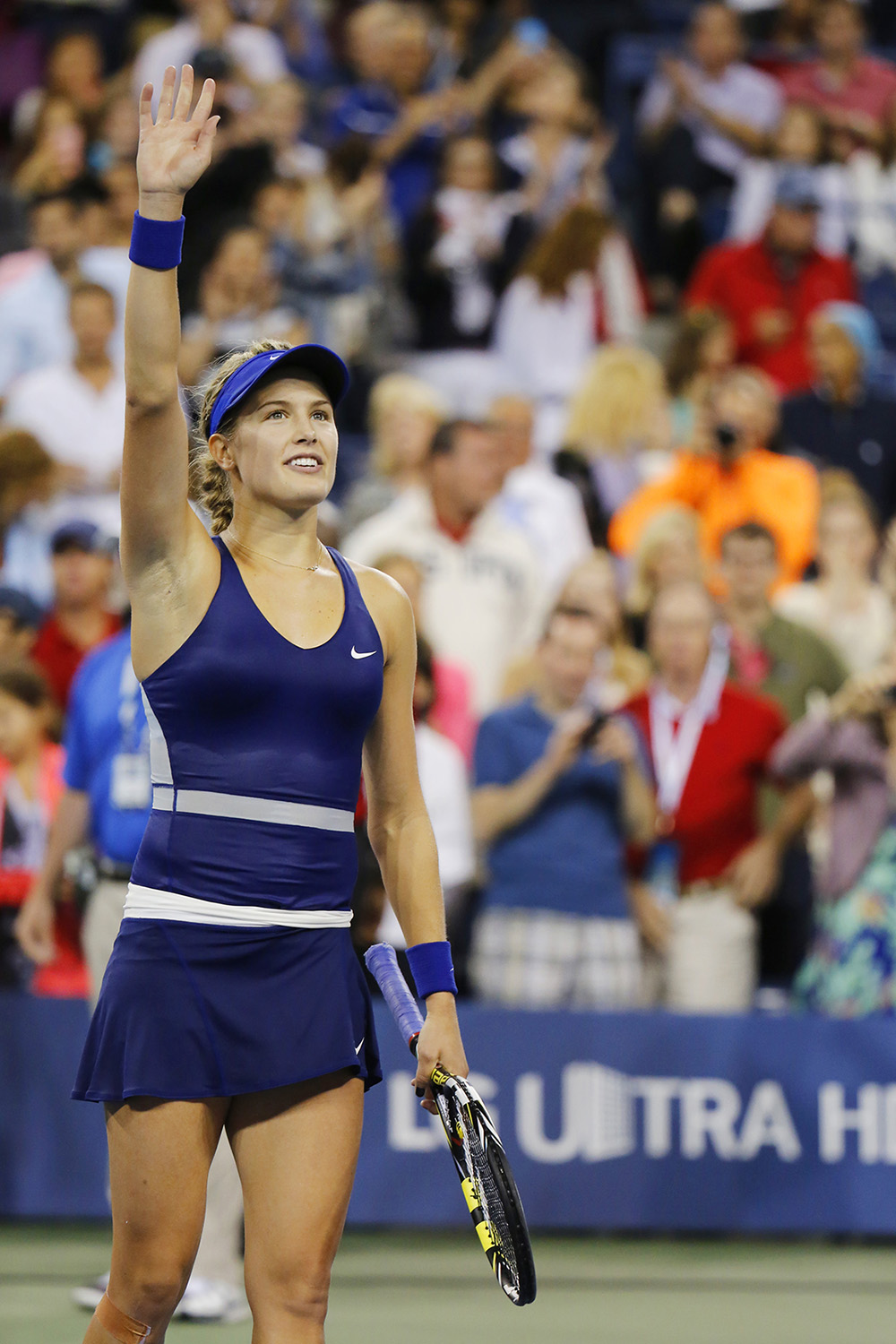 On 24 May 2014, Bouchard beat Karolina Pliskova of the Czech Republic 6–2, 4–6, 6–3 in the final of Nuremberg, Germany, for her first Women’s Tennis Association (WTA) title. Bouchard was the first Canadian woman to win a WTA tournament since 2008, when Aleksandra Wozniak of Montréal won in Stanford, California.

Bouchard received her second consecutive Bobbie Rosenfeld Award in 2014, the first back-to-back winner of the award since speed skater Cindy Klassen won in 2005 and 2006. Her other achievements in 2014 included helping Canada reach the World Group stage of the Federation Cup for the first time, reaching a career high fifth in the WTA rankings, being named the most improved player on the WTA Tour and qualifying for the WTA Tour Finals in Singapore.

The highlight of Bouchard’s 2015 season came in January, when she beat American superstar Serena Williams 6–2, 6–1 at the Hopman Cup in Perth, Australia. That month she also advanced to the quarterfinals of the Australian Open, where she lost to Maria Sharapova.

However, after her impressive showing in January, Bouchard had difficulty recording victories. From February to October 2015, Bouchard only won eight of 26 matches. She also dropped to 49th in the WTA world rankings.

Bouchard started 2016 on a strong note, advancing to finals in Hobart, Australia, in January and Kuala Lumpur, Malaysia, in March. In November 2016, Bouchard was ranked 46th in the world, a slight improvement from the previous year.

Bouchard Named Most Marketable Athlete in the World

Bouchard has been featured on the cover of Flare Magazine (summer 2015) and Chic Magazine (spring 2014), and has appeared in Vogue, Fashion Magazine and Elle Canada. In December 2014, she signed a one-year contract with WME-IMG, a sports management firm and became a client of IMG Models, leading to sponsorship agreements with Nike, Rolex watches, Beats headphones and Aviva Insurance. She also has marketing deals with Coca-Cola Canada, Babolat tennis racquets, Pinty’s Delicious Foods, Rogers Communications and Usana Health Sciences. In 2015, British magazine SportsPro named Bouchard the most marketable athlete in the world. 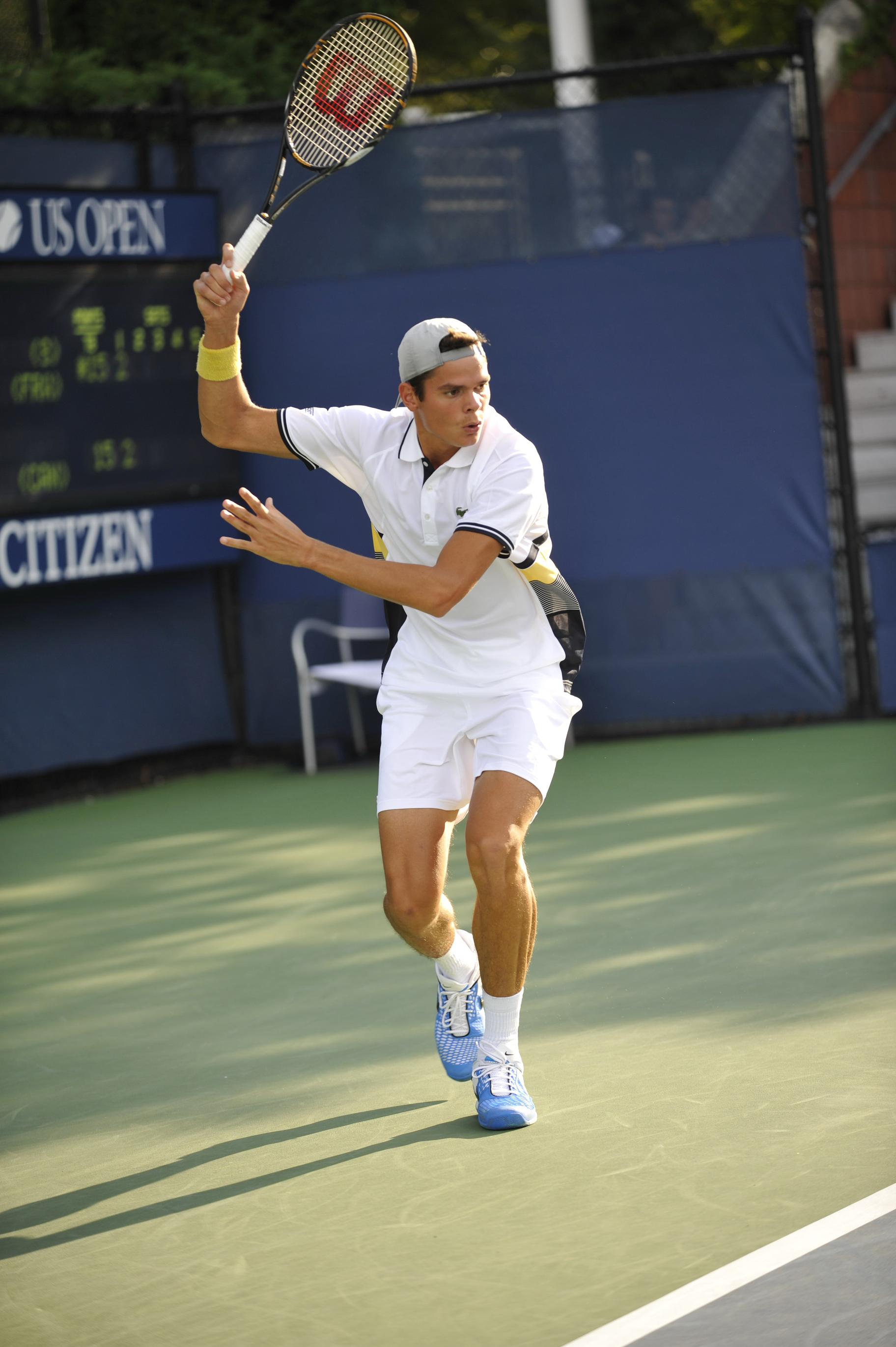