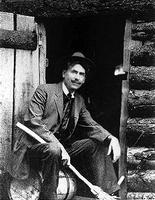 Ernest Thompson Seton, author, naturalist, artist (b Ernest Thompson at Shields, Eng 14 Aug 1860; d at Seton Village, Santa Fe, New Mexico 23 Oct 1946). Seton is remembered for his part in the creation of a distinctively Canadian literary genre: the realistic animal story. He spent his boyhood in Ontario, graduated from the Ontario College of Arts in 1879 and then studied at the Royal Academy in England. He studied art in Paris and was soon in demand as an illustrator. His most famous painting, The Sleeping Wolf, won first prize at the annual competition held at the Paris Salon. He moved to the US in 1896 where he published his first collection of animal stories, Wild Animals I Have Known (1898). It contained his most famous story, "Lobo, the King of Currumpaw," and has since been translated into many languages. This was followed by more than a dozen additional collections of similar stories, which won him international acclaim.

In 1906, Seton published Two Little Savages; Being the Adventures of Two Boys Who Lived as Indians and What They Learned. Based on his childhood experience of "playing Indian" in Ontario, it is now considered a classic of children's literature. This was followed by numerous books on woodcraft, one of which formed the basis for the Boy Scouts of America Official Manual (1910). In 1910, Seton joined Lord Baden-Powell (British) and Daniel Beard (American) in establishing the Boy Scouts of America. Seton's charismatic appeal made it hard for the association to get rid of him. He levelled charges of militarism and they, in turn, charged him with pacifism. Finally, in 1915, he was expelled on the pretext that he was not an American citizen.

In the meantime, Seton had intensified his scientific activities. In 1908 he published the 2-volume The Life Histories of Northern Animals: An Account of the Mammals of Manitoba. After a trip to the far north, he also published The Arctic Prairies: A Canoe Journey of 2000 Miles in Search of the Caribou (1911). Between 1925 and 1927 he published 4 volumes in a series entitled Lives of Game Animals, for which he was awarded the John Burroughs and Elliott Gold Medals.

Seton spent the last 16 years of his life near Santa Fe, New Mexico, and took out American citizenship in 1931. With his second wife, Julia Buttree, he set up Seton Village, a study centre for naturalists which is still active. Until his death, he remained so bitter about his conflict with the Boy Scouts of America that he was persuaded to leave out all mention of it in his autobiography, Trail of an Artist-Naturalist (1940).