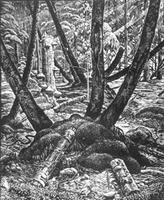 Ernest Lindner, artist (b at Vienna, Austria 1 May 1897; d at Saskatoon 4 Nov 1988). Lindner came to Canada in 1926 and worked first as a farm labourer in Saskatchewan. By 1931 he had won local recognition as an artist and by 1933 was beginning to exhibit in eastern Canada. Lindner is best known for his works in watercolour and pencil, although he produced linocut and wood-block prints and studied etching and lithography. The subject that concerned him most was the cycle of life, and his preferred metaphor was the plant life of northern Saskatchewan forests. Lindner's later images are often composites of human and plant forms, overlapping and blending into each other. He was a superb craftsman and was noted for the tenacity of his ideas. He was elected a member of the Royal Canadian Academy of Arts in 1977 and was an Officer of the Order of Canada. His works are found in the collections of the National Gallery of Canada in Ottawa, the Glenbow Museum in Calgary and the Winnipeg Art Gallery.