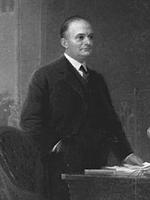 Ernest Charles Drury, leader of the United Farmers of Ontario in 1914 and Ontario Premier, 1919-1923 (Ontario Archives).

Ernest Charles Drury, farmer, politician, writer, local historian, premier of Ontario 1919-23 (b at Crown Hill, Ont 22 Jan 1878; d at Barrie, Ont 17 Feb 1968). A son of Charles Drury, Ontario's first minister of agriculture, and a graduate of Ontario Agricultural College, Drury was active in the farm movement, serving as secretary of the Canadian Council of Agriculture and master of the Dominion Grange and Farmers' Alliance. He was a co-founder and first president of the UNITED FARMERS OF ONTARIO, formed in 1914 to promote agrarian interests in the province.

After WWI the UFO became a political force, but Drury was not a candidate when it challenged the Conservative government in the Ontario general election of 1919. With the support of labour it won enough seats to form a government, and it called on Drury to lead it.

He became the province's 8th premier and won a seat in Halton in February 1920. His administration was noted for important social legislation and for the strict enforcement of the Ontario Temperance Act. Following the defeat of his government in 1923, Drury retired from provincial politics and ventured unsuccessfully into the federal field as an independent Liberal. In 1934 he was appointed sheriff and registrar of Simcoe County and devoted considerable time to writing on public affairs and preparing local histories - Forts of Folly (1932), an attack on the tariff, and All for a Beaver Hat (1959), a history of early Simcoe County. His memoirs, Farmer Premier, were published shortly before his death.