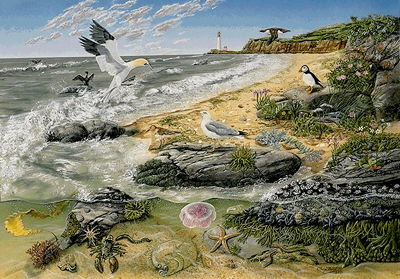 The Atlantic Maritime region extends from the mouth of the St Lawrence River across New Brunswick and into Nova Scotia and PEI. The ocean has a major impact on this zone and its wildlife (artwork by Claire Tremblay).

The environment is the physical, social and psychological milieu in which humans exist. Throughout Earth’s four-billion-year history, profound changes have occurred in its geological and ecological systems. As long as human populations remained small and communities were part of local ecosystems, most changes took place slowly and seemingly without major disturbances in the global system.

Deforestation, soil erosion and salinization, and in some cases climate change contributed to the collapse of many ancient civilizations around the world. The exponential growth of the human population and extensive industrialization have, however, placed stresses on the complex processes that maintain the stability of the biosphere (i.e. the relatively thin but highly complex layer on and above the surface of the planet consisting of the atmosphere, water, minerals and organisms).

Disturbances in one part of the biosphere do not necessarily remain localized but can affect its composition and stability elsewhere. For example, the release of chlorofluorocarbons (CFCs) in the Northern Hemisphere has thinned the ozone layer over the South Pole, sulphur compounds produced by industrial activity in the United Kingdom and continental Europe have caused a marked decline in the biological productivity of lakes in Sweden, and harmful changes in lakes in Ontario are attributable to pollutants from both the United States and Ontario itself. 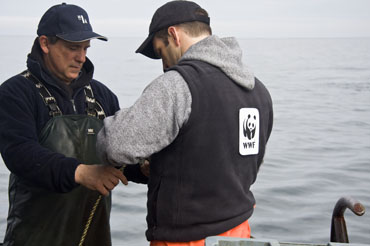