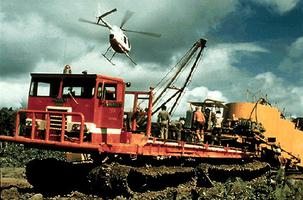 Canadian vehicle specially designed for use in the Canadian North is now used worldwide, as here in the oil fields of Indonesia (courtesy Canadian Foremost Ltd).

Engineering, in its broadest sense, is any activity that applies scientific and mathematical knowledge to the solution of material problems. The modern profession of engineering is involved with designing, building and manufacturing most of the devices, systems and structures that characterize technical civilization. Engineering touches virtually every human activity in industrial society, from computers, space vehicles, LASERS and SATELLITE COMMUNICATIONS to buildings, roads, harbours, sewage systems, food packaging and paper manufacturing.

To some extent, the history of engineering is the history of humanity's progress in using tools and observations on the nature of matter to overcome physical limitations and to modify, harness and control the natural environment. Highly organized, complex engineering works were a prominent feature of many of the civilizations of antiquity, where abundant technical skill developed in the design and construction of fortifications, monuments, roads, aqueducts, irrigation networks and other installations, some of which are still in use (seeENGINEERING, HISTORY OF).

The engineering profession is the result of 2 important developments that took place in Europe during the 18th and 19th centuries: the Industrial Revolution and the increasing reliability of science. As the industrial production of factories surpassed the output of craftsmen and artisans, both the scope of engineering and the demand for engineering skills greatly increased. Science became the principal means of technical advance, allowing engineers to predict the behaviour of materials and natural forces with increasing accuracy. Engineering schools were founded around the world during this time; specialized engineering disciplines began to develop and the stage was set for an explosion of technical knowledge in the 20th century.

Estimates suggest that the volume of scientific and technical knowledge now doubles every 20 years or less. Since no one person can possibly be familiar with all knowledge relevant to a given field, today's engineer most commonly works as part of an engineering team, with scientists, technologists, technicians and other specialists. Thus, in addition to training in MATHEMATICS, PHYSICS, systems analysis, CHEMISTRY and other sciences required by a particular engineering discipline, engineers require good communications skills to be effective in a team context. As most engineering requires compromise between the competing demands of economy, performance, compatibility with existing systems, environmental concerns and other factors, engineers also require good judgement, creativity and diplomacy to achieve the best use of limited materials, energy and human resources.

Relationship with Other Sciences

Engineering calls upon knowledge from all the disciplines of science in combinations that reflect the engineer's specialization and the nature of a given project. Mathematics, physics and their applications in the materials sciences are fundamental to the study and practice of engineering. While computers and computerized design aids have reduced the burden of performing extensive calculations, skill in advanced mathematical procedures remains essential for engineering work. Depending on the area of specialization, an engineer may require advanced study of one or more related disciplines, eg, physics, chemistry, geology, oceanography, biology and medicine. Engineering training in Canada also involves study of the humanities and social sciences; economics and sociology help the engineer evaluate the impact of new technologies and assess the socioeconomic dimensions of technological problems. Business management studies can be invaluable assets to the financial and management aspects of engineering.

Engineering generalists are concerned with integrating the work of specialists from the engineering and scientific communities, a role that demands wide general knowledge of engineering and the sciences. Many problems require an engineer to use knowledge outside the scope of formal engineering training. This factor, combined with rapidly changing technology, leads most engineers to continue to study throughout their careers.

In the first half of the 19th century, Canadian engineers were trained as apprentices in the offices of established professionals such as Samuel KEEFER or Sir Casimir GZOWSKI. In 1854 the first engineering school in Canada was established at King's College (now University of New Brunswick). Other applied science courses were established by the 1870s at McGill and l'École polytechnique de Montréal and at the School of Practical Sciences (now part of U of Toronto). Engineering education has continued to grow in Canada throughout the 20th century. One of the most significant areas of development, in which Canada is a world leader, has been in petroleum engineering. The U of Alberta established the first petroleum engineering degree program in Canada in 1948 and continues to offer BSc, MSc and PhD degrees. More than 200 engineering programs offered at 35 Canadian universities are accredited through the Canadian Accreditation Board, a committee of the Canadian Council of Professional Engineers. Programs are certified to meet minimum quality standards for entry into the profession. University graduates normally undergo a 2-year apprenticeship before being registered with the provincial engineering association as a Professional Engineer (PEng).

Prospective engineers who lack the necessary educational requirements may become registered by passing exams offered by the associations. Many Canadian engineers wear the IRON RING as a symbol of their professional obligation.

Canada's engineering organizations fulfil several roles: some regulate and administer the profession; others facilitate an interchange of technical ideas between engineers working in the same field or arrange exchanges between engineers and other groups within society or with engineers in other countries; still others are concerned with advancing the purposes of an engineering occupation or industrial sector. The engineering profession is regulated by provincial legislation, administered through the 10 provincial and 2 territorial engineering associations. The CANADIAN COUNCIL OF PROFESSIONAL ENGINEERS was organized in 1936 to co-ordinate the activities of the provincial associations. Its membership represents about 95% of Canadian engineers. Its activities include monitoring (accrediting) university engineering undergraduate education and providing statistics on engineering manpower. The first association of practising engineers in Canada was the Canadian Society of Civil Engineers, formed in 1887, which became the Engineering Institute of Canada in 1918. Other engineering organizations are the Canadian Society for Chemical Engineering, the Canadian Institute of Mining and Metallurgy, the Association of Consulting Engineers of Canada and the Institute of Electrical and Electronics Engineers.

Industrial (or Intellectual) Property
Industrial property rights are covered by PATENTS, COPYRIGHTS and TRADEMARKS. Patents and copyrights are means of protecting original creative ideas; trademarks offer rights to an original trade name. Patents are granted to a new invention meeting certain conditions, giving the patent holder a monopoly of rights to the invention for a specified period. Copyrights cover every original literary, dramatic, musical and artistic work and generally refer to the sole right to reproduce the work or any part of it. Of special interest to engineers are provisions of the copyright act dealing with engineering drawings, which preclude a client from reproducing or repeating the design without permission from the engineer who produced the drawing.

Safety
Professional engineers are responsible for the health and safety of people who may be affected by their work, and may be held liable for injuries resulting from failure to perform to a reasonable level of competence.

Naval architecture concerns the design of oceangoing vessels and includes both an understanding of the physical influence of the sea and the ability to conceive designs integrating the piping, electrical circuits, structural members and other subcomponents into a compact and functional whole (seeSUBMERSIBLE).

Industrial engineering is the field dealing with the effective management of manpower, machinery and materials in the industrial production environment. Using systems analysis, queuing theory (ie, the study of waiting-line processes), statistics and other mathematics-based disciplines, the industrial engineer assumes direction of such industrial functions as plant design, materials handling, automation and industrial quality control, and implements the use of computers and data-processing procedures in the production cycle (seeROBOTICS).

Aeronautical engineering deals with the design, construction, testing and maintenance of aircraft and their components and may include many specialized areas related to AERODYNAMICS, materials, propulsion and the myriad problems related to flight.

Metallurgical and materials engineering is concerned with the extraction, alloying, shaping and fabrication of metals and related materials. The practitioner is well versed in chemistry and physics, with a strong emphasis on thermodynamics, high-temperature and solution chemistry and electrochemistry, the principles of solidification, phase transformations in the solid state, corrosion and deformation, and is familiar with an extensive range of chemical, optical and microanalytical techniques and physical testing methods. Thus, there is very little professional distinction between the metallurgical engineer and the metallurgist. (SeeMETALLURGY.)

Natural or artificial forces may cause fluids to be stored or to move within structures or traps in the porous rocks of the Earth's crust. Petroleum engineering is concerned with locating and delineating such traps (reservoirs), determining the nature and quantity of the fluids they contain and the orderly and economic exploitation of such fluids. Another concern is the injection of fluids into reservoirs to store or dispose of them, or to use them to remove the reservoir's original contents. Discovery, production, transportation, processing and marketing of petroleum and petroleum products requires the interaction of many specialists during road building and the preparation of well sites and production, pumping and treatment facilities, pipelines, etc. (SeePETROLEUM and PETROLEUM INDUSTRY.)

Engineers may also be classified according to the work they do. Thus, for example, the design engineer creates the plans and specifications for a particular job, drawing plans and details of each part, indicating how the parts fit together and preparing specifications of the materials to be used and performance standards to be maintained. Design may be in satellites, heart-lung machines, offshore drilling rigs, etc. The construction engineer supervises building, working from detailed plans. In industrial processes the research engineer performs applied science and engineering research on processes and products. The development engineer develops products based on scientific and engineering research. The operating engineer manages industrial operations and production facilities. The production engineer works to find the most economical way of transforming raw materials into finished products. The service engineer supervises the installation or repair of equipment delivered to a client.