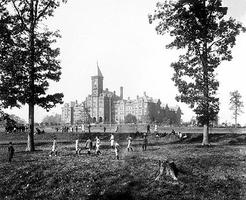 Upper Canada College, Toronto, in the 1890s. UCC is still the private school most often cited as preserving the social and economic elite of Canada (courtesy Library and Archives Canada/RD353).

As used every day, elite is an adjective referring to the upper echelon of any activity - eg, elite athletes or elite soldiers. Used more analytically as a noun, elites are those who hold the uppermost decision-making positions in important activities organized in a definite hierarchy. Those who occupy such positions are powerful because of key places they hold, not necessarily because they are "the best." Elites analysis, which has a long scholarly tradition, differs from more popular notions such as the "establishment," which is social and reputational in its meaning. The Debrett's Illustrated Guide to the Canadian Establishment, edited by Peter C. Newman, for example, has its orgins in Debrett's Peerage, founded in England in 1769, but there is no Canadian aristocracy to follow. Instead there is a listing of the "Debrett's Six Hundred" drawn from academe and religion, arts and media, business, public service and military, law and science and medicine. They are reputed to be the "most influential, accomplished and powerful people alive in Canada" but are not selected because of positions of power that they occupy. This type of publication tends to celebrate the social trappings of power rather than analyse it, as is the goal of elite studies.

To examine society's elites it is necessary first to locate the most powerful activities within society; second, to identify the uppermost or decision-making positions within these activities; and finally to specify the characteristics of the people holding these positions. Power may be defined as the ability to mobilize society's resources, including people, money, military strength, opinions and goods or services. At a given time, the military, politicians, religious leaders or economic leaders may be the most powerful actors in a society. To determine which activity or activities are most powerful, the organization of a society must be examined. According to the materialist perspective, no matter what institution is the most powerful politically, a society reproduces itself through the production of a means of living (food, clothing, shelter) and therefore the economy is always a fundamental activity, whether organized by religious, political, military or business leaders. Those who control the economy are always a powerful elite within any modern society.

To determine which are the uppermost positions within the most powerful activities, researchers examine how these activities, such as those of the church, labour unions, the military, corporations or the state, are organized. In government, for example, PRIME MINISTERS or PREMIERS and their CABINETS occupy the most powerful positions; in corporations it is the executive (chief executive officer or president) and board of directors; in the military, generals; in labour, the executive offices within unions and labour centrals; in the church, archbishops.

"Uppermost positions" refers to 2 phenomena, both related to the idea of hierarchy. In the corporate world, corporations such as the Royal Bank of Canada (22 times the size of General Motors, Canada) are very large while others - eg, B.C. Bancorp - are relatively small. The most powerful banks can be identified by their assets or profits. In 1995, the 5 largest Canadian banks all reported record profits of over a billion dollars. The uppermost banks ("dominant corporations") clearly rank above the other banks.

In Canada's case the dominant banks include the ROYAL BANK OF CANADA, the CANADIAN IMPERIAL BANK OF COMMERCE, the BANK OF MONTREAL, the BANK OF NOVA SCOTIA and the TORONTO DOMINION BANK. Among themselves these 5 banks control over 90% of the assets, income and profits of all banks in Canada. The Toronto Dominion Bank is the smallest of the 5 dominants but has twice the assets of its closest rival, the NATIONAL BANK OF CANADA. These dominant corporations are the power bases for Canada's economic elite.

Another hierarchy is reflected in the internal structure of the corporation. Those in the uppermost positions (eg, executive and directors) decide the corporation's direction. In the case of the banks, the executive and board of directors establish policy, review the performance of management and approve or disapprove large loans or investments.

Among the 113 dominant corporations (each controlling many other corporations or subsidiaries) that were identified as being in command of the Canadian economy, there were 1848 interlocked positions, 56% of which were interlocked with important positions on American corporations.

Statistics Canada found 6 conglomerates controlling 723 Canadian companies centered on key families: the Westons (123), Blacks (123), Demaraises (121), Irvings (121) and 2 branches of the Bronfmans (Charles Rosner with 118 and Edward and Peter with 117).

The more elites tend to resemble one another as particular social types and are distinguishable from the society in general, the more it can be concluded that access to an elite is exclusive and biased in favour of certain social types. Of all the elites in Canada, the economic elite is the most exclusive. It is overwhelmingly male; only 8 of its 798 members (or 1%) are women. As recently as 1990 only 7 of 1169 chief executive officers listed in the Financial Post Directory of Directors were women. People of British origins comprise about 87% of the economic elite but only 45% of the entire population; in contrast French Canadians comprise only 8% of this elite but 29% of the population. Of the "noncharter" (neither French nor British) ethnic groups, only Jewish Canadians surpass their proportion of the population (4% of the elite and 1% of the population), while all other ethnic groups are seriously underrepresented (1% of the elite but 25% of the population).

Members of the state elite share some common features with the corporate elite, but there are important differences. In The State Elite, an update of Porter's work, Dennis Olsen divides the state elite into political, bureaucratic and judicial elites. The first comprises prime ministers, premiers, federal Cabinet members and provincial Cabinet members holding the top posts in the largest provinces (Québec, Ontario, Alberta and BC). Women, again, are seriously underrepresented, accounting for only 2% of these office holders between 1961 and 1973.

French Canadian representation in the political elite is greater than it is in the corporate elite; between 1961 and 1973 it rose to 25% from 22% between 1940 and 1960. Only 8%of noncharter ethnic groups are represented. Individuals with British origins comprise 68% of the political elite, which, like all the state elites, is overwhelmingly middle class in its origins (69%). Nevertheless, the upper class is still overrepresented (22%), and the working class underrepresented (9%).

The bureaucratic elite (deputy ministers and assistant deputy ministers or their equivalents in government departments, crown corporations, regulatory boards and commissions at the federal level and in the 4 largest provinces) are overwhelmingly middle class in their origins (75%) with fewer from the upper class (10%). Only 2% are women.

Ethnically the bureaucratic elite resembles the political elite, and the number of French Canadians in the federal bureaucracy increased from 13% in 1953 to 24% in 1973. The judicial elite - eg, justices of the Supreme Court and chief justices of the federal and provincial courts - are drawn overwhelmingly from the 2 charter groups and are almost all male and somewhat more upper middle class in origin than the other state elites.

Although Porter attempted to identify labour, intellectual and religious elites in Canada, none of these have been studied as intensively as state or corporate elites and it is difficult to argue that they wield the same degree of power. Labour is not organized in the same hierarchical way as the corporate and state worlds. The Canadian Labour Congress, the main labour central in Canada, cannot direct its constituent members in binding ways and the member unions and locals enjoy considerable autonomy. Porter's survey of labour leaders in the early 1950s revealed that they were more representative of a variety of ethnic groups and more representative of the working class.

The most powerful elites, those who command the greatest resources in Canada today, are the corporate and state elites. Studies have demonstrated that entrance to these elites is strongly affected by social-class origins, region of birth and residence, ethnic origins and gender; the most powerful decision-making positions in Canada are therefore held by people who do not represent a cross-section of Canadians.