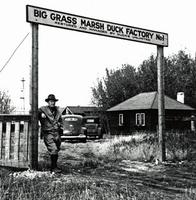 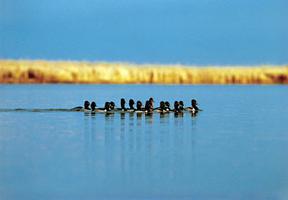 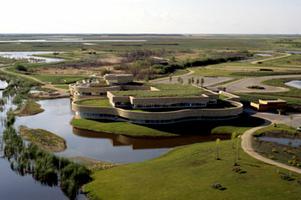 The Oak Hammock Marsh Conservation Centre, located on the edge of a restored prairie marsh, is the site of DUC's national offices and an award-winning interpretive centre operated by DUC in partnership with the Province of Manitoba (courtesy Ducks Unlimited Canada).
PreviousNext

Ducks Unlimited Canada (DUC) is a private, nonprofit organization dedicated to conserving, restoring and managing wetlands and their associated habitats for North America's WATERFOWL, other wildlife and people.

Concern over declining waterfowl populations in the early decades of the 20th century reached a crisis during the Prairie drought of the 1930s. DUC was founded in 1938 - one year after Ducks Unlimited Inc was founded in the United States - to receive money from waterfowl hunters for wetland habitat conservation projects in Canada. Since establishing its first project in 1938, Big Grass Marsh, 120 km northwest of Winnipeg, DUC has conserved 2.4 million ha of critical wetland habitat and influenced 19 million ha more, and has completed 8400 habitat conservation projects throughout the country.

In recent years growing pressure from agriculture, industry and urbanization has led to the disappearance of up to 70% of wetlands in settled areas. DUC is a leading advocate for effective wetland conservation policies that protect and restore wetlands across the country. Each year, DUC's conservation efforts support nearly three-quarters of the continent's waterfowl populations that breed in Canada, particularly on the PRAIRIES and the western boreal forest. This is accomplished through scientific research, various conservation programs, education and fundraising initiatives. A program partner of the North American Waterfowl Management Plan (NAWMP), DUC also works with other nonprofit organizations, all levels of government, landowners and industry to help reach its conservation goals.