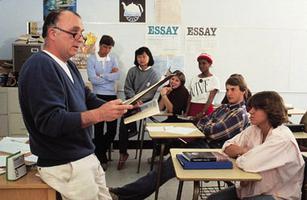 Brian Doyle, children's novelist (b at Ottawa 12 Aug 1935). After a journalism degree from Carleton University (1957), he worked briefly for the Toronto Telegram. Brian Doyle returned to Carleton for a BA in English and became a high-school teacher in Ottawa. In 1991 he received the Vicky Metcalf Award for a distinguished body of work. Although Doyle's first-person narratives depend on eccentric characters and repetitive comic episodes, they prove significant themes about tolerance, love and reconciliation. Inspired by his children, his first books, Hey, Dad! (1978) and You Can Pick Me Up at Peggy's Cove (1979), describe symbolic journeys to maturity. Angel Square (1984), Spud Sweetgrass (1992) and Spud in Winter (1995) are mysteries investigating racial tolerance and social responsibilities. In Covered Bridge (1990), efforts to preserve an old bridge highlight the clash between past and present values, as well as the need for tolerance. Brian Doyle's 2 Canadian Library Association Medal winners are even more complex. Up to Low (1982) blends a tall tale, black humour and religious symbolism to explore the mysteries of love and death. Easy Avenue (1988), a novel of manners, illustrates various meanings of "success."