From its beginnings, the Patriotes and their supporters faced stiff opposition from a group of English-speaking Lower Canadians known as the Constitutionalists. Their aim was to defend British interests in the colony, ensure the Lower Canada’s connection with the mother country, limit the political authority of French Canadians and assimilate them through the union of the Canadas.

Following the 92 Resolutions, which represent the radicalization of the Patriotes, many Constitutionalists felt it was necessary to arm themselves and form a military corps to defend the colony from the Patriote threat. On 16 December 1835, they founded the British Rifle Corps, a volunteer militia. Their aim was to defend “the connection which exists between Great Britain and Lower Canada, and to maintain unimpaired the rights and privileges confirmed to them by the Constitution.” Criticized by Governor Lord Archibald Acheson Gosford, who argued that British interests were not in danger in Lower Canada, the corp dissolved a month later after Gosford himself declared the volunteer military corp illegal.

A few months later, in March 1836, several former members of the British Rifle Corps joined the ranks of a newly created political association and paramilitary organization called the Doric Club, founded by Adam Thom. Born in Scotland, Thom settled in Montréal in 1832, where he became a hated figure amongst French Canadians. In 1835, he became the editor-in-chief of the Montréal Herald, well known for its anti-French Canadian tirades. Thom condemned their customs and laws (see Civil Code), which he maintained had caused acute political and economic difficulties for the British in the colony, and argued that most were traitors that sought the destruction of the British Empire. He also condemned Lord Gosford’s conciliatory policies.

The Doric Club called upon the loyal British population of Lower Canada to unite and defend British interests from the Patriotes. Like the British Rifle Corps, the Doric Club advocated for the use of violence: “If we are deserted by the British Government and the British people, rather than submit to the degradation of being subject of a French-Canadian Republic, we are determined by our own right arms to work out our deliverance.” The Doric Club also blamed the colonial government for the current political crisis, since it refused to end the Patriote threat by sending every agitator to the gallows.

The Doric Club could count on much support in Montréal as the English-speaking community was the majority, which included men such as Thomas Workman, George Moffatt, Peter McGill and John Molson. According to historian Allan Greer, this benefitted them immensely: “wealth, power, and political influence were on the side of the Constitutionalists, and the formidable military establishment naturally tended to be sympathetic.”

Opposed to the Doric Club stood the Société des Fils de la liberté, a paramilitary group that supported the Patriotes. On 6 November 1837, there was a violent altercation on the streets of Montréal between the two groups. Anticipating a public meeting of the the Fils de la liberté, who met on every first Monday of the month, the Doric Club called upon the loyal elements of the city to meet at Place d’Armes — where the Fils de la liberté were meeting — to nip their rebellious spirit in the bud. After the meeting, violence ensued. While André Ouimet, the president of the Fils de la liberté, suffered an injury to his knee, the homes of other Patriotes, such as T.S. Brown, Joshua Bell and Robert Nelson, were vandalized. The office of the The Vindicator, at the time the only pro-Patriote English-language newspaper in the colony, was also vandalized. This confrontation also served as the pretext under which authorities could issue arrest warrants for Patriotes leaders, which led to the start of the Canadian Rebellion.

Though Lord Gosford opposed the Doric Club, Sir John Colborne, who became the commander-in-chief of British forces in British North America in May 1836, was far less concerned. In fact, the Doric Club proved to be a very useful tool in his fight against the Patriotes. In the months leading up to the Rebellion, Colborne sought to reinforce his forces in Montréal and allowed the formation of “Volunteer Corps.” According to Greer, these were “quickly filled by members of the Doric Club.” During the Rebellion, members of the group played an equally important role in arming and organizing volunteers and actively assisted Colborne in his fight against the rebels. The group disbanded after its members joined Colborne’s forces at the start of the Rebellion. 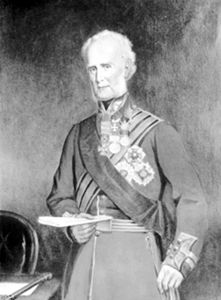 Colborne contributed to the popular unrest that culminated in the reform victory in the 1834 election and ultimately in the Upper Canadian Rebellion of 1837 (courtesy Metropolitan Toronto Reference Library/T15073).