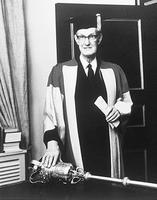 Receiving an honorary degree, 1974. He was one of Canada's foremost historians, known particularly for his skilful writing (courtesy Library and Archives Canada/123984).

Donald Grant Creighton, historian (b at Toronto 15 July 1902; d at Brooklin, Ont 19 Dec 1979). Creighton studied at Victoria College, University of Toronto and Balliol College, Oxford. In 1927 he was hired as a lecturer in U of T's Department of History, becoming professor in 1945, chairman 1954-59 and professor emeritus in 1971. The first of his many books, The Commercial Empire of the St. Lawrence (1937), established him as the foremost English Canadian historian of his generation.

Under the influence of Harold Innis, Creighton adopted as a first principle the idea of the St Lawrence as the basis of a transcontinental economic and political system: the Laurentian Thesis. He was also committed to history as a literary art, and his 2-volume biography of John A. Macdonald won the Governor General's Award (1952, 1955). As a nationalist with a centralist bias, Creighton in later years spoke out against the threats of continentalism and regionalism. His histories became increasingly didactic and he frequently turned to journalism, where unfortunately his views were open to caricature and exploitation. 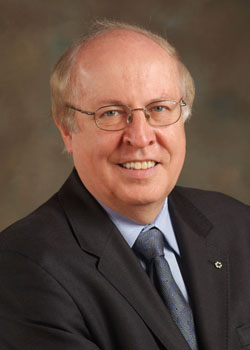