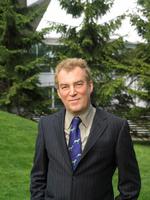 (Photo courtesy of the Stratford Festival)

Desmond McAnuff, director, writer, composer (born at Princeton, Illinois 19 Jun 1952). Des McAnuff is a former artistic director of the STRATFORD FESTIVAL in Ontario, director emeritus of La Jolla Playhouse and director of such Broadway musicals as Big River, The Who's Tommy and Jersey Boys.

McAnuff grew up in Guelph and Scarborough, Ont, where he attended high school at Woburn Collegiate Institute and composed the music and lyrics for Urbania, the first of several rock musicals. He studied in the theatre department at Ryerson Polytechnical Institute (now Ryerson University) from 1971 to 1973.

Des McAnuff directed his own plays and musicals in the burgeoning Toronto theatre scene from 1971 to 1976 and composed the music for Michael ONDAATJE's The Collected Works of Billy the Kid for Toronto Free Theatre in 1974. Leaving Toronto for New York, he made his directorial debut at the Chelsea Theater Center in 1977. In 1978 he co-founded Dodger Theater and directed the company's first production of Barrie Keeffe's Gimme Shelter, which won the Soho Arts Award for best Off-Broadway direction. In 1979 McAnuff directed his own play Leave It to Beaver Is Dead at Joseph Papp's Public Theater and it won the Soho Arts Award for best Off-Broadway play. As artist-in-residence at Joseph Papp's Public Theater in 1982 he wrote, composed, and directed the acclaimed The Death of Von Richthofen as Witnessed from Earth.

In 1982 he was named artistic director of the La Jolla Playhouse in California with the goal of reviving the once-illustrious theatre founded in 1947. During his tenure as artistic director (1983-94 and 2001-07), McAnuff directed 34 plays and musicals and produced 124 shows. Under his stewardship the La Jolla Playhouse won over 300 awards for excellence and fully a third of its productions moved on to other theatres across the country and around the world, including 14 productions on Broadway. Of these McAnuff won 2 Tony Awards for best direction of a musical - for Big River in 1985 and The Who's Tommy in 1993. For the latter McAnuff also won the Olivier Award for best direction in 1996. He was nominated for Tony Awards in 1993 with Pete Townsend for The Who's Tommy, in 1995 for How to Succeed in Business Without Really Trying and in 2006 for Jersey Boys. For the latter he was also nominated for the Olivier Award in 2009, and in Toronto that year he won the DORA AWARD for the play. In 2006, Des McAnuff was given the Drama League Julia Hansen Award for Excellence in Directing in recognition of his work throughout his career.

McAnuff has also ventured into the realms of film and opera. In 1998 he directed Cousin Bette starring Jessica Lange and in 2000 The Adventures of Rocky and Bullwinkle starring Robert DeNiro. In 1999 he produced the animated movie Iron Giant and in 2001 the film Quills. The first opera he directed was Alban Berg's Wozzeck in 2007 for San Diego Opera, followed by Gounod's Faust for the English National Opera in 2010.

In 2007 Des McAnuff was appointed as co-artistic director of the Stratford Festival along with Marti Maraden and Don Shipley. Upon the resignations of Maraden and Shipley in 2008, McAnuff became the festival's sole artistic director while still pursuing international directing commitments. Among his contributions to the festival were his pursuit of colour-blind casting for all productions and his invitation to scores of American actors, designers and directors to work at the festival for the first time. Following the lead of the Metropolitan Opera in New York and the National Theatre in London, McAnuff instituted the simulcasting in high definition of selected Stratford productions - of Shaw's Caesar and Cleopatra in 2008 and of Shakespeare's The Tempest in 2009, both starring Christopher PLUMMER, directed by McAnuff and filmed for television. His term as artistic director ended in the fall of 2012, but not before his presence turned the spotlight of international attention on Stratford and made many of its productions popular and successful events.

In stage productions McAnuff's style is characterized less by close textual reading than by high theatricality, making much use of stage machinery. As indicated by the awards he has won, this is a style perhaps better suited to the spectacle of the musical than to the nuances of the spoken word.

A documentary film titled Des McAnuff: A Life in Stages was broadcast on television in 2010. Ryerson University awarded him an honorary doctorate in 2011. In 2012 he won a GOVERNOR GENERAL'S PERFORMING ARTS AWARD and became a member of the ORDER OF CANADA.